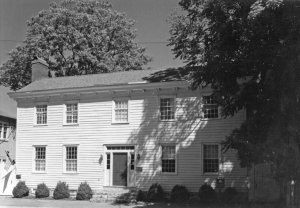 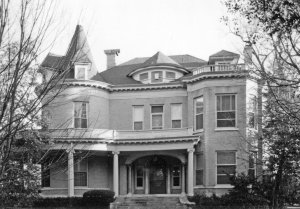 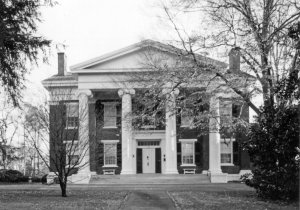 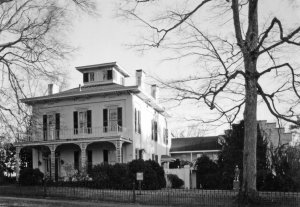 While Williams Avenue is a short street (two blocks), it contains some of the most interesting buildings in the District. The c. 1818 Public Inn at No. 205 is a rare clapboarded Federal Period house. Very few of clapboarded construction have survived (See 516 Franklin St.). The original location of the house was at the northeast comer of Madison Street and Williams Avenue. In 1926 it was moved to Avenue when its original site was used, for a service station.

Next in age is the c. 1824 Mastin house at No, 310, with its Italianate remodeling dating from the 1850s (wide, bracketed eaves, hood-moulds over the windows, rooftop cupola, lacy cast-iron veranda). An unusual feature of No. 310 is the Federal Period west service building with its "crow-step" brick gables, a feature originally from Renaissance Holland which transferred to England and thence to America in the 18th and early 19th century. Williams Avenue has a second such crow-step gabled service building at No. 210, a survivor from the Federal Period house that once was at this site.

A forceful and dignified house on Williams Avenue is No. 300, the c. 1836 Governor Thomas Bibb house, a powerful work in the Greek Revival style with "grand order” (two-story) Ionic columns supporting a temple-front pediment of large dimensions. The proportions and balance of the design are excellent, and while the house is of imposing dimensions, it is quietly dignified. The wood fence and gate fronting the Governor Bibb house is of the type and proportions to be expected of c. 1836 and is thought to be original; a very rare survivor if so.

No. 210, built in 1901, is the District's only example of the Chateauesque style, so called because of the obvious influence of the French Renaissance Chateaus of the Loire Valley. The cylindrical tower with the steep conical roof is a feature seen in such Renaissance examples as the 15th Chateau de Azay le Rideau. This house retains its scenic-painted wall-canvas in the entry. As mentioned above, the crow-step gabled service building dates from a previous Federal Period house that occupied this site and which can be seen on the [1861 Huntsville Map Detail 1861 map] and the [1871 Huntsville Map (B&W) 1871 Bird's Eye View].

No. 301 is a Colonial Revival house built about 1940, and freely mixes a Baroque-Georgian sculptured entry surround with a classical Ionic portico. Its large east wing was added in 1997.

No. 312 was once a beautiful Second Empire style house with a tall bell-cast (curved) mansard roof, a photograph of which is in the collection of Harvie P. Jones, FAIA. A fire in the 1960 period removed the attractive roof, and other additions to convert the house for apartments have disguised its former beauty. With appropriate changes, it can be beautiful again.