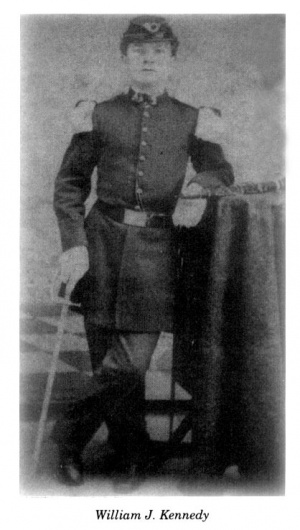 Madison County is the final resting place of a Union soldier who professed to have blown the final bugle call of the Civil War. According to information supplied by William J. Kennedy’s great grandson, Clayton E. Yarbrough of Athens, Kennedy was born in November of 1844 in New Jersey and was apparently orphaned at an early age. He enlisted with the Union Army at age 15 and was assigned as a “music boy” in Company A of the 16th regiment of U. S. Infantry at Governor’s Island, New York. Kennedy served for a total of eleven years, receiving his final discharge in 1871 at Mobile, Alabama.

His Civil War service record shows that Kennedy was involved in all of the battles fought by his company except the Battle of Corinth in Mississippi. While stationed at Lookout Mountain near Chattanooga, he met a Southern girl, Julia Ann Jennings of Walker County, Georgia. She was born in South Carolina on December 14, 1849, five years younger than Kennedy. They were married in August of 1865 at Blowing Springs, Georgia, when he was 20 and she was only 15. The marriage occurred between enlistments by Kennedy, as he was discharged twice before his final enlistment in 1868 in Atlanta as a “Principal Musician”. This was also his title in 1865. According to a clipping of an old Chattanooga newspaper with the heading “LAST BUGLE CALL” and a subheading of “It was blown by Wm. J. Kennedy at the close of the war,” Kennedy used his talents to denote the end of the war at Chattanooga. The article continued “William J. Kennedy of Athens, Ala., who claims to have sounded the last bugle call at the close of the Civil War, on Lookout Mountain, is spending a few days in Chattanooga sight-seeing. Mr. Kennedy has not been here before in forty-three years, and he is quite enthusiastic over the many changes that have taken place.”

“Mr. Kennedy says that he was chief bugler for the First Division of the Fourteenth army corps of the federal army, having enlisted in the Sixteenth Infantry. He has a son, George Kennedy, who is enlisted in the Twelfth Cavalry at Fort Oglethorpe.” While the clipping has no date shown, it obviously was printed around 1908 or later, considering that the war ended in 1865 and it had been 43 years since Kennedy had been in Chattanooga.

The 1870 census shows Julia Ann Kennedy and a daughter living in Huntsville, while William was apparently stationed in Mobile, Alabama. William worked as a house painter while residing in Madison County after his enlistment ended. One of the family stories holds that he fell and broke both wrists while painting the fire station in Huntsville. In 1877 he moved his family to Limestone County, one mile west of Limestone Creek, along today’s Copeland Road. There he began to farm the land, but he still painted structures on occasion. One of his projects was to paint and grain the wooden front doors of the Presbyterian Church in Athens out of respect for its Pastor Barbee.

At some time after 1880 the family moved to the Jennings Chapel Community to be near Julia’s relatives. William and Julia lived out the duration of their lifetimes there, with William dying in 1910 and Julia dying in 1913. Both are buried in the old Center Hill Cemetery, along with their son William Jennings Kennedy, who also died in 1910 according to the article about the family in the book “The Heritage of Limestone County, Alabama” (by committee, 1998). The cemetery is located on the east side of Love Branch Road just south of McKee Road and north of Yarbrough Road and Harvest Road in Madison County. The cemetery today is overgrown according to Clayton Yarbrough, and it is in need of clearing and restoration. Perhaps someday an Eagle Scout candidate will take on the project and commemorate the life of a Union soldier who closed out the Civil War and chose a new life by setting roots in the South.