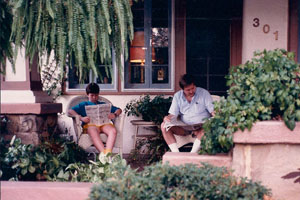 Deane & Chris on the Porch at 301 Lincoln Street

We moved from Charlotte, North Carolina in the summer of 1985. We had lived in and loved older homes, and had hoped to find one on the market in Huntsville. The house at 301 Lincoln Street was the only one that fit our criteria and our pocketbook at the time. I had a long list of things I wanted to do to the house, but Deane was quickly consumed by his work. However, we did manage to upgrade the kitchen, the laundry area, some floors and a bathroom in the thirteen years we lived there.

From the very first day, we thoroughly enjoyed the house. The flow of the rooms was perfect for parties and gatherings. And the house just seemed to be a magnet for people and celebrations. When we had spare minutes, we sat on the ample front porch. When friends saw us there, they stopped to chat. There seemed to be an almost constant parade of characters entertaining us. We have never lived in a place that invited so much social interaction.

Our son, Chris, was in third grade when we moved to Huntsville. He attended Randolph with a few other children from the area. They had their own special relationship with the neighborhood. It is a mile around the block bounded by Lincoln, Echols, White and Eustis. The houses were on the edge, leaving much wildness in the middle. The kids would explore for hours. As they got older, their domain expanded to events at the railroad station, the library, Big Spring Park, the Civic Center and Goren's. The environment was enriching. I felt a great sadness when we left that house in the summer of 1998. I knew we would never again live in the house that had helped us raise Chris.