•  "Promotion of Captain Woolsey Finnell, Jr., son of Col. And Mrs. Woolsey Finnell of Tuscaloosa to the rank of lieutenant colonel and executive officer of the One Hundred Fifty-first Engineers, Alabama National Guard, was announced yesterday by the State Military Department, according to an Associated Press dispatch form Montgomery. The promotion became effective today, making Finnell second in command to Col. Edwin W. Jones, of Huntsville. Captain Finnell has headed Company B at Decatur, Ala., for several years. The unit is scheduled for induction into the federal service January 27 at Huntsville. Captain Finnell is a graduate of the University of Alabama. He has a host of friends in Tuscaloosa. He is 34 years old and has resided in Decatur for the past several years." - Promoted

•  In October, 1970, Woolsey Finnell was honored with a group of former Tuscaloosa High Scnool athletes. Each had his own special memories and this is what was reported of Finnell's comments: "there was Finnell, now Huntsville's city engineer, marveling at the changes in equipment and remembering that the only way you missed a game in the past was because you were a hospital case." - Hall of Fame

•  There is a Finnell family folder in the Heritage Room vertical files of the Huntsville-Madison County Public Library. - Editor's Note


Related Links:
•  Abstracts - It looks like his father, Col. Woolsey, was the director the State Highway commission in 1930.


•  Ancestry.com - Page owned by elderman1 and can be viewed only with an Ancestry.com paid subscription.
•  Find A Grave - Page created by Heather
•  Hall of Fame - The Tuscaloosa News, Oct, 1970.
•  Promoted - Jan. 19, 1941 newspaper article from the Tuscaloosa News.
•  Record - A Dream Come True: The Story of Madison County and Incidentally of Alabama and the United States, Volume II, by James Record, 1978, page 373. 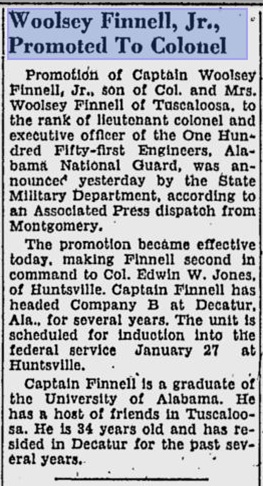