•  Administrator (Principal) in eight schools in Huntsville including Lee High.

•  "Huntsville citizens continued to roll out the carpet for its heroes going off to war. At the Elks Theatre, a dance was held to honor Raymond Jones, Howard Jones, Drury Davis, Felix Newman, William Coyle and Cecil Fain. The community not only supported the Liberty Loan drives, but tried to do much for its local soldiers." - Dance honoring

•  "The year 1919, too, saw formation of the first permanent Boy Scout Troop Number 1 at Merrimack with Cecil Fain as Scoutmaster. The author was privileged, in 1946, to serve as Scoutmaster for this fine troop." - Boy Scouts

•  "In the early years of this century, there were only two large public schools in the vicinity, Madison County High School at Gurley and Huntsville High School. But there were also several smaller schools, those which sprang up around the various mills. These 'mill' schools were to be an important part of Huntsville's heritage until they all merged in 1952 into what is now known as Butler High School.


But for many years, the mill schools, Joe Bradley, Lincoln, Rison and West Huntsville, were separate little kingdoms of their own, zealously protective of their own 'territories' and their own traditions.
Such was the situation when Cecil Fain first came to Huntsville to begin his career as an educator. The year was 1914.
Sixty-three years have passed since Cecil Fain, then a teenage teacher, moved from Ozark, Ala., to Huntsville. Now in his eighties, this extraordinary man is still here, doing as he has done for all his adult life, serving the youth of Huntsville and Madison County.
A teacher in Huntsville's public schools for half a century, Fain presently serves as a special consultant for Alverson-Draughon Business College. And he still works every day, and wouldn't think of having it any other way.
An acquaintance was once asked, 'How would you best describe Mr. Fain?' His reply: 'A great teacher, a great person, and a great sportsman.'
In many respects, Cecil Fain has probably done more for sports in Huntsville than any other man in the city's history.
For years, he has been known as 'Huntsville's Mister Tennis.' That nickname, however appropriate, is not sufficient unto itself. 'Huntsville' s Mister Athletics' would be more accurate.      'When I first came to Huntsville, there wasn't much going on in the way of athletics,' recalled Fain. 'Of course, our country was about to get involved in World War One at that time. It wasn't until after the war that organized sports really got started here.'
When it did get started, the prime mover was Cecil Fain.
About 1920, two years after 'the war to end all wars' had ended, Fain, by then the principal of Joe Bradley School, began organizing junior and senior high basketball tournaments with the help of Lee Rice and the cooperation of the city's two YMCAs, the Central, located downtown on Green Street, and the West Huntsville (now called McCormick YMCA).
Soon Fain was coaching football and a variety of other sports at Joe Bradley. It wasn't long until Rison (where Fain became principal in 1926) also began to add sports to its educational program. Lincoln and West Huntsville soon followed suit. And so by the late twenties, the four mill schools, along with Huntsville and Gurley, had football, basketball, baseball and track.
Before long, independent basketball and baseball became a hot item in the four mill villages, an outgrowth of the programs which began in the schools. Among the earlier pioneers in these mill sports were Hosee Watson, W. P. Fanning, Obie Johnson, Andy Boyd and Hub Myhand.
In the high schools, basketball was the first sport to win widespread popularity, although most of the games were played outdoors, even in freezing weather, until gymnasiums were built throughout the county in the mid-30s by the Works Progress Administration. From the 1920s until the great depression of the following decade, there were only a few Indoor courts, at Dallas, at Huntsville High and at the West Huntsville and Central YMCAs.
At Rison, Cecil Fain' s reputation as a principal-teacher-coach continued to spread. And his scope was coeducational, too. For two decades from the mid-20s until the mid-40s, his Rison girls basketball teams won 30 championships. Assisted by Ferrell Tabor, Fain also built a locally renowned girls softball dynasty by combining talent from Rison, Lincoln, New Hope, Gurley, Bradley and Huntsville. They went on to win several local, district and state championships (and one southern championship) under the names of Dr. Pepper and, later, the Huntsville Rockettes.
It should be noted that Cecil Fain, and others like him, men such as W. O. Woolley and O'Brellis Richardson, organized these pioneering sports programs without monetary compensation.
Fain coached for 50 years and never got a penny for it. There were no coaching supplements in those days. Only devotion to sport, and dedication to the physical development of young people.
'The old American volunteer spirit was what guided us in those days and led to today's fine athletic programs,' said Fain. 'I like to reflect on those years when we coached and the players played for the love of the game. We didn't have much equipment and we operated on a shoestring budget and there were no grants from boards of education and there was no state athletic association, but we loved it. Sometimes by mutual agreement, even we, the coaches, would play.
It makes me proud to see the sort of athletic programs we have in our schools today, and the sort of dedicated people who administer them. I'm sure the coaching is much better today, and the players are much better, than when we were starting out.
But I doubt whether they have any more fun now than we did.      Nor any more influence on the lives of others, he could have added.'" - Pruett

•  On the cover of this book is a photo of the crowd at Historic Huntsville Foundation's Trade Day Ceremony honoring Cecil Fain, 1991. - Photographic Memories 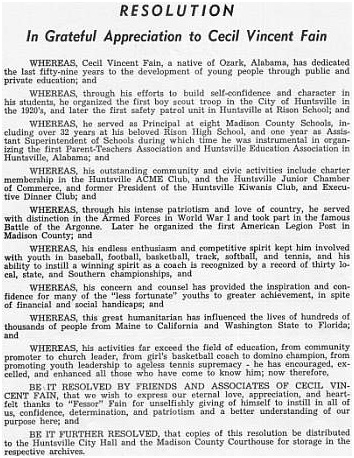 Tribute to Cecil Vincent Fain in the US House of Representatives Congressional Record (from rison-dallas.com: Principals)