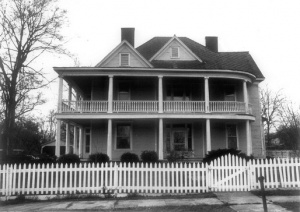 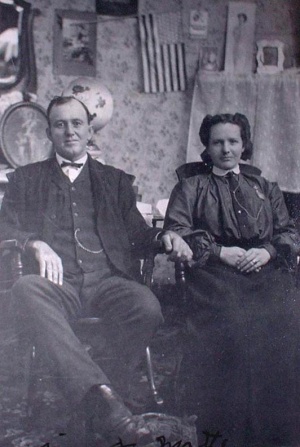 Jim Williams was born in February of 1867 and raised in Limestone County, in the Shoal Ford area, where Highway 72 crosses Limestone Creek just west of the county line. His parents (Joseph Dempsey Williams and Cornelia Jane Trotman) moved their family to Arkansas when Jim was in his early teens, but Jim came back to become a sharecropper just south of Madison in 1883, at the age of 16. He farmed the land of Dr. William Thomas Pride, located southeast of Madison’s historic district, until 1892 when he bought his own farm of 180 acres. He married Martha (“Mattie”) Susan Whitworth of Madison on December 24, 1889, and by 1913 they had acquired 1900 acres of their own. About 1903 they purchased the house of Dr. William Dunn, who had been the first railroad station agent in Madison. They had the house raised on logs, turned 90 degrees to face west, and moved north on the lot at 19 Front Street so that they could construct a two-story addition facing south. Their house has long been one of the most impressive of the old mansions in the historic district of Madison, and it incorporates the old Dunn house as probably the oldest surviving home in the district.

In addition to cotton farming and operating a sawmill, James Edward Williams opened a general mercantile store at the corner now identified as Wise Street at Main Street – a parking lot today. He raised a variety of livestock on his land and sold fresh meat and groceries, as well as dry goods in his store. He likewise had a livery business and sold farm implements. As perhaps his most farsighted move, he started the Madison Telephone Company in 1919, just 43 years after Alexander Graham Bell’s patent for the device was granted and long before most Southern towns had such a system.

Williams was civic-minded, hosting a town barbeque every 4th of July at Betts’ Spring, which was also called Williams’ Spring, now known as Lake Lady Ann or Sun Lake at the Edgewater development. He served as an alderman of the town, as well as being Mayor Pro-Tem in 1910. He was a trustee of the Madison Church of Christ and director of the First National Bank of Huntsville, which became First Alabama Bank and is now Regions Bank. Jim Williams died in July of 1943, at the age of 76 after traveling extensively in his “retirement” years, being driven around the country by his grandsons.