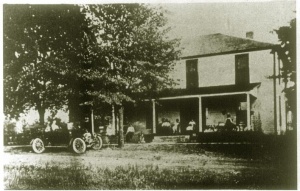 Photo of the Bronaugh Inn / Hafley Hotel / Smith Hotel of early Madison, from the 1913 Weekly Mercury newspaper of Huntsville, Alabama

The WEEKLY MERCURY newspaper of Huntsville in its December 17, 1913 special issue about the town of Madison profiled several of the leading citizens. Its article about James B. Bronaugh stated “The history of Mr. J. B. Bronough (sic) should be an inspiration for young men to follow his worthy example. He was born and raised in Madison County, and wouldn’t have been anywhere else. Went to work as a bachelor at the age of 18 for Gen. S. H. Moore of Huntsville. Though then young, he formed a determination to someday own the place upon which he was then working, and so he did, by finally having an opportunity to purchase it at an executor’s sale. He was raised on a farm and was overseer for 18 years. He now owns 80 or 90 fine mules and two very large farms, which produce annually a crop valued at about $40,000.00. Mr. Bronough buys cotton merely as an accommodation to his tenants and customers to see that they are protected as to prices. He is also an extensive dealer in farm implements of every description, aside from his modern mercantile establishment in which he carries goods and wares necessary for him to keep two efficient clerks all the time, and these are Messrs. Pryor Farley and W. E. Canterbury.”

“Mr. Bronaugh is just a beginner in fancy livestock and takes great pride in his fine young trotting horse, “Doctor Ike”, by The Clansman, for he has made a remarkable record this year, winning first at Monroe, Mich., and also at the following places: Jackson, Mich., Nashville, Tenn., Meridian, Miss. Out of twelve or fifteen starts he was not out of the money a single time. A liberal check has been received from the trainer, which was a source of delight to Mr. Bronough as a beginner.”

In “The History of Alabama, Volume 5” by Thomas McAdory Owen, it is stated that James Bruce Bronaugh married Sarah Ann Love, a daughter of Frank Love, in 1888. James was described as the father of Samuel Moore Bronaugh, an attorney in Birmingham. The parents of James were given as James E. and Mollie Douglas Bronaugh, but census and other records show that their names were James F. and Mary E. Douglass Bronaugh. James F. served as a census enumerator in the Cluttsville area for the 1880 census. His son Frank served as a census enumerator in 1900 in the Richland precinct of Limestone County. The father of James F. (and grandfather of James Bruce Bronaugh) was another James B. Bronaugh, who was born in Virginia in 1793. The 1850 census shows James F. at age 20 in the household of his father and his mother Nancy (Mary T. Humphrey according to some sources), born in Virginia in 1800. Next door was the household of Henry Moore. Either Henry or General S. H. Moore may have been the namesake of attorney Samuel Moore Bronaugh, son of the younger J. B. Two houses away was the family of Ferdinand L. Hammond of the Harvest area, who served as Probate Court Judge of Madison County.

James Bruce Bronaugh was one of three trustees of the early 1900s Madison Training School, which became Madison Elementary in later years. He also was owner of the Bronaugh House, an inn that was located on the vacant lot between the two houses on Main Street today. Originally the inn was known as the Hafley Hotel, then the Smith Hotel before Bronaugh ownership. J. B. Bronaugh bought several Madison town lots along Front and Arnett Streets from Jane Clay, later selling them to James E. Williams. According to data on Ancestry.com, the grandfather of James F. Bronaugh was a Samuel Bronaugh, whose father was Francis (married to Elizabeth Bruce), a son of another Samuel, whose father was Jeremiah Bronaugh. All of the names except Jeremiah were used in the generations of the prominent north Alabama Bronaugh families.