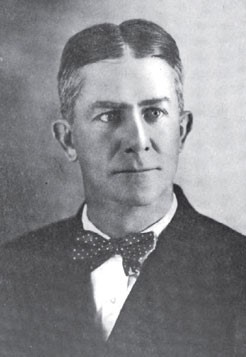 John Campbell Greenway was born in Huntsville, Alabama, to Dr. Gilbert C. Greenway Sr. and Alice White Greenway. Dr. Greenway ran a medical practice and raised his family on Adams Street near downtown. Dr. Greenway and his wife Alice are buried in Maple Hill Cemetery at the White/Greenway family property. [1]

As a boy, Greenway spent time on his grandfather Addison White’s farms and hunting camps in Jackson and Limestone counties hunting and being in the outdoors. He left Huntsville at an early age to attend Phillips Academy in Andover, MD.

Family: On both sides, Greenway was a direct descendant of a line of notable Americans dating to before, and during, the Revolutionary War including William Campbell, Isaac Shelby, Samuel McDowell, Ephraim McDowell, and Addison White. Addison White was the son of Col. James White the salt merchant and plantation owner. The community of Whitesburg south of Huntsville and Whitesburg Drive are named after James White.

Education: Greenway attended Phillips Academy, Andover, MD followed by the University of Virginia for his undergraduate degree before earning a PhB in 1895 from the Sheffield Scientific School of Yale University.[2] Greenway was a member of the Book and Snake secret society, President of his class, and a member of noted the Yale Football teams from 1892–1895 that went a combined 52–1–2 and were national champions four years in a row. Immediately following his graduation, Greenway joined the Carnegie Steel Company where he worked briefly before enlisting in the 1st United States Volunteer Cavalry of the US Army at the outset of the Spanish–American War. 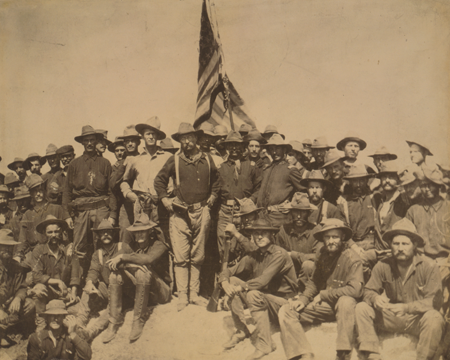 Colonel Roosevelt and his Rough Riders at the top of the hill which they captured, Battle of San Juan, by William Dinwiddie. 1898. Library of Congress Prints and Photographs Division, Washington, D.C.

Spanish-American War: Greenway volunteered for service in 1898 and joined Theodore Roosevelt's Rough Riders (Troop A – 1st Lt.) in the Spanish–American War. Originally commissioned a second lieutenant, he was then promoted to brevet then acting captain in the field by Colonel Roosevelt. Greenway earned a Silver Star for his courageous service at the Battle of San Juan Hill.[3]

Greenway is referenced on numerous occasions by Roosevelt in his book The Rough Riders and a book of Greenway's own correspondence was turned into a book entitled It Was the Grandest Sight I Ever Saw: Experiences of a Rough Rider As Recorded in the Letters of Lieutenant John Campbell Greenway

Business Life: After being removed from active duty at the end of the Spanish–American War in 1899, Greenway returned to steel and mining and held executive positions in a number of mine, steel, and railroad companies. He supervised development of United States Steel's open pit Canisteo Mine and Trout Lake Washing Plant in Coleraine, Minnesota, one of the first large-scale iron ore beneficiation plants in the world.[4] Following the successful commissioning of the Trout Lake plant, in 1911 Greenway was recruited by the Calumet and Arizona Mining Company (led by US Steel executives, the combined entity created by J.P. Morgan which included Carnegie Steel) to develop their newly acquired New Cornelia Mine in Ajo, Arizona. He developed the Ajo town site and developed the New Cornelia into the first large open pit copper mine in Arizona. Greenway also served for one year as a regent of the University of Arizona before the United States entered World War I.

World War I: Greenway was returned to active service as a lieutenant colonel at the dawn of America entering World War I. Originally based at Toul Sector, Greenway partook in the Battle of Cantigny, the first large-scale counterattack on German lines by the American Expeditionary Force (AEF) with the 1st Battalion of the 26th Infantry commanded by Major Theodore Roosevelt, Jr., the son of Greenway's commander during the Spanish–American War, Theodore Roosevelt. During the war, Greenway would fight in numerous battles including Battle of Saint-Mihiel and the Battle of Château-Thierry. Greenway was especially praised for his heroic conduct in battle and was cited for bravery at Cambrai. France awarded him the Croix de Guerre, the Legion of Honor, and the Ordre de l'Étoile Noire for commanding the 101st Infantry Regiment during the Meuse-Argonne Offensive. He also received a Distinguished Service Cross and the World War I Victory Medal. In 1919 Greenway was promoted to the rank of colonel of the infantry, and three years later he was promoted to brigadier general. Greenway's post-war military career included work with the Office of Naval Intelligence, the oldest branch of America's United States Intelligence Community.[5]

Honorifics: In 1930 Arizona placed Gutzon Borglum's statue of Greenway in the U.S. Capitol's National Statuary Hall Collection.[6] The statue remained there until being replaced in 2015 by one of Barry Goldwater; the Greenway statue was moved to the Polly Rosenbaum Archives and History Building near the Arizona State Capitol in Phoenix.[7] A statue of Greenway's great great grandfather, Dr. Ephraim McDowell, was placed in the National Statuary Hall in 1929 by Kentucky making them the only direct relatives to share the honor. Greenway Road in Phoenix, Arizona, Greenway High School in Phoenix, Greenway Public Schools in Coleraine, Minnesota, and Greenway Township, Itasca County, Minnesota are named in his honor.[8]

Funeral: John Greenway's funeral was held in Ajo, Arizona on Saturday, January 26, 1926. Five Pullman cars arrived. Over 3000 people were at the funeral, believable since nearly all of Ajo would have turned out. 17 of the 18 living Arizona Rough Riders were in attendance. Governor George Wylie Hunt and ex-governor Thomas E. Campbell were there. P. G. Beckett, Vice President and General Manager, Western Organization, Phelps Dodge Corporation" was also in attendance. The President of the University of Arizona (Cloyd Heck Marvin) and the President of Valley National Bank (C. E. Mills) were there too. The funeral directors called it the funeral of the century. Bi-planes flew overhead dropping flowers on the gravesite.