Hewlett School was named for a prominent neighborhood family who donated the land to Madison County. It was located approximately five miles from downtown Huntsville on the southwest corner of the intersection of Springfield Road and Pulaski Pike. Records indicate that Hewlett was a well established school by 1905. This crude one room structure, approximately 20 by 60 feet, faced the Pike with three windows on each side. A well worn limestone block was used as the entry step. Inside, four rows of desks were arranged to provide a passage way to the front of the room. The school bell was housed in a bell tower atop four posts several yards from the building. A water bucket sat on a shelf in the back of the school room, with the common dipper hung on the wall beside. There was no well on the school grounds and water was brought from a nearby farm. If and when the farm’s well went dry, water was carried from the creek. 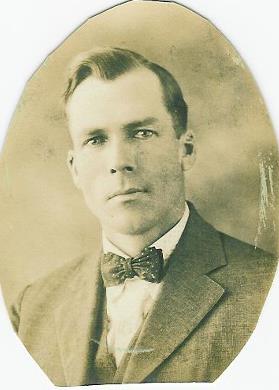 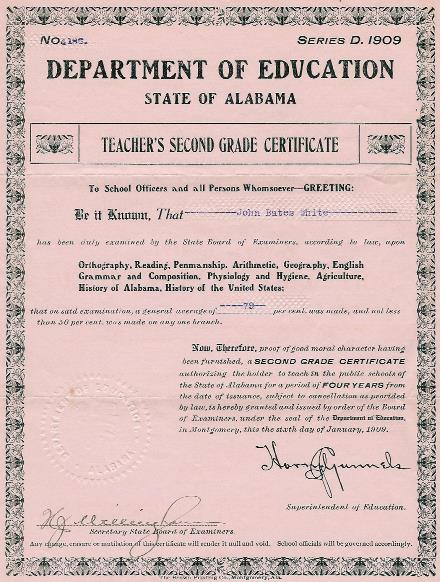 This is the teaching certificate awarded to John Bates White on 06 January 1909 by the State Department of Education, covering the following four years. Having been born 02 April 1891, he would have been 17 years of age and began teaching in the fall of 1909 he would have been 18 years old then.

The heating system was a pot-bellied coal stove which was started with cedar kindling gathered from the adjacent mountain. The trustees of the school kept a coal pile behind the building and also made repairs when needed. The trustees for many years were William Renegar, George McLaughlin, C. M. Davis and Charles Phelps.

The teachers of record included Mable Gillis, Luella Cawthon, Georgian Weatherly, Jessie Mertz, John White ( an eighteen year old) and Anna Carter. Unless they lived in Huntsville and came to school by horse and buggy, they boarded with a family of the patrons of the school. John White boarded with the George McLaughlin family, being the son of Mrs. McLaughlin’s mother’s sister.

The Hewlett School closed in 1919 at the time of consolidation. It along with White’s Cross Roads and Gladsone, were consolidated to form what became to be known as Pulaski Pike School. It was located on the west side of Pulaski Pike between Springfield and Winchester Roads. This is the teaching certificate awarded to John Bates White on 06 January 1909 by the State Department of Education, covering the following four years. Having been born 02 April 1891, he would have been 17 years of age and began teaching in the fall of 1909 he would have been 18 years old then.

The following are Reminiscences by two former students, Nell McLaughlin and Hazel Phelps.

Mrs. Nell McLaughlin Hinshaw, who started to school in 1905, “says weeds and grass were allowed to grow in the school yard. She remember an occasion when the grass caught fire and older students and neighbors used fine branches to beat out the fire. There was the added excitement when one girls long dress caught fire and had to be hastily extinguished.”

In cold weather the nearby creek froze over and children enjoyed ‘skating’ in shoes on the frozen surface. Mrs. Hinshaw “recalls one time when the ice was not firm and one of the girls fell in the icy water. She was stripped to her union suit and put behind the warm pot-belly stove to dry. These stoves were famous for being red-hot, smoky, or cold.”

Mrs. Hinshaw and Nona, her sister rode their pony, Ching, to school. The pony was hitched under a tree and waited patiently until school was out.

Hazel Phelps Jones does not remember anything about her first day of school, having turned six in July of 1906, she is even unsure if she started in 1906 or 07. “I do remember that I was outfitted with a pretty pencil box, a lunch box, and a collapsible drinking cup. That cup was the object of much heartache for me because Mama had said that I could not let anyone else drink from it. This cup made me appear ‘Stuck-up’ and fair game for one urchin who tormented me for all the years that his family lived in the neighborhood. He turned up his nose every time he could catch my eye and was as ugly as his mean little face could be. I was happy if the day were rainy for I knew that he would not come to school.” “There was also a female bully who kept the girls and most of the boys in subjection. Those of us who outlived her never could figure how she grew up to be such a good business woman, a Red Cross official, and generally a nice lady.”

“My first books included a reader, a speller, and an arithmetic text; a bit later a geography book was added. There also was a writing manual because good penmanship was prized. We bought our books at M. R. Murray, a bookstore on the south side of the courthouse square in Huntsville, just above the Big Spring.”

“At ‘big recess’ each school day, we took our lunch boxes to the shade of the trees to enjoy what Mama had packed that day, although I usually had consumed my dessert at ‘little recess’ at mid-morning. It could have been a piece of pie or some of Grandma Phelps’ cookies. After an hour of recess and lunch, the teacher would ring the bell and we made a flying rip to the two toilet buildings in the sassafras bushes at the rear of the schoolhouse. Then we headed back to our desks for the last half of the day.”

“At recess on some days, the girls rushed across the road into the big chestnut and pine grove where one girl would call out, ‘I’m Momma,’ and then direct her ‘children’ to rake pine straw into the dividers of her imaginary house. I think she got her example from home for she was the youngest of six children. Her papa seemed like an old man to me, but she always called him “Baby’, and he called her ‘Manny’.”

“Some days we played baseball, with the toughest folks being chosen first. Our girl bully was always the boys’ first selection. A few times I got to use a catcher’s mitt which somebody had brought to school. A boy might bring a real baseball, but usually we played with this creation—a small rock well wrapped with rags and sewn into the toe of an old sox by one of the mothers. It had a pretty good delivery. Our bat was a bed slat about two feet long with a hand hold cut out of one end. Only rarely would a boy bring a real bat, and he wouldn’t let just anyone use it.”

“We played another game we called, ‘Auntie Over.’ We divided into two groups—one on each side of the school building—and threw the ball over the school roof, then rushed to the other side to tag as many of the other team as we could. On rainy days we often would play jacks on the floor or ground if it was dry. Each of us had our little tobacco sack of smooth pebbles. We put them on the flat surface, threw one pebble as high into the air as we could, and tried to scoop up the others and catch the falling pebble before it landed. I was as good as anybody with jacks! Pop the Whip was another favorite sport; the tail-end man had to be rough and tough!”

“On Good Fridays we always had an Easter egg hunt in the grove. The big boys rushed ahead and found most of the eggs before we little folks covered much ground. The schoolhouse sometimes was used as a Sunday School. My papa, Charles Phelps, usually talked from the International Sunday School Lessons that we received in the mail. After I began taking piano lessons, I played the pump organ at these sessions. Sometimes, there was a comic play put on at the school, and Mama usually directed it. How those kids loved their parts! Most of the farm families came from afar to enjoy the productions.”

At ‘cotton chopping time’ school was closed for about six weeks and all the children headed for their parents cotton fields to thin the excess plants with hoes so the remaining plants could grow tall and wide. Usually about June the students returned to school for six weeks to complete the year. This was followed by a brief recess before the regular fall session began. The children would again return to the fields in the fall and early winter for approximately another six weeks to pick the cotton crop.

Hazel Phelps Jones remembers, “at the end of each school day in good weather, we gathered our book satchels and lunch boxes and started walking home, if the weather was bad, my Papa usually picked me up in the buggy. I had a mile and a half to walk, and one family lived a mile farther up the Pike. If we chanced to see a nursery wagon (probably from the Huntsville Wholes Nursery at Gladstone further up the Pike) headed our way, after delivering a load of young trees to the railroad station in town, we would tease the kindly driver to let us ride on the coupling pole. The front end of this long wooden pole, which was bolted to the underside of the wagon, was hitcher to a team of mules. The rear end of the pole extended beyond the tailgate three or four feet and made a good spot for a person to ride. As many of us as the coupling pole could seat scrambled on and held on tight. The driver would let us off at our mailboxes.”

The Following were Students at Hewlett School


As listed by Hazel Phelps Jones

The last three students seemed to be late entrants, as the dates were a few days later.