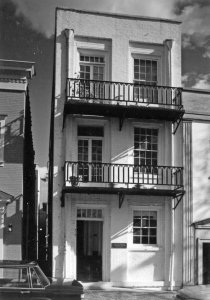 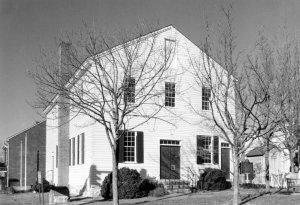 Constitution Hall, site of the 1819 Alabama Convention. On Franklin, but outside the District (Harvie Jones) 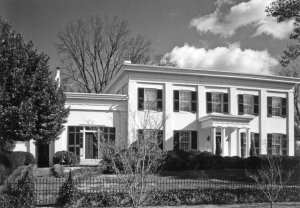 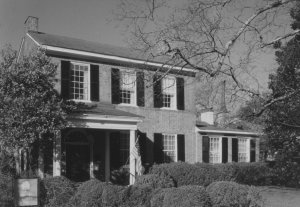 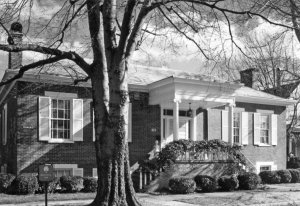 Franklin Street contains within the District over 45 commercial and residential buildings (including outbuildings) ranging in age from 1818 to c. 1980. At least six houses and several outbuildings date from before 1820. Four commercial buildings (301 through 307) date from before 1840, although 303-307 are disguised by a series of later facades, the latest, in a somewhat Italianate mode, dates from 1976 and gives form and order to a previous nondescript c. 1950 yellow-brick covering. No. 307 was in the 1850s the office of the prominent abolitionist lawyer James G. Birney. The interiors and exteriors of these early commercial buildings have been revised numerous times, but the hand-sawn and hewn framing, thick, wide heart-pine flooring, some mouldings, and other evidences bear witness to their early 19th century origins.

The most intact early commercial building on Franklin Street is the 1840s Mercury Building at 313, once the home of the Civil War era newspaper The Huntsville Mercury. This narrow three-story building retains much of its original trim, as can be viewed at the intact entry, and has two iron balconies whose cast-iron balustrades are of a somewhat Italianate arched design. Paired French windows open onto the narrow balconies. This important building is Huntsville's most intact early commercial structure, since even the fine 1836 Greek Revival bank on the Courthouse Square was gutted and remodeled (except for four front rooms) in the 1950s.

While not in the historic district, across the street from the Mercury Building is the site of the 1819 Constitutional Convention where the Alabama Territory became a state. This event is commemorated by the 1977-90 accurate reconstruction of fifteen buildings that occupied that half-block in 1819, including Alabama's first subscription library and the Walker Allen Cabinet Shop which accommodated the convention proceedings. Archaeological work on this site (a parking lot in 1970) produced many 1819 era artifacts including antique metal printer's type at the site of the Boardman Building which housed the printing press that printed the first constitution of the new state of Alabama. This museum complex, Alabama Constitution Village, also illustrates life of the 1819 period as well as the statehood convention.

The newest building on Franklin Street is an office at 333, built about 1980 in a modern but harmonious fashion. An even more frankly modern but harmonious office building (c. 1967) is at 401. It has a series of small balconies and arched brick openings that make it compatible with its historic neighbors without using literal historic motifs.

Federal Period buildings on Franklin Street (c. 1818-1835) in whole or in part, are 301, 303, 305, 307, 405, 515, 516, 517, 524, 527, 558, 600, 614 and 621, plus about seven outbuildings, or about 20 buildings altogether. Several of these are disguised by later additions or modifications. The most interesting of these disguises is the 1819 Mastin house at 516 which has an 1850s doubling built directly across the front of the 1819 house. Upon entering the front door of the 1850s portion, the Federal Period center hall and stair are seen completely intact at the end of the 1850s hall. The 1819 service building remains to the northwest of the original house. While the main house is clapboarded, the kitchen-service building is brick, which might seem a paradox until it is realized that the brick construction is more fire-resistant. The kitchen building was originally detached from the house for the same fire-safety reason. The Mastin house has a second "winter kitchen in the basement, one of at least two known to be in the District. Kitchens are discussed in more detail in the chapter on Architecture.

Perhaps the finest Greek Revival residential portico in the Twickenham District is at 517, the c. 1820 Dr. Fearn house (Federal Period) which was enlarged and remodeled to the {http://en.wikipedia.org/wiki/Greek_Revival_architecture Greek Revival style] by the architect-builder George Steele in 1849. (A detailed contract-description exists.) The portico is diminutive, perhaps 8x14 feet, but is beautifully proportioned and detailed. Steele also added the tall brick pilasters and roof entablature across the front to update the 1819 Federal Period house to a more imposing Greek Revival appearance. The two south bays and the north Doctor's office were part of the 1849 enlargement. Before 1935 the main roof entablature had been stripped bare of its pilaster capitals, taenia mould, mutules, and guttae ornamentations. To see these missing important elements, look at the one-story office wing where they remain in 1997.

The Italian Villa style is represented by the General Morgan house at 558, and this is another Federal Period house greatly enlarged and updated in the 1850s. The modifications were well done. Details of the c. 1819 house are present inside, but the exterior appears to be completely of the 1850s Italian Villa style.

Seven original or early outbuildings of the 1818-1819 period remain at 516, 517, 527, 600, the largest collection of any of the District streets. These are of great importance since they are very rare and give a more complete picture of life in the early 19th century.

Franklin Street has two excellent examples of the Craftsman Style of the 1900-1920 period. These are 531 and 608. Both have deliberately canted roof-ridges at the gables to be reminiscent of a thatched roof No. 531 has wide aluminum siding applied before the establishment of the District.

An ambitious and skillfully-done early 20th century Colonial Revival house is No. 615. A Dutch Colonial (gambrel roof) house is No. 603. No 604 is an attractive Tudor Style house, with deliberately rough "clinker-bricks" and rustic untrimmed boards at its gables.

Franklin Street contains a wide variety of building dates and styles and has more early buildings than any of the other District streets. 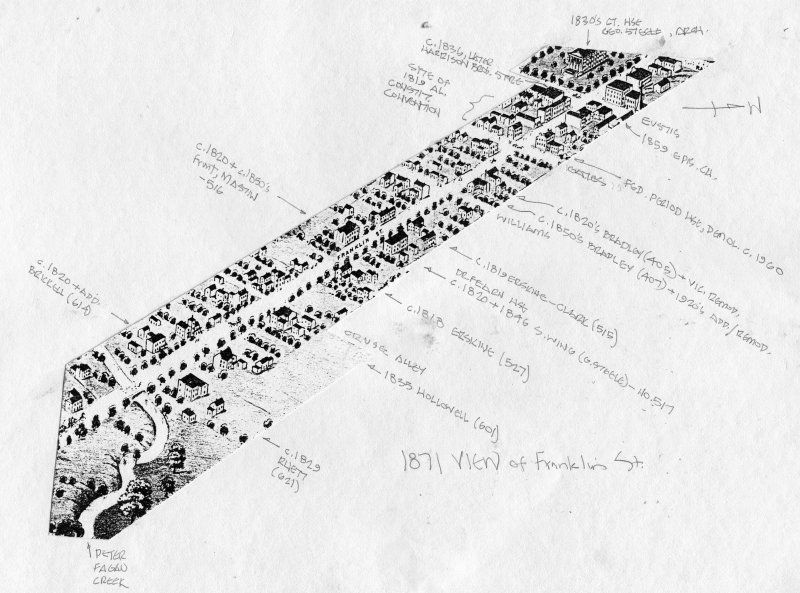