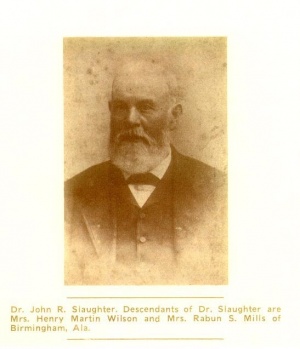 ]Photo of Dr. Slaughter from files of the Madison Station Historical Society. 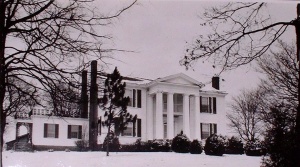 Dr. John Slaughter, namesake of Slaughter Road, married Mary Lanford and had a daughter Charlotte (“Lottie”) who married James H. Cain, a Madison merchant. Dr. Slaughter’s wife lived was raised in the mansion of her father, William Lanford, who was a son of Madison County pioneer Robert Lanford. Robert and Bartholomew Jordan (a Revolutionary War patriot) were charter members of one of the earliest Methodist churches in north Alabama, known as Jordan’s Chapel, located near the Botanical Gardens on Bob Wallace Avenue. Robert had come to the area with LeRoy Pope, the “Father of Huntsville”. Robert’s son William married Bartholomew Jordan’s granddaughter Charlotte Fennell, daughter of Isham J. Fennell and his wife Temperance Jordan. The Fennell monument is one of the largest in Huntsville’s Maple Hill Cemetery.

Dr. Slaughter was a physician in Huntsville when he married Mary Lanford, but when her father William developed stomach trouble in his latter years, he moved his practice to the Lanford mansion on the east side of Indian Creek, immediately north of the “S-curves” of Old Madison Pike. The mansion today is almost entirely hidden from view by trees, but it is still one of the most impressive in the region, having been the social center of the area, with many elaborate dance parties held there in the 1850s and 1860s. After William Lanford’s death in 1881, his plantation was divided between Mary and her sister Martha (Landford’s son Robert had been killed in the Battle of Shiloh), with Mary inheriting the house and the southern portion of the estate. Dr. Slaughter built a small brick office building for his practice in front of the mansion, using the mansion’s basement as a laboratory. However, after his death and Mary’s passing in 1913 the house was sold out of the family. Eventually, Dr. Slaughter’s office was used as a hatchery for chickens, but today it is gone.

Dr. Slaughter’s daughter Lottie married James H. Cain in 1896 and moved to Madison. She had her new house built at the corner of Arnett Street and Buttermilk Alley, which at that time was called Hobson Street. Today Jeanne and Stan Steadman live in the large dwelling. Jim Cain was a brother of Robert Parham Cain, who married Lena Martin, a daughter of Elijah Thomas Martin, who was a brother of George Washington Martin. Robert Parham Cain operated a store at 110 Main Street (Whitworth Realty today), believed to be the oldest store in Madison. This building was constructed for merchant G. W. Martin, who purchased the site on February 13, 1857, as the first known sale of a lot in the town planned by James Clemens. A son of Robert Parham Cain, Robert Earl Cain, continued to operate a store there, but tragedy struck in the 1920s. In April of 1928 his wife Annie Nance Cain was struck and killed by a train as she crossed the tracks in Madison. In February of 1929, Robert Earl Cain Junior drowned in a cistern behind the store, and his father moved away from town to Lawrence County, where he became an automobile salesman. He left his only surviving child, a daughter, in the care of his mother and visited her in Madison frequently until his own passing. More details of the family stories can be seen in the book “Madison Memories: A Connected Community, 1857 – 2007”.