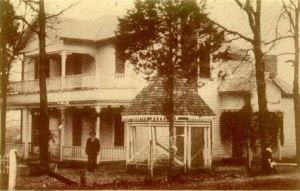 The Old Hertzler Home was located on Church Street. The house was occupied by Dr. John Hertzler and family. Dr. Hertzler came to Madison from Pennsylvania after the Civil War. 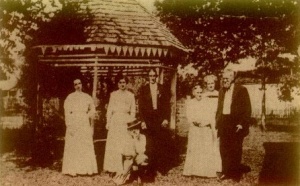 John Hertzler was born in1828, West Hempfield township, Lancaster County, Pennsylvania. He and Anna Garber were married in Pennsylvania in 1851. Sometime between 1853 and 1856 they moved to Clark County, Ohio, where the last six of their seven children were born. The 1860 census showed John's occupation as “Car. (Carpenter?) on Saw Mill”. The Hertzler family book says that he was a Captain in the Union army during the Civil War. It further adds that after the war, his father, Jacob, provided $60,000 to John for him to go to the South in order to do “missionary type work, helping the people who had suffered such a loss during the war.”

It is unknown whether helping the people of the South was truly John Hertzler's intent in moving his family from Ohio to Madison County, Alabama, around 1869. However, that is what he accomplished. He settled the family initially on land about five miles from the village of Madison, on land that is now part of Redstone Arsenal. There he built a farm house and barn that became models of innovation in the area. He had another impressive “town” house built in Madison, in the southwestern corner of the junction of Church Street with College Street. Hertzler incorporated the use of elevated metal tanks to catch rainwater from gutters, allowing for gravity-fed running water distribution in the houses, more convenient than hand pumping or drawing water buckets from the commonly-used cisterns in the ground. His barn on the farm was noted for incorporation of loading ramps that allowed hay to simply be rolled down into the loft rather than needing a hoist to lift it to the top of a stack from the ground level. Some of his techniques were described in newspapers of the day and in such forums as the booklet “Huntsville and Madison County, Alabama” published in 1908 by The Business Men's League of Huntsville.

Additionally, somewhere along the line, John Hertzler became a medical doctor. He was listed as a physician in “Polk's Medical Register and Directory of North America” in 1902 and 1904. His death certificate and the newspaper obituaries at the time of his passing noted that he was a physician, as did the transactions of the Medical Association of Alabama in 1900. There he was shown as having received his training and education in homeopathic medicine at the University of Nashville. Still, John Jr. died of tuberculosis at the age of 49 in 1913, since his father's medicines of the day could not cure it. The Hertzler family book includes recollections of a Black man who told of being treated by “old Doc Hertzler”. In those days, often the doctor was paid in “trade” by bringing a chicken or eggs that could be spared when no money was available. Dr. Hertzler's grandson, Harvey Gordon Anderson, as a child is mentioned in the family book as having often complained to his grandfather that he didn't feel well, so that he would be given a bottle of sugar pills.

The Hertzler book further mentioned that Dr. John wrote articles for the Weekly Mercury, a Huntsville newspaper of the time. Unfortunately, no by-lines providing credits were used in the newspapers then. However, the family book went on to mention that Dr. Hertzler became known as the “Sage of Mullens Flat” because of those articles. That lends credibility to the family tradition, since Mullens Flat was an area of today's Redstone Arsenal near where Hertzler lived on his farm property. He may well have been writing to provide helpful and healthful information to farmers of the area. Therefore, it can indeed be assumed that Dr. Hertzler helped the people of the South to recover in many ways from the devastation of the Civil War.