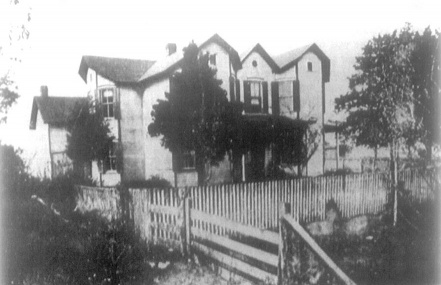 Farm Residence of John Hertzler, formerly of Ohio. From The People Who Lived on the Land that is Now Redstone Arsenal, By Beverly S. Curry, 2006, page 70. Original source: Business Men's League of Huntsville Alabama, 1908.

In the late 1800s people could visit distant relatives by train with an ease and frequency that had previously been impossible. The railroads brought the country together. An example is seen in the 1877 diary of Henry B. Reist of Lancaster County, Pennsylvania, when a party of six visited their Hertzler relatives in Madison, as excerpted with minimum paraphrasing in the following paragraphs. Departing Lancaster County on October 17, Henry and his wife, accompanied by John Nissley and wife plus Henry Snavely and wife, traveled from Pennsylvania for visits in Ohio, Missouri, Kansas, Indiana, Tennessee, Alabama, Virginia, and Washington, D.C. The description of their visit here is described in the Reist diary as follows:

November 5, Sunday afternoon, Decatur, Alabama: Had to lay over here for the morning train to Madison. Arrived in Madison (November 6) and got a man with a team to take us to Hertzlers (arsenal land location), where we arrived about 11 a. m. It rained all morning, but nearly quit as we drove out. We found them all well and at home engaged in ginning cotton. Letters from home were awaiting us at this place.

November 7: This evening we were down to the creek (Indian Creek, where it runs through the arsenal) to see the beaver dam. It was about two miles, one mile through dense forest. It was after 3 o'clock when we started. We stopped on the way to shoot at a flock of pigeons, without getting any. We found the dam about three feet high, made of leaves with logs and sticks. The dam was at least 125 feet long. The beavers cut down trees up to 12 inches in diameter and float them down the stream to the dam. The kind of timber at the Hertzlers includes sour wood, dogwood, water oak, white oak, post oak, span oak, red oak, walnut, sweet gum, Cupalo (Tupelo) gum, black gum, red elm, white elm, shell-bark hickory, white and red chestnut, sassafras, ash, birch, sycamore, beech, persimmon, and paw-paw.

November 9: We are still here enjoying the hospitality of the Hertzlers in the true Southern Planter's style. Passing our time rambling over the farm, through the woods and swamp. They have very fine timber, with trees four and five feet in diameter. I never met with such fine splitting wood. Yesterday we went after ducks and got a rabbit and four quail in the afternoon. Frank Hertzler shot a wild goose.

Saturday, November 10: Today we have been to Huntsville in company with Mr. Hertzler, distance ten miles. On our way in, we called at the homes of McCullough, Wells, and Zell. We then went to the McGee house and got dinner (“lunch” today). Then went to see the big spring, which is right in town under the houses. It is as large as Big Chicques Creek. We then went to the post office and got letters from home dated November 3. We then went to Mr. McCommough's office, which is in the Calhoun House, a private residence rented by the United States as a U. S. Marshall's office and district courthouse for northern Alabama. The frescoeing of the building was done by an artist brought from Paris. We then started for home, where we arrived safely at 8:30 p.m.

Sunday morning, November 11: This morning at John Hertzler's house we had quite a sharp frost, the thermometer standing at 32 degrees. This is the finest sunny morning yet since we came to Alabama.

Sunday evening: Today we were at Mr. Lanier's. They are “dyed in the wool” secessionists, as they called them. He had before the war over 100 slaves and 3,000 acres. At present he has about 1,700 acres. We took dinner with them, which consisted of soup first, then cabbage and bacon, cornbread, roast turkey, potatoes, and yams. For desert we had sweet potatoes or grange pudding with milk to drink. These Southern men seem friendly; I would not be afraid to live among them.

The visitors left on the 9 a.m. Monday morning train from Madison for Washington, D. C., no doubt with a new perspective on the ambiance of life in the South.