Did You Know? Brahan Spring

Reprinted from the Merrimack Mill Village Newsletter – July/August, 2010
Did You Know? articles provided by Jim Marek. 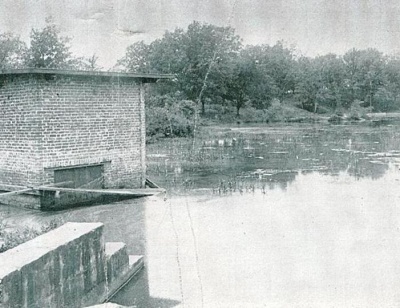 The brick building to the left in this picture was built above the dam at Brahan Spring in 1903/1904 over the end of the brick flume that carried water from the Spring to a reservoir beside the Merrimack No. 2 Mill. The concrete footings for this building can still be seen in the northern most portion of the lake.

Did you know that Brahan Spring, also known in the early days as Brahan Lake, was a source of water for the Merrimack cotton mills? One of the major projects in the construction of the Merrimack No. 2 Mill in 1903/1904 was the digging of a flume for piping water the approximate 1¾ miles from Brahan Spring to the new mill site on Triana Pike (Triana Boulevard).

All work on the flume was done by hand with the digging going down by as much as 35 feet in spots. Because of the depth, platforms had to be built along the way so that the excavated dirt could be thrown up from the bottom of the excavation to the platform and then, if required, to a still higher platform before it could be thrown from the trench. Designed to be gravity fed, large amounts of dynamite were required to clear away layers of granite in certain areas to achieve the necessary depth to insure the proper flow of water. Once completed, a brick water main measuring four feet in diameter was constructed the entire length of the flume with manholes at intervals. At the Mill end of the flume, a reservoir was hand dug, braced with timbers, and heavily lined to contain the water. Five pumps were then installed to pump the water into the Mill.

What became of the water main? Of course the brick building pictured below is gone and the associated intake at Brahan Spring has most likely been sealed. But, according to the City’s Water Department, the old water main just may remain – somewhere under the soccer fields.