Reprinted from the Merrimack Mill Village Newsletter – January/February, 2011.
Did You Know? articles provided by Jim Marek. 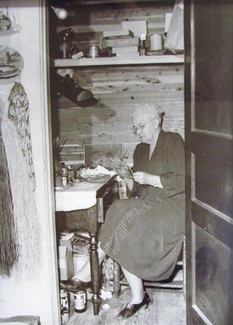 When the names of our streets in Merrimack Mill Village were changed from the original alphabet designations, “C” street was named Clopton Street in honor of Anne Bradshaw Clopton.

The oldest of six children, Anne Bradshaw was born July 22, 1878 in Shelbyville, Tennessee. The Bradshaw family moved to Huntsville where Anne’s father, Professor R.S. Bradshaw, became president of the old Huntsville Female Seminary. Here Anne met and married James Blount Clopton on February 12, 1906. Anne Clopton is best known locally as a beloved teacher at Joe Bradley School where she taught Latin, Art, and Math from 1921 until her retirement in 1943. In fact, her teaching career in the Huntsville school system began long before that in 1894 at the age of 16. She is recognized to have formed the first Girl Scout troop in Alabama. Truly a pioneering woman in both spirit and life, Anne took her scouts on yearly camping trips, the first organized camping for girls in the State of Alabama. She was an avid reader and one of the founding members of Huntsville’s “Charter Club”, a group of women who would meet to discuss book reviews and current topics of the day. As though this were not enough, in addition, Anne was a talented artist. At an early age, she learned of a German artist that painted on spider webs. This interested her and she soon perfected her own technique, carefully collecting webs for a canvas and delicately applying tiny dots of oil paint letting them dry completely before continuing. As a result, her unique paintings took weeks to finish. Her work gained international recognition with exhibits at the New York World’s Fair and Ripley’s Believe It Or Not Museum in St. Petersburg, Florida. Two of her paintings are on permanent display in the Washington D.C. at the Smithsonian. She even appeared on several television programs in the early 1950’s. Upon her death on February 4, 1956, she willed her large painting collection to the Burritt on the Mountain Museum where the originals are still exhibited today. 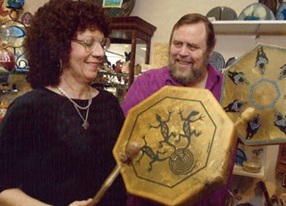 Anne Clopton lived with her husband and five children (two sons and three daughters) in a one-story house south of the Village on what today is Triana Boulevard. The house still stands at 4004 Triana Boulevard. Anne’s art studio consisted of a cedar lined closet in the house. Ron & Jerrine Gray bought the house in 2007 and opened The Dream Maker, a gift shop dedicated to “Creating Health and Harmony through Nature”. Like many of us in the Village, they were soon captivated by the history of the area and the remarkable talent of Anne Bradshaw Clopton and established The Anne Bradshaw Clopton Exhibit. Ron and Jerrine welcome visitors to come by to see a recreation of Anne’s closet art studio, images of her paintings, photos of Anne, and historical footage acquired from the Smithsonian Institute of Anne with her artwork featured in the Industry on Parade film series. The Dream Maker is open Tuesday through Saturday from 10:30 a.m. to 5:30 p.m. For more information on The Dream Maker and The Anne Bradshaw Clopton Exhibit visit [1].