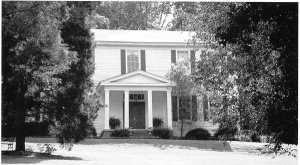 Near the crest of the hill at 104 Metaire Lane, on the north side of Eastview Drive, sits a large house with an Alabama Historical Commission marker in the front yard. A photo of the house, along with a synopsis of its history, is on page 73 of Madison’s sesquicentennial book “Memories of Madison: A Connected Community”. The story of the house goes back to the early days of settlement of Madison County. Today the house is home to Ann Marie Lacy, Madison’s City Attorney. It was not built at its present location.

James Cooper constructed the house a mile north of the Tennessee River in the southern part of today’s Redstone Arsenal. He began a two-story house with brick brought down the river from Chattanooga for his bride, Charity Allison. They married in 1832 when she was about 30 and he was about 40. Charity was born in Ireland and came with her parents William and Isabella Allison to Madison County in 1817. That was about the same time that James arrived and began buying land for a plantation that eventually totaled about 640 acres.

According to an article written by Pat Jones in the Huntsville Times (March 5, 1933), James committed suicide just two years after his marriage to Charity. The reason for his action is unknown, but the method was highly unusual. He walked with a large iron pot the mile from his home to the river on a cold December 7 in 1834. He fastened the pot to his head and jumped into the river to drown.

James left the plantation to Charity, and she married neighbor Houston Lea 6 years later. Before the marriage Charity recorded an agreement that banned Houston from inheriting her property. Yet, it was Houston who expanded the house to become an impressive mansion by adding to the brick structure built by Cooper. The pre-nup was unnecessary. Charity outlived Houston, who was 5 years younger but left her with combined lands of over 2000 acres when he died in 1853. Charity herself died in 1872, after falling on hard times, losing her plantation in a sheriff’s sale for debts in the 1860s.

Charity Cooper was in the 1839 list of William Allison’s heirs. Charity’s brother John was executor of William’s will. Her brother David had a daughter named Isabella (after his mother). Isabella married the Reverend Alexander Penland, now buried at Ebenezer Presbyterian Church on Hobbs Island Road, where Charity had her first husband interred following initial burial in the plantation’s Cooper-Penland Cemetery. Charity’s sister Mary Jane Allison married Edward Parker, while her sister Catharine Ann Allison married U. S. Congressman Williamson R. W. Cobb. Charity’s sister Martha married Dr. James W. Fennell. Another sister, Isabella, married James’ brother Francis Fennell. The Fennell brothers bought Charity’s plantation at the sheriff’s sale, but the land was sold to several different owners thereafter, with Joseph B. Harris buying some of the land and the house by 1920. The house was known as the Harris House when the army obtained the property.

It should be noted that not only the house connects to Madison, but the Fennell brothers were closely related to Isham Fennell, whose daughter Charlotte married William Lanford and lived in the Landford-Slaughter mansion. Her granddaughter “Lottie” married Jim Cain in Madison. Early censuses show that Charity’s neighbors included William Lehman (father-in-law of George Martin, first lot owner and storekeeper of Madison), along with Clement Lanier and Alexander Gray Wall. Clement was closely related to the Laniers of Madison, and Alexander was the progenitor of the family for which Wall Highway is named. In fact, Alexander Wall married Mary Cooper, sister of James, the first husband of Charity. Even the Darwins were connected via arsenal Lanier ancestry and the fact that Tyler lived on the pre-arsenal lands of Thomas Jamar and Thomas Owen, who were enumerated next door to Thomas Beadle, who lived adjacent to Houston and Charity Lea in the 1850 census. Obviously, the old Cooper-Lea-Harris House had many owners and visitors with a number of connections to early Madison.