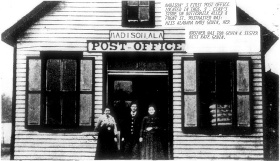 If you visit the old section of the Madison City Cemetery on the south side of Mill Road, you might notice the white tombstone for Christopher C. Gewin. The original was broken into several pieces over the years, and it was repaired in 2004 by Ron Johnson, Charles Nola, Stan Steadman, and Tom McKee as volunteers for the Madison Station Historical Preservation Society. The man memorialized by the stone was one of three people bearing that name who lived in Madison at the same time.

The oldest of the three was born around 1810 in North Carolina, according to the 1880 census. He had a son of the same name who was listed as age 11 in 1880. The senior Christopher was listed with occupations as a confectioner and fruit vendor, but he also served as Mayor of Madison and as a Justice of the Peace. In this last capacity, he presided at the arraignment of two men arrested for robbing and murdering elderly grocer Nathan Freeman in Madison just before Christmas in 1884. The children of the senior Gewin included Alabama Pocohontas Gewin, who in 1875 married Seymour Doolittle, a Madison blacksmith who lived at the corner of Main Street with Sullivan Street. Her photo, along with her brother Tom and her sister Kate, can be seen in various places around the town as they posed in front of an early post office of Madison, when she was postmistress.

The subject of the tombstone was born in Chickasaw County, Mississippi in November of 1845. The stone records his death as occurring in February of 1878, so he did not live to reach his 33rd birthday. He is believed to have been a nephew of the senior Christopher C. Gewin of Madison. The father of the tombstone subject was Thomas Gewin, a farmer listed as age 41 in the 1850 census of Chickasaw County, Mississippi. That listing included Thomas’ wife Martha Pickens Gewin, at age 32, along with 7 children. The four oldest children were shown as being born in Alabama, while the three youngest (including Christopher) were shown as born in Mississippi. An older brother to Christopher, Thomas P. Gewin, was listed as the postmaster at age 26 in Okolona of Chickasaw County in 1860 after their father Thomas had died in 1854.

The Madison Gewin family history is posted on Ancestry.com as being traced back to early Colonial days in America and to the 1600s in Ireland. Some of the notable family members and connections are stated to include Robert de Ferrers (aka “Robin Hood”), Daniel Boone of early American fame, John C. Calhoun (Vice President of the USA 1824 – 1832), Dwight D. Eisenhower (President of the U.S. 1953 – 1961), and Richard M. Nixon (President of the U.S. 1969 – 1974). However, most of the generations are tracked back through Christopher’s mother Martha Pickens, who was a daughter of Israel Pickens of the Mt. Hope community in Lawrence County, Alabama. What is especially intriguing is that as the lines are traced through Tennessee and the Carolinas and Virginia (with some roots in Lancaster County, Pennsylvania), there were a number of marriages that brought into the gene pool many other surnames that were later closely associated with Madison area history. These earlier marriages back east connected the Pickens line with the Gillespie, Pike, Martin, Williams, and Clemens lines. While the precise connection of a relationship to James Clemens, the Founder of Madison, is not yet proven, it is an item for conjecture about the “small world” that our pioneers lived in.