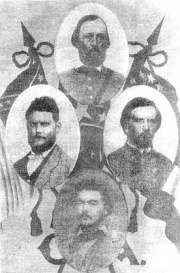 One of the more successful Southern recoveries following the Civil War was experienced by John Buchanan Floyd, a Confederate Captain. He was the youngest of four brothers, sons of Dr. Nathaniel Wilson Floyd of Lynchburg, Virginia, who fought for the Confederacy. The family history was documented in Southern Biographies and Genealogies, 1500s - 1940s. John Floyd attended Virginia Military Institute, where he studied under Professor T. J. Jackson -- later known as "Stonewall Jackson". John was on a visit to his next oldest brother, Nicholas Jackson Floyd of Shoal Ford, near Madison in Limestone County when the war started. Nicholas immediately left for duty in the Confederate forces after obtaining John's promise to remain in Alabama and manage the cotton plantation. However, after the Battle of Manassas and Lincoln's call for more troops, John could resist no longer. He put the affairs of the plantation in the hands of its black foreman and joined a newly organized Confederate company, where he was elected to a lieutenancy. The company became a part of the 35th Alabama Infantry and distinguished itself at Corinth, Mississippi, where its major was killed. John was given a battlefield promotion to replace the major, but the War Department of the Confederacy declined to move him above those in the normal progression. Instead, a captain was put in the position, and John was transferred to General Joe Wheeler's cavalry.

When Wheeler's force was sent to defend Atlanta, during a Southern attack at "Big Shanty", John Floyd was shot from his horse during the last charge against a greatly superior Union force. He received a Minie ball through an ankle, but men of his company rallied around him during intense fire and got him on his horse again. He refused to permit the surgeons to amputate his foot, and he suffered as a cripple for the rest of his life from the injury. His brother Nicholas Floyd was passing through on other orders and found John in distress, so he changed his travel plans to take John back to the family home in Virginia for the duration of the war.

John B. Floyd’s photo in the composite arrangement with his brothers was made after the war, when he had acquired civilian clothing of proper size. He was over six feet tall, as were all of the brothers except Nicholas, who was just reported as “barely six feet in his boots”. The photo of Nicholas was made as he passed through Lynchburg, Virginia, where his father lived. The occasion was just after the Battle of the Crater at Petersburg, Virginia, in 1864, and Nicholas was enroute to the Trans Mississippi District. Nicholas was owner and editor of the Athens, Alabama, newspaper “The Herald”. The photo of Nathaniel Bedford Floyd is believed to have been taken in Matamoras, Mexico, while he was an officer of the general staff. He served as an ordnance officer in the 6th Texas during the Civil War. Charles Anderson Floyd fought in the Virginia Cavalry. His photo was made in camp a short time before he was killed in the repulse of Grant’s attack on the right flank of the small remnant of the Army of Northern Virginia (under General Robert E. Lee), only three days before the surrender at Appomattox Courthouse in 1865.

After the war, John decided to revisit his brother's Limestone County plantation, and there he received a different "wound" from which he never recovered. He encountered a second cousin who was now a woman, not the schoolgirl that he had seen before the war, and her blue-gray eyes inflicted this new wound from what started as harmless glances. The distant-in-bloodline cousin was Frances Maria Harris, but she was apparently not distant toward John in other ways. John and Frances were both descended from Orlando Jones via one of his two granddaughters. The older of the two grandchildren was Martha Dandridge, who first married Colonel Custis and next married George Washington, first President of the United States. Martha Dandridge Custis Washington was also a great-grandmother of General Robert E. Lee's children. The younger of the granddaughters of Orlando Jones was Frances Barbour Jones, who married the unrelated Captain John Jones. Captain Jones served as an officer in the Light Brigade of Harry Lee, the father of Robert E. Lee. It was Frances Jones who became the great-grandmother of both John Floyd and Frances Maria Harris, who were wed in December of 1867.

John and Frances produced nine children that lived to adulthood. The eldest, Elizabeth Harris Floyd, married Eldred Fletcher of Madison, son of Dr. Richard Matthew Fletcher. The second, Annie West Floyd, married William Harvey Gillespie, son of Campbell Milton Gillespie and his wife Lorinda Clark. The third was Schuyler Harris Floyd, who married Mittie Sherrod. The fourth child of John and Frances was Ellen Stith Floyd, who married John Hertzler, son of Dr. John Hertzler, who in 1877 bought land east of Zierdt Road and north of Martin Road that is today part of the arsenal. The Hertzler family, however, resided on Madison's Front Street for a time, before building a large house at the corner of Church Street with College Street. That house is no longer standing.

James Arthur Wise was brother and business partner of George Washington Wise, the prominent Madison merchant and President of the Bank of Madison, as well as partner in the Burton & Wise Drug Store and the firm of Wise Brothers & Harper. The latter firm was so-named due to the inclusion of partner B. F. Harper, who served as Mayor of Madison, 1900-1901. George Wise was also trustee of the Madison Male & Female Academy, as well as partner in the firm Wise, Hertzler & Co., which was dissolved and replaced in 1887 by the partnership of the Wise Brothers. James Wise's wife Lucy was a daughter of Thomas Harris, the first person buried in the Madison City Cemetery, according to death-date inscriptions on tombstones. Thomas died at age 30 in 1869 from wounds received at the Battle of Manassas.

The last three children of John Floyd and Frances Maria were Florence Lee Floyd, Charles Perkins Floyd, and Nicholas Nathaniel Floyd. They were unmarried at the time of the writing of the family document referenced earlier. John Buchanan Floyd, Sr., in spite of his crippled ankle, became Mayor of Madison for several terms, 1896, and 1898-1900. While serving in that capacity, he bargained with the city to build in 1896 the structure that became known as the Roundhouse, even though it was octagonal in shape. It is thought to have been given the name from railroad stations generally built at the termination of a line, where the train turned around, thereby becoming turn-around or "round" houses, no matter what their shape. The Madison Roundhouse was built on 8-foot stilts over the town's water supply (a well or cistern), so Mayor Floyd had to ascend stairs on his painfully injured ankle every day that he went to his office in the Roundhouse, which served as City Hall, Mayor's Office, and Barber Shop until the 1930s.