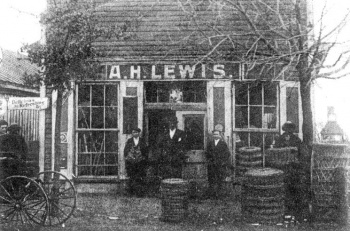 A.H. Lewis in center of photo, standing in doorway

Arthur Holding Lewis was born October 15, 1848, in Triana, according to the Lewis family Bible. His middle name (sometimes given as "Holden") was probably chosen in honor of the neighboring plantation owner, Richard Holding, whose large monument is in the old section of the Madison City Cemetery after being moved from the airport during construction in 1984. A. H. Lewis operated a general merchandise store at 104 Main Street, the present corner with Wise Street. That site later had the much larger store of Jim Williams, but it burned in 1942 and is now a parking lot across from Main Street Cafe. Arthur H. Lewis was a City Councilman from 1898 to 1901. In a 1913 special edition of the Weekly Mercury newspaper about the town of Madison, Arthur Lewis was described as “… among the most cheerful and entertaining gentlemen in all of Madison County”. He was stated to be "...a Methodist Church Steward for over 30 years". He was an officer of the Order of United American Mechanics, a patriotic society with objectives of supporting public education, assuring Bible readings in the schools, and limiting immigration to protect American jobs.

Arthur Lewis married Martha (“Mattie”) Cartwright in Limestone County in 1873. She was the ninth child of Hezekiah Bradley Cartwright. Her mother was Martha Vaughan, whose first husband was Elijah Bailey. Hezekiah Cartwright was a son of John Cartwright, an early settler of the Madison area. Martha Vaughan Bailey Cartwright is buried in the Madison City Cemetery beside another of her daughters, “Orrie” Cartwright Lipscomb. Orrie’s husband John T. Lipscomb was the first educator in public schools of Madison. When John Lipscomb as a child lived with his parents in the northwestern part of today’s Redstone Arsenal lands, he was only four houses away from that of the Lanier brothers who later moved into Madison from the central portion of the arsenal lands.

Arthur Lewis and Mattie Cartwright had five children: Herman Arthur Lewis (1874 – 1918, married Etta Abernathy), Nina Lewis (born about 1875 and married Levi Garrett), Cora Mae Lewis (married James Hermon Humphrey), James Hermon Lewis, and Oscar Bradley Lewis. Arthur H. Lewis was a trustee of the “Madison High School” (believed to be the same as the Madison Training School) incorporated in February of 1895. The papers of incorporation list the trustees as A. H. Lewis, J. B. Floyd, C. G. Fennel, J. A. Watkins, M. A. Bishop, S. M. Doolittle, and J. A. Humphrey. All of these men were prominent Madison pioneers and most of them are known to be buried in the Madison City Cemetery. Mr. Bishop is buried in the nearby Farley-Crutcher Cemetery, but it is not known where Mr. Fennel is buried.

Etta Abernathy married Arthur’s son Herman (Hermon) Arthur Lewis in 1896. Etta gave birth to Martha (“Mattie”) Belle Lewis, who married Gordon Pellham Hughes in 1918. Etta Lewis was a grandmother of Mattie's daughter Barbara Ann Hughes, who married Don Spencer, Senior. Barbara had a dress shop at 108 Main Street from 1972 to 1987. Barbara and Don were the parents of Don Spencer, Junior, who became the first president of the Madison City School Board when city schools separated from the county system in 1998. He had previously served on the City Council and as acting mayor for a time.

The connections of the Madison Lewis family to the lineages of George and Martha Washington are numerous. In his will, the first United States President left property to his nephew Lawrence Lewis. Through family ties with the line of Martha Washington’s first husband (Daniel Parke Custis), there were marriages that brought Robert E. Lee into the relationships. The Lewis family was among the Colonial settlers of Virginia, holding very large plantations around Charlottesville, where Thomas Jefferson built his own mansion and plantation. It was in Virginia that the name Meriwether became associated with the Lewis family, when Robert Lewis, father of Nicholas Lewis, married a daughter of Nicholas Meriwether. Nicholas Meriwether was a man of enormous wealth and owned an extensive plantation of many thousands of acres in Virginia. The explorer Meriwether Lewis married Lucy Meriwether. Meriwether Lewis was a close friend of William Clark long before Thomas Jefferson appointed his own close friend (Meriwether Lewis) to head the exploration of the Louisiana Purchase. Meriwether in turn chose his friend William Clark, a brother of the famous military man George Rogers Clark, to be his second in command on the expedition. Meriwether the explorer was born in 1774 in Virginia and died in 1809 in Tennessee. He was apparently murdered at a Tennessee inn as he returned along the Natchez Trace to Nashville.

The murder of explorer Meriwether Lewis has never been solved, but it is interesting that soon after the explorer’s death his cousin James Lewis settled within about a hundred miles of the route of the Natchez Trace where the explorer traveled. This cousin, James Lewis, married Nancy Watkins, and they named one of their sons Meriwether Anderson Lewis.

The son that James Lewis named Meriwether was born in Virginia in 1809 (the year of the explorer’s death) and was raised in Triana, after the family came here while Meriwether was a child. As an adult, Meriwether Lewis established his own plantation where the Boeing complex is now located between the runways at the south end of the airport between Triana and Madison. Meriwether and his wife deeded land for the first Masonic Lodge in Triana in 1854, while it was still a prosperous town on the river. Family tradition holds that Meriwether not only grew cotton, but he transported it to New Orleans on three paddlewheeled steamboats that he owned.

The immediate ancestry of Arthur, Meriwether, and James Lewis goes back through Nathaniel Lewis, who married Sally Harris and came to Madison County in 1818. Nathaniel’s father was Edward Lewis, who married Frances Bressie in 1763. Edward was a Revolutionary War soldier and is listed in the DAR’s Patriot Index. Another famous Lewis family member was David Lewis, who served as the 24th Governor of the State of Alabama, from 1872 to 1874. David is buried in Maple Hill Cemetery in Huntsville, and his portrait hangs on the wall in the Madison County courthouse. A nameplate on the portrait states that David was a resident of Madison, but he was generally associated with Lawrence County. He was born about 1819 and died in 1884.

The list of prominent connections of the Lewis family could go on at great length, but an abridged list of surnames associated with Madison that intermarried with the Lewis family include Humphrey, Hughes, Balch, Hilliard, Arnett, Hobbs, Reavis, Moon, Graham, Clutts, Strong, Dillard, Fletcher, McGaha, Harris, Maxwell, Jordan, Gurley, Clark, Garner, Blackburn, and Farrald. Additionally, Mary F. Lewis married John Withers Clay, son of Governor Clement Comer Clay, whose wife was Susannah Withers. Susannah grew up in the area that became Madison, and her father, John Withers, owned several parcels of land, one of which was along what is now Madison Boulevard where the Publix store is located. His family burial plot and primary plantation house were located on a hilltop at the south end of Research Park, between today's Old Madison Pike and Interstate Highway 565. Another of his plantation houses had its own Withers family cemetery, used by later generations. It is west of County Line Road by about a quarter mile and north of Madison Boulevard by about a half mile. John Withers' grandson, John Withers Clay, became long-time editor of The Huntsville Democrat, a historical newspaper of great reputation. As seen from the north Alabama connections alone, the Lewis family of Madison was influential far beyond the boundaries of the town.