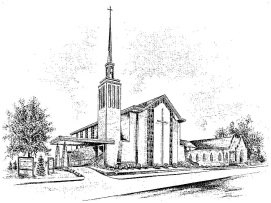 In September 1905 a group of 35 Christians who felt the need of a Methodist church on the east side of Huntsville assembled in the city school building on East Clinton Street for the purpose of worship and beginning a Sunday School. Out of this movement grew the Holmes Street Methodist Episcopal Church South. The pulpit was filled by visiting ministers until the Annual Conference, in November, sent the Reverend K. N. Matthews as pastor. The church was officially organized February 4, 1906.

Early in the year of 1906 the church building was purchased from the Episcopalians and moved with two horses from McCullough Avenue to a lot across Holmes Street where the Allens now live. This lot was leased from G. W. Yarbrough while an option was held on the present lot which belonged to minor heirs.

The first year the membership grew to 80. The pastor was paid $420.00 for the year and $125.00 was sent to the conference treasurer. Seven-hundred-twenty -two dollars was paid on the church that was valued at $2250.00. A small four-room house that stood on the lot the church held option on, was rented for $15.00 a month for the parsonage. The pastor’s salary for the second year was $625.00 and $180.00 was sent to the conference treasurer.

In 1907, the Reverend J. C. Bowen was appointed by the Conference as pastor of the Holmes Street Methodist Church. During his first year the membership grew to 263 and the pastor’s salary was raised to $1000.00

In April 1908, it was reported that eighty-two members had been received into the church during the four preceding months. It seems that an outstanding revival had been held during that period.

At the quarterly conference of 1908, a report was made by a previously appointed committee that the John Lowe lot had been purchased for the church. It was at this quarterly conference that it was decided that the name Holmes Street Church would be retained. In 1909 the quarterly conference authorized the Board of Trustees to sell the lot south of Holmes Street and the one on the corner of Walker and Patton and buy the presently owned lot at the corner of Patton and Holmes known as the Thurston lot. Seven hundred dollars and interest was paid at this time on the $3,000 price of the lot. The church was then moved to the back of the new lot facing Patton Street (later the street name was changed to Dallas) reserving the corner for building a new church.

After WW II was over conditions began to improve, but the idea of building a new church had been abandoned. The old church was enlarged at this time and veneered with brick. By now the church was called ‟The Movingest Church in Town”.

During the last year of the Rev. V. H. Hawkins’ pastorship (1948-1952) the new parsonage on Wellman Avenue was built.

In the year 1953, plans were begun to enlarge and remodel the sanctuary. Again the congregation began meeting in East Clinton School.

On February 7, 1954, the opening service was held in the sanctuary that had been enlarged, redecorated and newly furnished throughout. Later during the summer, the sanctuary and annex was air-conditioned. By October 1955, all indebtedness had been paid off and plans to build an educational building were being discussed.

Our educational building was started and completed during the pastorate of the Rev. Martin Coleman. Building Committee members were O. J. Taylor, Madison Pennington, Harold Herrin, Russell Wilson and Selvin Coward. This was a great venture in faith and there was some apprehension about undertaking this task. But the success of the project was thrilling to all of Holmes Street’s members. The Rev. Coleman served as pastor from 1952-1958 during which time Mrs. Joe Hill (Miss Essie) became church secretary and served until her passing in 1973.

The Rev. N. E. Austin was assigned to Holmes Street Church in 1958. He served as pastor for almost five years. The educational and stewardship programs of Holmes Street Church were greatly improved during his period of service. Junior church was started also during this time. It was during this period that we accepted the support of a full-time missionary and the principle of ‟second mile giving” was cultivated as a means of support for this project.

The Rev. Bill Friday came to Holmes Street in 1963. It was during his pastorate that the new sanctuary was built and occupied in 1967. The building committee members were George Hurley, chairman, Charles Havens, Sam Hess, Milton Jenkins, T. A. Locke, Marvin Berry, J. B. Wakefield, and Rev. Friday.

A new parsonage, located at 2508 Isabelle Cir., NE was purchased in 1972 and first occupied by the Rev. Burl Oliver and family.

The Rev. Jack Phillips was Holmes Street’s first full-time associate minister. The Rev. George Rice, retired Methodist Minister, was employed by the church as Minister of Visitation in 1965. The Rev. Jerry Abbett replaced Bro. Phillips as our associate in 1965. Rev. Jim Fennell was the associate under the pastorship of Rev. Butterly. Helen Prince was hired as Diaconal Minister replacing the associate pastor in 1973 and retired in 1987. Eddie Johnson came on board as the Director of Christian Education and Program in January of 1989.

During the mid-1980’s the membership struggled with what to do with the old sanctuary. The Old Town Organization had specific requirements on construction that prohibited a complete tear down and reconstruction. The final decision was to leave the front foyer part of the building and to tear down and rebuild the rest. The Building Committee consisted of Ed Snow, Chairman, Gertrude Blackwell, Judy Tardy, Milton Pitts, Robert Moore and Ralph Jones. In 1987 the staff moved into what has become known as the Asbury Center which houses the church offices. The back half of Asbury Center was turned into a lovely fellowship room named ‟Founder’s Hall”. Founder’s Hall has become a major meeting place at Holmes Street and is the host room for Sunday evening worship, socials, teas and showers, receptions, community meetings, church board, council meetings and committee gatherings.

In 1988 an elevator was added to the sanctuary building to accommodate those with handicapping conditions. The fellowship hall was renovated in 1990 and the kitchen was refurbished with commercial equipment at that time.

Over the years Holmes Street has been blessed with good leadership and a supporting, warm and caring congregation. An important mission in Huntsville has been the food pantry and a love and concern for those less fortunate in the community. A motto selected in the 1970’s ‟Striving to be more like Christ” holds fast even in the ‛90s. Let us continue in this tradition as we add to our history each day.

Ministers Serving Holmes Street United Methodist Church Since It Was Organized in 1906: