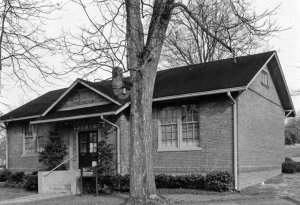 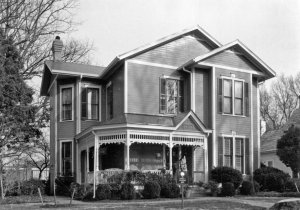 White Street has a short run of only three blocks within the Twickenham District, but it contains a considerable spread of building ages and types. These include a 1920s duplex (No. 106 and 108), the 1828 Huntsville High School (Merts Center), an early 20th century Christian Science Church (No. 201, now part of the Merts Center), and houses dating from the early 19th to the late 20th century.

No. 201, the former home of the Christian Science Church, is a simple gabled brick building with wide, thin roof eaves of bungalow influence. In about 1975 the church moved to Pagan Hollow and the building has been since used by the City School System.

The steel-sashed east and west wings of the Merts Center were added in the 1960s, in the then contemporary utilitarian fashion. At the same time the original attractive divided-light sashes of the 1928 building were replaced with steel "factory" sashes with thin profiles and wide horizontal panes. In 1986 the School Board office was moved into the building and the factory sashes were removed from the main building in favor of types like the original attractive design. The east barrel-vaulted entry canopy was added at this time to serve the new plant-screened parking area across White Street where the school ball field was once located.

Numbers 314, 316, and 318 are all present on the 1949 Sanborn map and appear to be of the 1945-1949 period. No. 318 is sheathed with an artificial "stone" (colored and patterned stucco) called "Permastone," a material much vilified for being an imitation, but apparently of excellent technical quality for it appears unblemished after half a century.

The Harrison family owned five late-Victorian homes (Nos. 315, 317, 401, 403, 405) on this street to house various family members. This is the family who founded and ran one of Huntsville's most enduring retail establishments, "Harrison Brothers" (hardware, furniture, tobacco, etc.). This business remains, under the care of the Huntsville Foundation, in an 1836 building on the south side of the Courthouse Square.

No. 402 is a very clear-cut example of wood shingled Ranch Style Ranch-Colonial, apparently influenced by 18th century Cape Cod houses but certainly not an imitation of them. It probably dates from the 1950-60 period, with a garage added in the 1980s.

Nos. 407, 423, and 425 were all built on vacant land in the 1990s. Each is a variation on the two-story brick Ranch Style Colonial Revival style, with elements of both Georgian and Federal influence.