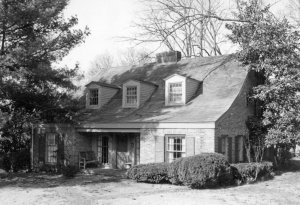 White Circle is the newest street in the Twickenham District. The 1949 Sanborn map shows it only partly extended from White Street and with no houses, indicating it was probably under construction at that time. Most of the houses on White Circle are thus from the 1950s and 1960s, and the majority are of the one-story Ranch Style Ranch-Colonial type. No. 304 is a two-story exception and No. 305 is a handsome 1-1/2 story Colonial Revival with a flaring curved roof profile and an air of good design integrity.