The I. Schiffman Building

The I. Schiffman Building 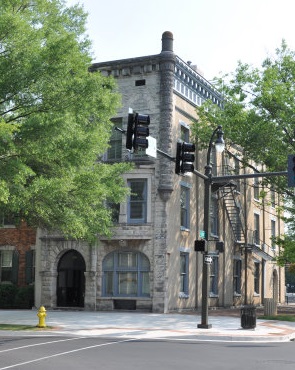 The I. Schiffman Building, listed on the National Register of Historic Places in 1980, was built around 1845. Originally it was a Federal style building consisting of three bays. During Urban Renewal in the 1960's the northern two bays were demolished leaving only the south bay, the footprint of which is 1/3 the size of the original building. The surviving south bay had been stylistically transformed in 1895 by the Southern Savings and Loan Association from its original Federal style to Richardsonian Romanesque. Today it is one of the few surviving commercial examples of Richardsonian Romanesque architecture in Alabama. During renovation the limestone facade was added, the archways cut, and the building interior reconfigured to side hall and offices on all three floors. The interior was fished out with pressed tin ceilings, carved cherry wood on the first floor, oak on the second and third, mission style chandeliers using carbide for lighting, corner fireplaces, carved mantels and two walk in vaults located on the first floor and basement. 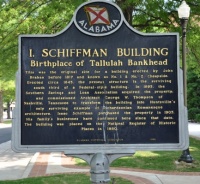 A number of interesting people have been associated with the building. In the early 1820's Huntsville portrait painter John Grimes advertised that samples of his work could be viewed in the rooms above Tilford's store in the first building on this site. Eighty years later, an illustrious Alabama family lived briefly in the building. The lawyer William Brockman Bankhead lived in a second floor apartment. He was attorney for the City of Huntsville, 1899-1902. He later served in the U. S. Congress for over twenty three years and was the Speaker of the House for four years before his death in 1940. While occupying the apartment, his wife Ada Eugenia Bankhead (1880-1902) bore two children. Their second child, Tallulah was born January 31, 1902 in the front room of the second floor. A month after Tallulah's birth, her mother became ill and died. Shortly after his wife's funeral William Bankhead moved his young family to his family home in Jasper, Alabama, where Tallulah and her sister were raised by their aunt and grandmother. 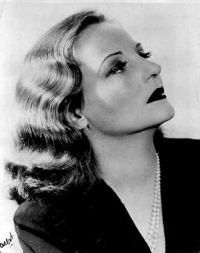 Tallulah Bankhead (1902-1968) had a remarkable acting career that spanned over fifty years. She was nationally renowned for her dramatic roles in the theater, film, radio and television. Her career began as a young girl in silent film. She then went to England where she became the toast of the London Theater in the late 1920's. She returned to this country in the early 1930's to make six movies for Paramount and began her long career as one of the leading actresses of the American theater. A ravishing beauty in her youth, she was known for her deep sultry voice and for calling everyone, "Darling." Her quick wit and uninhibited exuberance added to her fame. Her best known dramatic performances are her award winning roles in Lillian Heilman's, "The Little Foxes" (1939), Thornton Wilder's "The Skin of Our Teeth" (1942) and the movie "Lifeboat" (1944). For two years audiences listened every Sunday night to her sultry voice on "The Big Show." After writing her biography in 1952, Tallulah appeared regularly as herself in numerous television productions. During her career, which spanned over 50 years she appeared in 56 plays, 19 movies, and scores of radio and television productions. She died in New York in December 1968 at the age of 66 and is buried at St. Pauls Kent on the Eastern Shore of Maryland.

Today, as the owner of the I. Schiffman Building, I have my ancestors to thank for the honor and privilege of being the steward of the I. Schiffman Building that I inherited. From 1905 until 1995 my great grandfather, my great uncle, my grandfather and my father cared for the building and kept it in good repair, making sure there were no changes that would alter its architectural integrity. They guarded it from the ravishes of senseless modernization and destruction that took so many of Huntsville's nineteenth century buildings, and kept it intact for the benefit of Huntsville, its citizens and future generations. A second renovation carefully modernizing the building according to strict historic tax credit standards occurred in 1997. Now with good maintenance in the years to come, the life of the building will be extended for another hundred and fifty years.

Before closing, it is most important to give credit to the I. Schiffman Building itself for the role it has played over the years as the repository for the Bernstein, Herstein, Schiffman and Goldsmith Collection of archives and artifacts. The Building with its wonderful walk in vaults on the first floor and in the basement have been the place where the archives and many of the artifacts of the four families mentioned above have been stored over the last 100 plus years. My ancestors were meticulous in saving their important family artifacts, documents, letters, photographs, books and business records through the generations. Due to their efforts along with the I. Schiffman Building serving as the repository for the Bernstein, Herstein, Schiffman and Goldsmith Collection, a real treasure was assembled. In 2011 the Bernstein, Herstein, Schiffman and Goldsmith Collection of artifacts was donated to the National Museum of American Jewish History in Philadelphia where it is considered to be one of the major collections of the Museum. Over the period from 1980 to the present, family papers and collections have been donated to the Huntsville Madison County Public Library Archives, several collections to the Breman Museum in Atlanta, and a collection of Holocaust papers to the Holocaust Museum in Washington, D.C. with copies to the University of Alabama in Huntsville, Alabama.