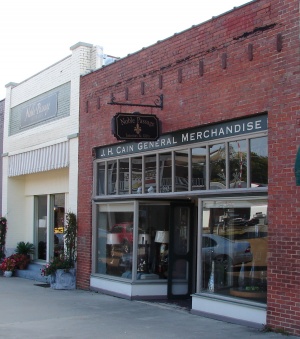 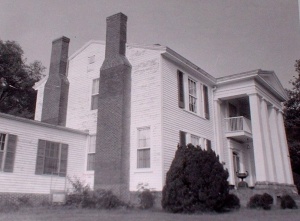 Because of my research into the life of James Henry Cain, an early Main Street merchant of the town of Madison, I took special notice of a Cain “bastardy case” while photographing the old court records returned to the Madison County Records Center as part of the Bragg Family Collection. James Henry Cain was married to Charlotte (“Lottie”) Slaughter, a daughter of Dr. John Slaughter, who had married Mary Lanford. Mary was a daughter of William Lanford, who built the large house at 7400 Old Madison Pike just west of the new Raytheon office building and on the east side of Indian Creek, north side of the Pike.

My research of previous years has shown that James H. Cain (born in 1871) was a son of Thomas J. Cain, who was born in Limestone County in 1830. His father was Allison Chappell Cain, who was born in Virginia in 1800. However, this particular “bastardy case” court files from the Bragg Family Collection involved an older Thomas Cain, first of the surname known to have come to the area. The elder Thomas Cain was born in 1784 in Virginia, according to the 1850 Madison County census, where he is listed as a watchmaker. In that census record, he had no son of the right age to be the then-50-year-old Allison Chappell Cain. Of course, it would be highly unusual for a son of that age to be living in the household of his father, unless one of the men was infirm or disabled or incapacitated. The elder Thomas Cain was listed as 66 years old in 1850, living in Huntsville, where he had living with him a wife Sarah of age 55 (born in Virginia) and a male child named Waddy (age 22) plus eleven boarders of various surnames and ages ranging from 7 to 44. Any direct connection between Allison Chappell Cain and this 16-year older Thomas Cain is not yet proven, but it is considered likely that there was a connection of some type.

The court case of Thomas Cain today would be called a paternity suit, but it was not Thomas who was the accused father. Rather, he was suing another man (Fountain C. Boston, age 30-40 in the 1830 census), who had been a boarder in the Cain house, for impregnating Thomas' 15-year old daughter Caroline H. Cain in 1828. The Cain family had come to Huntsville around 1815. Thomas had a jewelry store dealing in silverware, gold, and watches located on the north side of the town square. Additionally, his wife apparently ran their household as a boarding house for both men and women who worked in the town. Caroline's child was delivered on the 29th of January 1829, but the Cain suit claimed that Boston had sexual intercourse with Caroline “many times” in 1828. George Steele, noted architect of Huntsville's most impressive structures, posted bond for Thomas Cain to cover costs of pursuing the lawsuit. Lauriner S. Banks and Thomas B. Murphy posted $4,000 bond for Fountain Boston in the case.

Thomas Cain claimed that the pregnancy led to $500 in medical costs and nursing care for Caroline plus $10,000 in “loss of services” of his daughter to him in his “old age and infirmity.” Depositions were given by numerous witnesses (boarders) regarding the circumstances of the case, supporting both sides. Generally, the consensus seemed to be that Caroline was promised marriage by the older Fountain Boston, and the two had consensual intercourse on occasions when Caroline's parents left the house, hiding the fact from the parents. However, when the pregnancy became obvious, Mr. Boston left the area, whereupon both he and several of his supporting witnesses had to be summoned from other counties and even from Nashville. In fact, Logan Childers, one of Boston's supporters, failed to answer the summons from Franklin County, Alabama, and was fined $100 for “failure to appear” at the scheduled court hearing in 1829.

After compiling 39 pages of testimony in Cain's Case Number 7033, the Circuit Court found for the Plaintiff, Thomas Cain. However, the award was not for the $10,500 claimed. The court awarded a cash payment from Boston to Cain for only $47.72 in April of 1830. The court also held Thomas Cain responsible for paying all court costs, including fees due to the sheriffs of Franklin, Jackson, and Lauderdale Counties of Alabama. It would seem that while the Defendant (Boston) was in fact guilty as charged, the court must have felt that Caroline was possibly a bit too willing as a “partner in crime.” Besides, her father was most likely considered to be a far better off than he claimed and much wealthier than Boston. Lack of a proper level of parental supervision could have also been a factor in the determination of damages. In any event, records of Madison County show that Caroline was licensed to marry Samuel Spencer on October 10 of 1833, according to page 153 of Volume 4 of the marriage books. However, on page 154 of the same book, Caroline Cain is also shown as being licensed to marry Samuel Hallon on October 11 of the same year. Either the surname was mistakenly written on the 10th for Samuel and then the first record was not stricken from the book, or perhaps Caroline had the shortest marriage in the county's history to Mr. Spencer, with a very quick subsequent engagement to Mr. Hallon. History is often filled with strange stories.