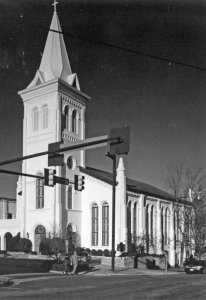 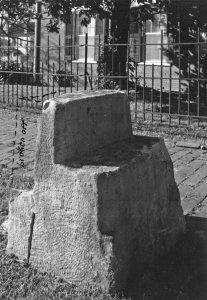 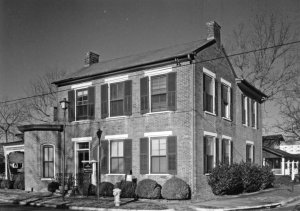 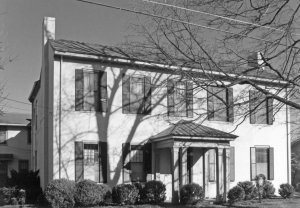 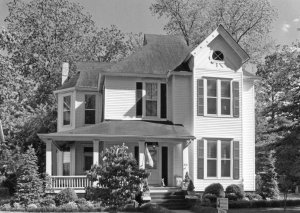 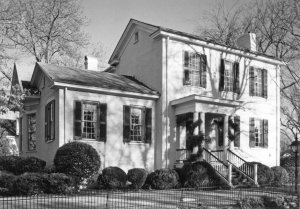 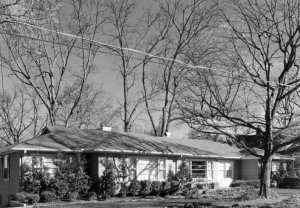 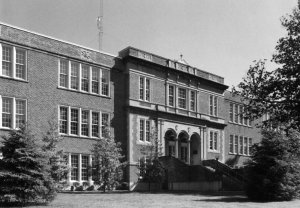 Randolph Avenue, like its parallel twin to the south, Eustis Avenue, is a very long street, about one-half mile within the District and largely unbroken by cross-streets. Of the 21 buildings shown on the 1871 View, ten remain. The architect-builder George Steele built the original portions of Nos. 409, 413, 414, 423, 519, and 603. This number of houses by Steele is not surprising because he owned this land before it was developed. There are more known surviving Steele buildings on this street than any other.

The First Methodist Church at Greene and Randolph is a Romanesque Revival design built over a period of several years of effort from 1866 to 1873. Its shell shows to be complete on the 1871 View, but the interior of the sanctuary was not completed until 1873. The bell tower was originally capped with five Romanesque finials which were unfortunately removed in the zeal for modern simplicity in the 1960s.

A small and engaging medieval detail is the numerous stone angel-faces at the springline of each bolection-mold of the round arches over the windows and doors. In 1969 a 3-arch arcade was added at the bell-tower west entry to provide a sheltered way to the early 20th century buttressed stuccoed Sunday School that adjoins the church building.

No. 301 is an early 20th century stucco-and-clay-tile roofed Spanish Style building that originally fronted on Greene Street and housed four apartments. It has served as offices since the 1960s.

No. 303 is a Victorian silk purse disguised as a sow's ear. It was covered in a makeshift fashion with common brick in the mid-20th century, boxing in the original and attractive southwest verandah and hiding all but the roof of the original late-19th century clapboarded house. Several 1930s photographs exist that show the original beauty of the house, which could be easily regained by simply pulling off the brick veneer and putting back the porch trim per the photographs and site evidences. A 1995 request to demolish this "ugly house" to park five cars in its place was denied by the Huntsville Historic Preservation Commission. Only the crude mid-20th century covering is ugly.

The c. 1835 Sprague house at 307 is a classic two-story brick gable-roofed porchless Federal Period house. Its gable-chimneys are not true chimneys but are just for looks. Similar original false chimneys are at 414 Randolph and 600 Franklin. The real chimney at the Spragins house is the one hidden behind the roof-ridge. In the early 19th century false windows were also used for visual balance as at the 1834 Leroy Pope Walker house and the 1849 "President's house" (made into a true window in the 1980s).

The late 19th century west addition to the c. 1835 Sprague house is a rare happy example of a flamboyant Victorian addition that complements a staid Federal Period house. The northeast rear wing is also late 19th century. The original beaded clapboarded kitchen building (located north of the northeast wing) was demolished in c. 1971. Photographs are in the collection of Harvie P. Jones.

The early 20th century apartment building at 310 takes its design cues from Jacobean contributions of 17th century England. The corbeled gable-parapets, chimneypots, and projected gabled-and-arched entry are all reminiscent of that style.

No. 405, an attractive Italianate style house, conceals an early Federal Period house. A 1908 postcard indicates that the house has been considerably altered even after that date to its 1997 appearance. The present paired-Ionic-columned verandah looks early 20th century. The present bracketed hipped roof is evident on the postcard, but the narrow round-arched windows are shown to be single rectangular openings. A small Victorian porch is shown. The end result of all the changes is pleasing, however.

No. 410 is an Italianate house, apparently post-1871, that experienced a fire in the early 20th century and thus received a Bungalow Style roof with wide, thin eaves, exposed-rafter ends and triangular bungalow-brackets. Its northwest bay window, shown on the 1890s Sanborn maps, was gone by 1972 and was put back in the mid-1970s.

Nos. 413 and 414 in 1972 were disguised by bungalow porches, since removed. No. 413 is the 1849 "President's house," so called because it served as the home of the President of the adjoining Huntsville Female College (which burned in 1895). The President's house is a modest Greek Revival example that in form is similar to the Federal Period houses, with Greek Revival comer pilasters and trim added. Its small 1980s portico is similar to others of the Greek Revival period.

No. 414 was hidden in 1972 by a heavy and wide bungalow porch. All that was required to restore this small Federal Period gem was to remove the 1920s porch and install a small wooden stoop with early 19th century detailing, open underneath to allow light and air to enter its original window that is beneath the stoop and had been blocked by the concrete-floored 1920s porch. The cement-stucco on the house is early 20th century and could not be removed.

The 1845 Figures house at 423 was hidden in 1972 by a heavy-handed 1920s two story 30-foot-wide porch, which was removed in about 1980. The present small portico is designed to fit the profile and plan size of the original, whose traces were still clear on the front wall and in the soil. The western three bays of the house were built first and the eastern two bays were added before 1861, as evidenced by a joint in the front wall and the 1861 map.

No. 422 is an example of the Craftsman Style, as distinguished from the generally heavily-proportioned bungalows of the same period.

Nos. 424 and 426, both built in 1889, and both with early 20th century verandahs, are identical in design except for the gable ornamentations. The houses are a mix of elements of the Eastlake style and stick style. The paucity of decorative elements could be a result of later stripping, or a desire to get away from scroll-sawn excesses. Certainly the original verandahs would have been more elaborate and are shown on the 1913 Sanborn map to be shallower, as was typical of late 19th century houses.

An example of late-Victorian simplification of ornament are the three almost identical c. 1895 cottages at 505, 507, and 513. A slight amount of "punched" wood work in the gables of 505 and 507 is the main surviving concession to ornament.

No. 516 is a fairly rare Dutch Colonial house of the early 20th century with unusual recessed dormers. The northeast porch was enclosed before 1972. Its somewhat similar neighbor, No. 512, appears to have non-original brick veneer. It was probably clapboarded, as was usual for the Dutch Colonial style.

George Steele's own residence at 519 was built in 1824. By 1971 it was a clash of conflicting forms of the early 19th century, the late 19th century (west wing), the early 20th century (wide front verandah), and the mid-20th century (makeshift roof modification to make access to an attic apartment). The warring later elements were removed or modified. The five or six ad-hoc apartments inside were taken back to the original rooms for single family living.

In the early 19th century Federal Period, houses typically had "clipped" or flush gable-eaves and the Steele house is no exception. The present box-cornice gable eaves were added later, perhaps in the 1850s when they became fashionable. A careful look at the front horizontal roof cornice reveals the joints where the cornice was extended about 12 inches at each end to accommodate the new extended gable-cornices. A look at 603, 409 and 414 will demonstrate the typical Federal Period flush gable-eaves.

The c. 1832 Cabaniss house at 603 has what certainly appears to be its original small portico (except the original wood floor has been rebuilt in concrete). This is another George Steele house and is in almost pristine condition other than its eastern early 20th century porch. The west wing is somewhat later than 1832 but is a pre-1861 addition.

No. 607 is a type that is just on the cusp of being recognized as "architecture" and worthy of preservation and notice. It is an excellent architect-designed 1950s ranch house, with no leanings to ranch colonial. Its entire emphasis is on low, spreading horizontal lines and easy informality.

No. 609 is a charming Tudor cottage, showing that good design is not limited to large or costly houses. It is probably 1920s.

The 1928 Huntsville High School (now the Merts Center) had, in the 1960s, been stripped of its original nine over nine pane double-hung sashes, cast iron porch lamps, and cast stone roof finial and had steel factory-windows put in that robbed the building of its original Renaissance-Palazzo derived dignity and proportions. This situation was corrected in 1986 when the City Board of Education converted the building to School System offices.

The hand-sawn and chiseled ashlar-pattern limestone wall that fronts the Merts Center is an 1830s survivor of the large and now long-gone house that shows on the 1861 map and 1871 View. In about 1990 the School Board inadvertently removed the hand-cut 1830s limestone slab walk that also fronted the building, not realizing what it was. Each slab was about four feet square. A few pieces of this type of early handmade walk survive at 308 Eustis Avenue and 300-304 Gates Avenue. Nos. 600 and 603 Randolph Avenue still have their early 19th century closely-set brick walks as well as a few other places in the District.

Randolph Avenue still has at least four early limestone carriage-steps, such as at 603. A few others survive in the District, on Franklin and other streets. 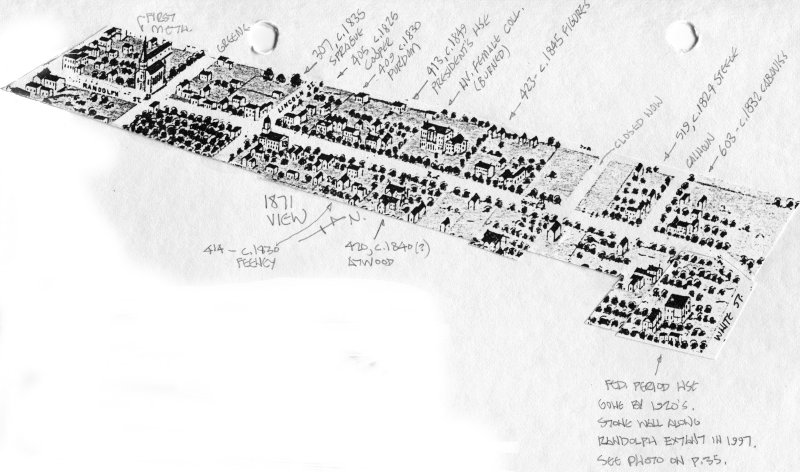