•  The title of "President of Huntsville" was used instead of "Mayor" in the early years. - Editor's Note

•  "Son of Major Thomas (1786-1863) and Elizabeth Walker (Coleman) Figures, who came to Alabama in 1810 and settled in Coffeeville, where they lived for the rest of their lives, the former was a major in Gen. Coffee's command in the Indian War of 1816, the latter lived in Elbert County, Ga., and later in Maury County, Tenn., before her marriage; brother of Charles Coffee Figures, who was born in Fort St. Stephens where his mother had fled for protection from the Indians; grandson of John and Mary (Walker) Coleman, who moved from Virginia to Elbert County, Ga., then to Maury County, Tennessee, and finally to Alabama, the former was born March 6, 1765, and the latter, June 30, 1767. " - Owen

•  "Mr. Figures received his education from an old log school in the country near Coffeeville; and when he was twelve years old, went to Huntsville to live with his uncle, John James Coleman, serving an apprenticeship in his uncle's newspaper office. During his apprenticeship, he read a course of law, and when he was nineteen years old, bought the paper from his uncle, becoming sole proprietor and editor. The paper was issued under the name of the 'Southern Advocate,' before the War of Secession, and after the war was known as the Huntsville 'Advocate.' Mr. Figures remained the editor until his death in 1872, with the exception of that period during the war when the Federal troops occupied Huntsville, at which time the publication was suspended. He was mayor of Huntsville before the war and for two terms after the war; and served as State senator from Madison County during the Confederacy. He was a presidential elector on the Douglas ticket for Alabama, and was registrar in chancery at the time of his death. He was restrained from taking part in the War of Secession by ill-health, but gave his eldest son to the Confederate cause. He was an old school Whig, and after the war accepted the provisional government during the first term of President Grant, but turned against the reconstruction policy, supporting Horace Greeley for president in the next campaign." - Owen

•  "William Bibb Figures was the editor of the Advocate before the war and until his death in 1872. Figures was quite active in local politics, serving as mayor of Huntsville before the war and for two terms after the war, chairman of the Fifth District Executive Committee of the Union Republican Party, justice of the peace, and registrar in chancery . Of the old Whig school, he approved of the provisional government during the first term of President Grant. Figures had the reputation of being a competent editor, who reported every happening carefully and accurately." - Bounds

•  His newspaper office was on the east side of Franklin between Public Square (Eustis) and Gates. - City Directory, 1859-'60

•  "He was a member of the Huntsville Bar Association" - AAUW

•  He was a member and elder in the Presbyterian Church. - Owen

•  Articles of Incorporation were filed for the Presbyterian Church in Huntsville in February 1869. William B. Figures was listed as a Board of Trustees along with John J. Fackler, Samuel Coltart, Isaiah Dill, Robert W. Coltart, Robert G. Smith, and Mathew W. Steele. - Shenk & Shenk

•  "Mr. William B. Figures, mayor of Huntsville in 1869, reminded the aldermen that the existing charter of Huntsville had given the mayor and aldermen power to establish a school or schools for the children of the community, to employ teachers, and to fix their salaries. He said that this had not been implemented and closed with a strong statement that the need to do so was urgent. Evidently, the aldermen and citizens reacted favorably to his appeal. It is likely that a petition for a new charter was made, for an incorporating act, known as the Charter of 1869, was approved in March 1870." - Schools

•  Maybe because Mr. Figures had been responsible for the local newspaper, although out of print during the conflict, he and his wife seem to be central to the news gathering and sharing in the community. - Chadick & Rohr

•  The Figures' house was next door to the Chadick home. So that is probably one of the reasons Mr. and Mrs. Figures factor so prominently in her journal. - Chadick & Rohr

•  The Figures' Home at 423 Randolph Avenue was built around 1845 by George Steele and purchased by William Bibb Figures in 1850. - AAUW

•  Mrs. Chadick enters in her journal: "Clara, George and Davie have gone fishing with a party of children with Mr. Figures ' protection. I fixed them off with a basket of refreshments. I made them a dish of tictac-parched corn, with molasses candy poured over it, of which they were particularly proud. They went off in high spirits, and I hope their enjoyment may equal their anticipation. They have been shut up inside the picket lines so long they were perfectly jubilant at the thought of escaping for one day." - Chadick & Rohr

•  Figures is on a list of "Rebels" that had conducted themselves very much like Yankees, during the occupation. This would not have been a compliment because it is offered after this paragraph "At daybreak of this morning, an immense amount of stores were burnt by the Federals. Tons of meat, a great deal of which was stolen from the country around: barrels of sugar and molasses, from 50 to 100 barrels of corn, boxes of soap and candles, in short, a great deal which, on no account, would they have given to the Rebels." - Shapiro #2

•  The Union Army took editor Figures press off to Maysville in December 1863 for the purpose of starting a newspaper in February. - Record Vol. 1

•  September 5, 1868 - Two more companies of troops arrived, bringing the total to eight and a total number of men to about 500. They camped on the Whitesburg Pike although General Rugers' headquarters were in the Calhoun House. Mayor E.B. Clapp resigned. Governor Smith appointed W. B. Figures.
June 22, 1869 - "Mayor W. B. Figures announced that velocipedes (bicycles) were prohibited in the streets and on the sidewalks due to the danger to people in vehicles and on horseback." 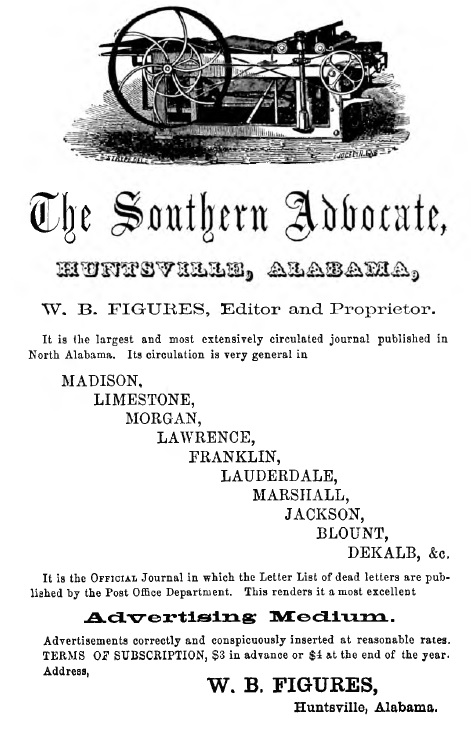