•  "A short distance from downtown Huntsville was a fascinating underground cavern, almost hidden by two small entrances. Fuller, in 1888, purchased the land which included the cave, with the idea of turning it into a tourist profit.


If indeed that was the venture, Fuller would succeed. He named the cave Shelta after his daughter, made plans to incorporate the Shelta Caverns Company, and formally opened the cave to the public in 1889. Joining in the incorporation were Lawrence Cooper, Ben Hunt, L. D. Bass and O. S. McQuiston.
One room was said to be large enough to enclose six football fields side by side. A popular new attraction?the caverns had their share of visitors.
Before being sold for taxes in 1896, thousands had made the Pilgrimage to see the cave. Before many years had passed, it became the first known cave in the nation to have electric lighting.
The owners, looking for things different, outfitted the cave with a bandstand and dance floor, luring tourists from throughout the nation, as well as the homefolks, for a unique experience.
The sound of a band in the yawning cavern must have been something to remember as the melodic tunes echoed underground.
But even more memorable to the courtships that developed there were the boat rides in the underground lake.
Editors of the Alabama Press Association came to Huntsville in 1889, and saw for themselves.
Cave formations were given proper names by the editors, including such names as Mary's Lamb; Pink Cameo; Royal Bengal Tiger; Lion; Jumbo Elephant; Gothic Chapel; Hall of Statuary; Cathedral of Milan; The Titan Hand; Devil's Bathtub; Stone Chimes; Cupid's Court; Horn of Plenty; Diamond Cliffs; Titania Grotto; Gold Rock; Giant Ribs, and?for the underground lake? Stygia Flood.
Today many of the formations have been vandalized, but, too, the relics of the days of the big bandstand are still visible in rotted timbers of the dance floor that once vibrated to the rhythms of musical splendor.
The National Speleogical Society bought the caverns in 1968 with a two-fold purpose. For one, there were those who wanted to dynamite the cavern entrance to make way for a shopping center parking lot, but the main reason for preserving the caverns was because of its ecological life found nowhere else in the world.
The cavern still possesses a certain variety of blind shrimp found nowhere else. Speleogists roam its bowels today, but the facility is closed to the public, except by special arrangement. The Huntsville Grotto of the National Speleogical Society manages the cavern.
To add to the attraction, the Shelta Caverns Railroad was planned during 1888, to carry passengers from downtown Huntsville and to bring them south from Tullahoma, Tennessee, to see the cave." - Record

•  "Just a few miles up Pulaski Pike, well within the city limits, is a cave that was once heralded as the most popular nightclub in this area.
The early history of Shelta Cave is lost in the shroud of history, but some of the earliest stories tell of Confederate soldiers hiding in the cave to escape searching Union soldiers. One rumor that persists to this day concerns a bloody hand-to-hand battle supposedly fought in the depths of the cavern on the shores of a vast underground lake.
Like any other large cave, it has legends woven around it concerning buried treasure, ghosts, and eerie noises. These remained just legends with no basis in fact until 1888 when a Mr. Bolen James sold the land to a Mr. Henry Fuller.
Not much is known about the early life of Mr. Fuller, but judging from his actions he must have been a born entrepreneur.
Immediately after taking possession of the cave he hired a team of carpenters to install steps down into the main chamber. Next he assembled a crew of craftsmen to install a dance floor in one of the great rooms with large stand-up bars at each end. He made no secret of the fact that he intended to open the grandest, fanciest, and most unusual dancehall in Alabama.
Huntsville had seen its share of weird, wacky ideas, but a dancehall in a cave? Even for Huntsville's standards that was too much. Townspeople began to call the yet uncompleted dancehall 'Fuller's Folly.'
As is true in many a new business, Fuller soon found himself facing a slight problem?too many ideas and not enough money. Reluctantly he let himself be talked into forming a corporation called, appropriately enough, Shelta Cave Corp. With this new influx of money from investors came new opportunities and it wasn't long before Fuller heard of a new attraction in Nashville that he thought would be perfect for the business.
There had been much talk in Huntsville about a new invention called 'electric lights.' But while most people dismissed it as just another crazy idea, Fuller was determined to light his dance floor with the 'marvel of modern technology.' Within days of Fuller's visit to Nashville, workmen arrived to begin stringing wire throughout the cave.
Although few people realize it today, when Fuller pulled the switch on his new lighting system, he earned himself (and the dancehall) a place in Huntsville's history as having the first electric light bulbs in Madison County.
Even this was not enough for Fuller, for as he cast his eyes upon the vast underground lake he began to see another possibility for potential profits. Within the week neighbors watched in amazement as workmen unloaded three large boats from a wagon and awkwardly maneuvered them down the steps.
The citizens of Huntsville must have had a good chuckle when he announced his intentions of providing 'Underground Boat Rides.' And, as if that was not enough, he purchased hundreds of Japanese lanterns to hang overhead!
Finally the day of the 'Grand Opening' arrived, and true to Fuller's predictions, crowds thronged the cave to see the marvel of electric lighting, ride the boats and dance to the sound of a newly hired band. With the admission price of one dollar, Fuller should have been able to make a profit, but unfortunately, he was too deeply in debt. Also, the townspeople, after making one or two visits to the entertainment Mecca, quickly lost interest.
Desperate for money, Fuller began to travel throughout the South promoting Huntsville and Shelta Cave as a convention center. Evidently he had some success, as the Huntsville Mercury in 1889 ran an article about a gathering of the press association: 'The entertainment of the Press Association by the citizens of Huntsville closed today with a grand barbecue in Shelta Caverns and nearly one hundred delegates and their ladies were in attendance. The affair was gotten up in a delightful manner and the beauties of the place were fully investigated by the astonished guests.'
According to rumor, Fuller, or one of his cohorts, in another effort to stimulate business, (and keep down overhead) actually operated a moonshine still in one of the dark corners of the cave. Years later when it was discovered that Shelta Cave was the home of a rare species of blind shrimp, one local wag laughed and said, "Hell, that lickker made a lot of people almost blind, I reckon some of it could have spilled into the lake!"
Another story of the day concerns a duel fought over a lady's honor at the edge of the dance floor. The gentlemen, each slightly intoxicated, were pursuing the same girl at the same time when they happened to accidently meet at the dance. Harsh words were exchanged and to everyone's horror, they pulled pistols from underneath their coats. Both fired, and both missed. Fortunately they let themselves be led away before real harm could be done.
The only casualty of the duel was a member of the band who was slightly injured by a falling stalactite.
As almost any nightclub owner can tell you, crowds are fickle, and within a few years the dancehall was again facing financial ruin. This time, even Fuller's salesmanship could not save it. On June 28, 1897, the cave was sold at a sheriffs sale on the steps of the courthouse to settle a judgment.
Although there is no documentation to support it, natives of Huntsville, who remember the 1920s and 1930s, swear that there was once a speakeasy located in the cave. Other sources claim that moonshine was produced in the cave at intervals all the way up to World War II. Another persistent rumor claims the cave was used as a liquor and beer warehouse during prohibition.
In 1968, after being neglected for years, the cave was purchased by the National Speleological Society. An iron gate has been placed over the entrance to prevent accidents." - Carney

•  April 25, 1890 "The Eighth Wonder of the World" Shelta Cave - Lake Como was opened in the center of the cavern (under Huntsville). This cavern has been lit with electricity and will have an orchestra for guests to dance. Boats float around the raised dance platform and the vaulted roof, accented by grand stalagmites, covers eleven acres." - Eden

•  "Shelta Cave has two sinkhole entrances, is 2,500 feet long, and contains a seven acre lake. In the nineteenth century it was a commercial cave with an underground dance hall. The cave used to abound in underground wildlife, including gray bats, beetles, and crustaceans, and was the only known habitat of the cave crayfish, an unhurried creature with a life expectancy of one hundred years. Alas, the bats flew away years ago, and the smaller creatures that fed on their leavings have all but disappeared." - Duncan

•  Shelta Cave Approved For Landmark List
"HUNTSVILLE - Shelta Cave here was one of 13 areas approved by Secretary of the Interior Rogers C. B. Morton for inclusion In the National Registry of Natural Landmarks.
The cavern Is located under heart of old central business district.
The landmark site, owned by the Huntsvllle Grotto of the National Speleological Society, Includes two acres of surface property.
A large underground lake lies deep within the cave, which is noted for its diverse and complex aquatic life, some species of which exist only in Shelta Cave.
There is a wide range of life including various fish, salamanders, shrimp, crayfishes, beetles, and flatworms. Ten species are found there which are not known elsewhere.
The area Is becoming known as one of the world's most important underground ecological laboratories. Well maintained and frequently visited by speleologists, the entrance is protected by sturdy steel gates to prevent unauthorised entry." - Times Daily

•  "Nutrient loss from the loss of gray bats apparently caused a domino effect in Shelta Cave, in Huntsville, Alabama. Shelta had the most diverse cave community known in the southeastern United States, but land development encroached on the cave in the 1960s and the townspeople were concerned about youths entering the cave. The cave harbored a large colony of gray bats. The National Speleological Society purchased the cave in 1957, and they moved their headquarters to a building nearby. They gated the cave in 1968 with the strong, cross-barred gate that had been taken from an old jail. This gate, in hindsight, was inappropriate for bats, which abandoned the cave within two years. Urbanization of the area probably affected the colony too. In 1981 a horizontal-bar, bat-friendly door was put on the gate, but no bats returned to the cave. The loss of bat guano to the lake in the cave probably contributed to the decline of cave crayfishes there. The gate was replaced with a high fence around the area in the early 2000s, and some bats returned." - White & Culver 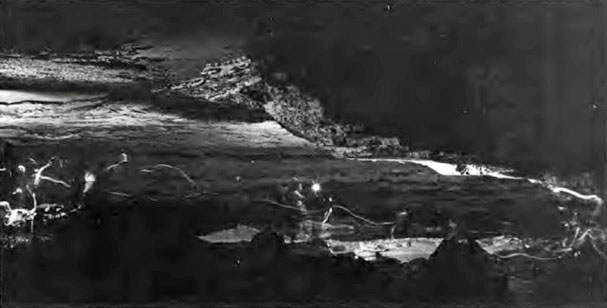 Photo of Shelta Caverns from Dooling. (The Huntsville Times) 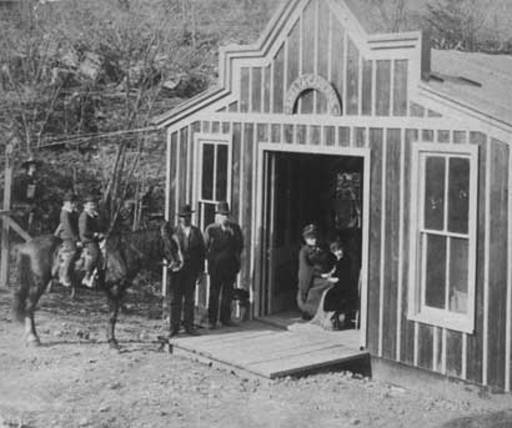 The building over the entrance to Shelta Caverns. (Photo from HMCPL)