Justice of the Peace

•  In the history of St. Mary of the Visitation, his name on the list of people with subscriptions "for purpose of putting slate roof on church, bearing date Aug. 12, 1869." - Tumminello

•  In the 1818 Census is listed as single and it looks as if he is living in a "Keeping House" run by a widow named Susan C. Todd. His occupation is listed as "Justice Of The Peace" - 1880 Census

•  He enlisted in Company D, 9th Alabama Cavalry of the CSA and was severely wounded losing his left arm near Dover, Tennessee in 1863. He was compensated $30 cash. (Retired) After his parole under the penalty of DEATH as a Prisoner of War, Capt. Figg's usual profession of that as a dentist changed to that of a Justice of the Peace in Madison County, Alabama. - Rising Sun Lodge #29

•  As a Justice of the Pease and as a Notary Public, he name is on documents found throughout the internet. - Editor's notes


"Our community will be shocked this morning to learn of the death last night of Capt. Robert W. Figg, of heart failure. He was out yesterday morning, seemingly in his accustomed good health, but was found lying on the floor of his office a few hours later breathing heavily. Dr. A. B. Shelby was summoned and ascertained that he was suffering from heart disease. He lingered during the day, rational during the time, but the flickering light went out at a few minutes to ten o'clock last night.
Capt. Figg was in his seventy-second year. He was born near Petersburg, Va., and came to this State when a youth. He was enjoying a lucrative practice in his profession, Dentistry, at Decatur when war was declared, but closed his office and enlisted in Gen. Forest's regiment. He was Captain of one of Forest's companies when he received the wound, at the second Fort Donelson, that necessitated the amputation of his arm.
Recovering from this wound be returned to the army and served until hostilities ceased. After the war, the loss of his arm preventing further practice at his chosen profession, he located in this city and was elected a Justice of the Peace for this county. This office he continued to hold until the time of his death.
Squire Figg, as he was commonly called, was a man of sterling character and worth, and was conscientious in all his acts and dealings. He was of a quiet and unassuming disposition and very modest and retired in professional duties, but was held in highest esteem by our entire community. His death will cause many a person to remark that a 'good citizen has passed from our midst.'" - The Huntsville Times 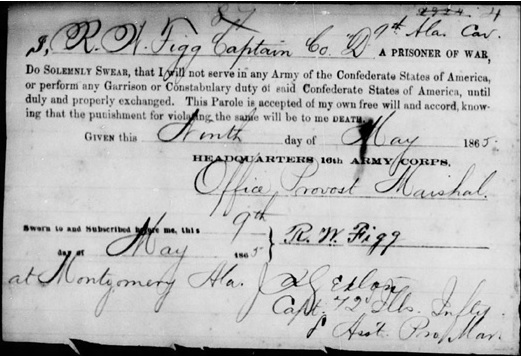