•  Son of Dr. Nathaniel Wilson Floyd (1793-1866) and Elizabeth West Anderson (1802-1883). His mother was born, married, and died in Virginia. His father was born in Louisville KY and died in Madison County, AL, but most of the census records show him in Virginia most of the times between. His father comes from a family with high rankings in politics (a Governor), the military (General), and business. - Ancestry.com

•  Both Capt. John B. Floyd and his wife Frances Maria Harris were "descendants of Orland Jones (1687-1719), a celebrated Colonial lawyer of Virginia who was a son of the Rev. Roland Jones (1650-1688) who was the first rector of Burton Parish Church at Williamsburg, Virginia, which was the Colonial capitol of Virginia. Many prominent people of the South are descendents from the two grand-daughters of Orlando Jones. The eldest, Martha Dandridge, married first Colonel Custis, and second General George Washington. The other grand-daughter, Frances Barbour Jones, married Captain John Jones (no relation of hers), who was a gallant officer in the "light Brigade" of harry Lee, father of Robert E. Lee; and was the great-grandmother of John Buchanan Floyd, and Frances Maria Harris, who married each other." - Davis

•  Married Fances "Fannie H." Maria Harris on Dec. 4, 1867 in Limestone County, AL. "At the handsome and hospitable home of Major John R. Harris, a prominent and popular resident and planter of Limestone County, Alabama, on December 4, 1867, his only daughter, Frances Maria Harris, was united in marriage to Captain John B. Floyd, of Virginia." - Floyd & Ancestry.com

•  Virginia Military Institute - Floyd did not graduate; he attended for six months during the 1856-57 academic year in the class of 1860. - RootsWeb - Stevens

•  John B. Floyd's name was on the written declaration, "representing and stating that they have formed themselves into a body corporate for the purpose of education and improvement of the children of said town of Madison, in the County, and for the creation of an institution known as the "Madison Male and Female Academy Association", to be used solely for school purposes with a capital stock of Eight Hundred and Seventy Five Dollars ($875.00), divided in 36 shares at 250 per share. That said corporation now owns Lots 20 and 21 in the plat in the N.E. 1/4 of Section 17, T-4, R-2 W in the town of Madison; That on the 14th day of July 1885, said stock holders met in said town of Madison and elected the following trustees to wit: W.T. Garner, S. Doolittle, J.W. Burton, W.A. Russell, and G.W. Wise, to serve for the term of one year from that date: It is therefore ordered by the court that said Report be filed and received and a copy thereof duly certified according to law, and that said parties be duly incorporated under S 1994 of the code of 1876, it appearing that they have adopted rules and regulations for their control and management, and are fully organized according to law." "The Madison Male and Female Academy was located near Pension Row. The building was supposedly owned by Captain John B. Floyd, who later closed the school because of the disagreement with the trustees about his daughter's teaching. When this school was closed, children temporarily attended classes in a lawyer Strode's office." - Heritage

•  The "Madison High School" (reported by some to have been the same as the Madison Training School), incorporated in February 1895. The papers of incorporation listed J. B. Floyd as a trustee. - Rankin

•  His brothers were:
Charles Anderson Floyd (1821-1865), "Killed in the repulse of Grant's attack on the right flank of the small remnant of the Army of Northern Virginia (under Gen. Robert F. Lee), only three days before the surrender at Appomattox Courthouse in 1865.
Col. Nathanial Bedford Floyd (born 1826)
Capt. Nicholas Jackson Floyd (born 1828) Owner and editor of the Athens, Alabama newspaper the Herald. - Rankin

•  He was the youngest of four brothers who fought for the Confederacy. While still living in Virginia, he visited his brother, Nicholas Jackson Floyd, near Madison in Limestone County, when the war between the states was starting. Nicholas convinced John to manage his plantation when he joined the CSA. But rather soon, John also joined, leaving his brother's plantation management in the hands of its black foreman. John became a lieutenant in a newly formed company that was a part of the Thirty-fifth Alabama Infantry. The company "distinguished itself at Corinth, Mississippi, where its major was killed. John was given a battlefield promotion to replace the major, but the War Department of the Confederacy refused to move him above those in the normal progression. Instead, a captain was put in the position, and John was transferred to Gen. Joe Wheeler's cavalry.
When Wheeler's force was sent to defend Atlanta during a Southern attack at "Big Shanty," John Floyd was shot from his horse during the last charge against a greatly superior Union force. He received a Minie ball through an ankle, but men of his company rallied around him during intense fire and got him on his horse again. He refused to permit the surgeons to amputate his foot, and he suffered as a cripple for the rest of his life from the injury. His brother, Nicholas, was passing through on other orders and found John in distress, so he changed his travel plans to take John back to the family home in Virginia for the remainder of the war."
After the war John revisited Nicholas' plantation. While there he fell in love was Frances Maria Harris and together, they became active in Madison County community. John served as Mayor of Madison for several terms. In 1896, he promoted the idea of a round house (octagonal in shape, however). "The Madison Roundhouse was built on eight-foot stilts over the town's water supply. The water supply was a cistern dug on railroad property per a deed recorded in July 1894. The location was specified as fifty feet south of the main track and thirty feet west of the western end of the depot. Mayor Floyd painfully ascended the stairs on his injured ankle every day that he went to his office in the Roundhouse, which served as the city hall, mayor's office, and barbershop until 1936." - Rankin

•  "Captain Floyd was a man of many noble qualities and impulses. Kind and generous to a fault, he was not the kind of person, who, with a young and increasing family, could accumulate property during the period immediately succeeding the War between the States, when more than 90 per cent of the people in the South were virtually bankrupt, and most of them were old Confederate soldiers with needy families. He and his noble wife made a happy home for their numerous children, and bestowed upon them every good gift within the bounds of their ability. They are now resting from their labors, and their children are gratefully benefiting from the wise and judicious discharge of their parental duties. Captain Floyd died at his home in Madison, Ala., of heart failure, on Aug. 18, 1902, and his devoted wife tarried only seven years longer." - Floyd 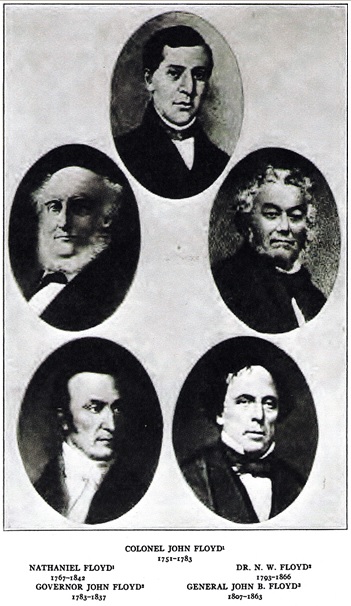 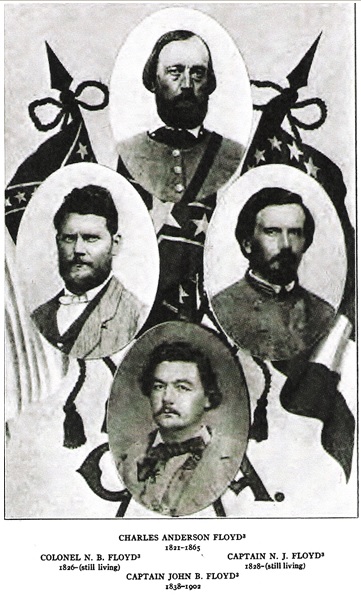 Likenesses of Floyds of Past Generations

Images and excerpt from Floyd.