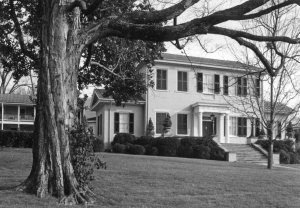 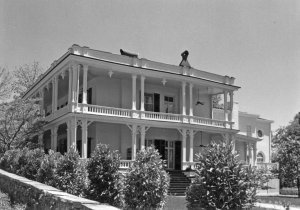 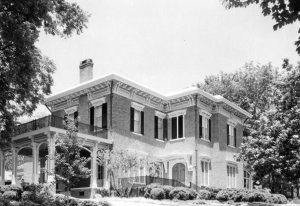 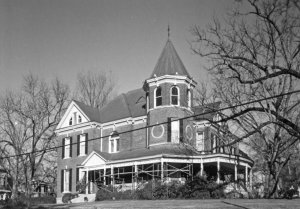 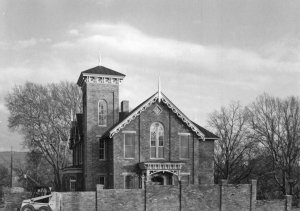 The 1871 Bird's Eye View of Huntsville shows McClung Avenue, then on the outskirts of town, with just four houses (413, 416, 417, and [[Address:424 McClung Avenue SE|424]), all of which remain. There are in 1997 twenty-three houses on McClung Avenue, with the later ones ranging from the 1880s (421) to the 1960s (445). The two earliest houses on the street are the 1834 Greek Revival Leroy Pope Walker house at 413 and the rear portion of the Bradley house (1827) at No. 450. The front rooms of the Bradley house are late 19th century Colonial Revival with a small Ionic-order portico. The McClung house (416) dates from ca. 1838, but its present Italianate wrap-around two-level verandah must date from c. 1851 when James Watkins bought the house and apparently updated it to this latest 1850s style.

The c. 1858 Ward house at 424 had a near-death experience in 1972 when, cut into several makeshift apartments, the roof burned off, leaving the house open to every rain for almost two years until it was roofed to preserve it. The house was fully restored in the early 1990s, including the rebuilding of the missing tower shown in the 1871 View but removed in the 1920s. The details of the tower were patterned after similar ones of the period since at that time no historic photograph could be located. The arched and paired windows and covered barge-boards of the house suggested a mixture of [h ttp://en.wikipedia.org/wiki/Italianate Italianate] and Gothic influences, so the tower was detailed to reflect this, with a top that is primarily [1]. The 1950s boxy west wing (see 1972 photo) was modified to harmonize with the Gothic Revival front gables and a modern carport was removed.

In 1995 after all work was completed, a historic photograph was found in North Carolina that showed that the windows were originally much more elaborate and quite different in design than in the mid-20th century and that the tower had a crenelated top much like the 1859 First Presbyterian Church. The photograph also shows a large western gable almost like the one put back in 1995, with elaborate and large Gothic carved bargeboards on the gable-rakes.

"Ingleside" (1888) at No. 421 is a rare example of the Queen Anne Style done in brick rather than the usual wood. Its Renaissance "bosses" (raised circular wood ornaments) on the verandah gable, "punched" frieze-board at the verandah, bulbous turned columns, and circular stone inset at the brick tower all show the influence, freely manipulated, of Renaissance England.

The 1871 View of Huntsville shows a tall central tower at the house at 1867 Patton house at 417. Perhaps in the late 19th century the tower was shorn off and other changes made to give the house its present but cohesive Italianate design. The portecochere on the west side must also be a late 19th or even early 20th century feature, but it blends perfectly with the rest of the house. This appears to be a fairly drastic 19th century remodeling and is architecturally successful.

No. 418 and No. 420 are two good 19-teens examples of free-wheeling Colonial Revival, and may be by the same architect. Clearly the architect was not inclined to be archaeologically correct in his versions of 18th century "Colonial." The basic historic revival elements are these: clapboards, boxy shape, Ionic "Scamozzi" columns and pilaster caps, late-Georgian corner pilasters, dentiled-cornices, "Palladian" type dormers and fanlighted entries. But the proportions of the elements are wildly different from their 18th century ancestors. The clapboards are one-half as wide, the cornices are five times as wide, and the dentils are enormous, as are the Ionic "Scamozzi" pilaster caps at No. 418. These excellent houses are inspired by but not hamstrung by their historic models.

The original architect's blueprints for No. [[Address:425 McClung Avenue SE|425], another early 20th century Colonial Revival house, show the portico roof pitch to be half as steep as built, as would be both correct and attractive. Apparently the builder assumed the architect had made a "mistake" in showing the portico roof at a shallower pitch than the rest of the house. Too bad.

No. 427 was built in the mid-20th century, apparently without any architectural guidance. No. 436 is a late Victorian period house completely remodeled in the early 20th century by its successful author-owner into an excellent Craftsman Style house. The original architect's remodeling blueprints show heavy masonry piers at the portico to match those at the porte-cochere, but there are instead too-delicate Tuscan colonettes supporting the robust "Craftsman" portico roof The extended rafter-ends at the main roof eaves give a pleasing flashing 1-1-1 rhythm in the sunlight.

No. 445, built in the 1960s, is the newest Tudor Style house in the District and the newest house on McClung Avenue. A watered-down Tudor style is the most common type in 1985-97 speculative houses and custom-house subdivisions around the city.

The 1920s twin bungalows at 446 and 448 are good examples of small houses infilled on previously large vacant sites. The two bungalows are built on a single lot shown on the 1861 map, which lot is in turn a subdivision of the large Leroy Pope estate. The bungalows exhibit the charm and hominess of the type, their brick-walled terraces by front porches being an unusual feature that is similar to those in Prairie Style houses of the early 20th century. 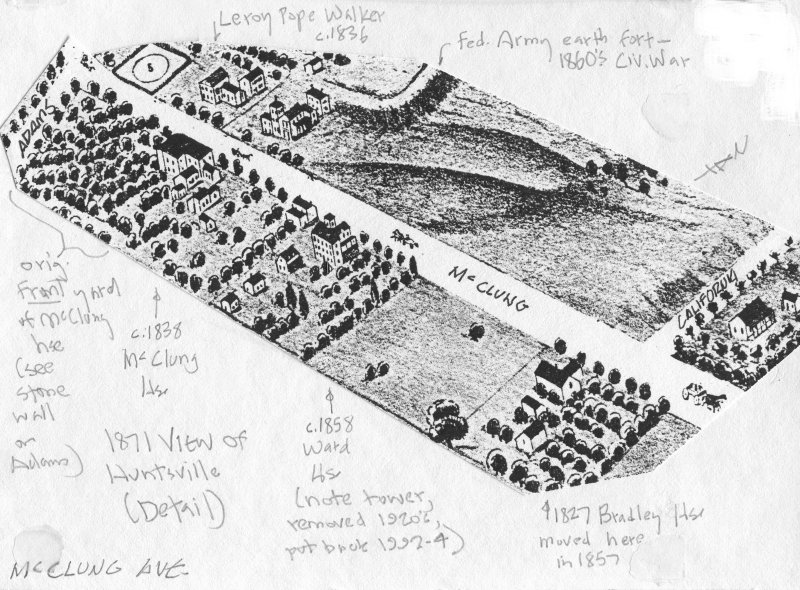