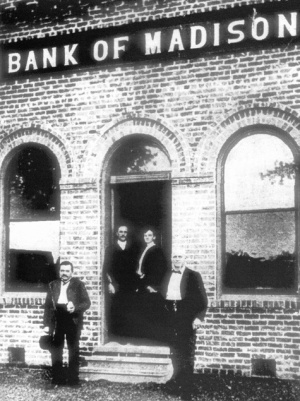 Most people who are aware of the history of Madison have seen a photo of Harvey Anderson standing with John Winston Burton and the Hagers in front of the Bank of Madison in the early 1900s. The photo is shown on page 119 of the city’s sesquicentennial book, “Memories of Madison: A Connected Community, 1857-2007." Harvey was an impressive figure, looking very prosperous and confident, as a banker of that time should. Obviously, he was one of the stalwarts of the town of his day. The thing people may not know is that he was a son of what Southerners called a “carpetbagger”. Anderson at about age 9 came to the Madison area with his family around 1868. He was born in Ohio to John B. Anderson, who was himself born in Pennsylvania, but both of John’s parents were born in Ireland. There are three service records for the name John B. Anderson in Ohio infantry units during the Civil War – the 167th, the 179th, and the 181st regiments.

John’s wife (Harvey’s mother) was Amanda, born in Ohio. Her father was born in Virginia, and her mother was born in Maryland, so the family had roots in both the north and the south. Harvey had brothers James, Charles, William, John, and DeWitt. His sisters were Jenny C. and Alice. All of the siblings were born in Ohio except DeWitt, who was born in Alabama in 1874. While there is no marriage recorded in Madison County for Harvey and his wife Annie R. Hertzler, it is known from census records that they were both raised to adulthood in Madison County and married in 1888. They had three children born to them, but only two survived to adulthood. Harvey Gordon Anderson was born in 1897 in Madison. His sister Annie H. was born in 1889 and married an Apperson, living in Nashville by the 1930s. Gordon lived in Huntsville on Locust Street, and in the 1930 census his father and mother were living nearby on the same street. At that time Harvey was 71 years old, with his occupation listed as manager of a farm. The 1920 census listed Harvey and his wife Annie living in Madison with no occupation, showing him as retired at age 55 (per the enumerator’s notations), even though he was actually 61 then.

Harvey’s last will and testament was filed for probate by his son Gordon on January 25, 1934, showing a death date of January 21 that year. Harvey passed away at his home in Huntsville, but his legacy was in Madison. He left a farm of 1280 acres in Limestone County to Gordon, while he bequeathed property and cash amounting to $18,000 to his daughter Annie Apperson. The balance of his estate passed to his widow Annie R. Hertzler Anderson. Harvey apparently managed well through the depths of the Great Depression.

The first record of Harvey’s life in Madison was the 1889 purchase of a lot in the town. However, in 1904 another purchase from James P. Ashford for Lots 23 and 24 was recorded (that actual purchase probably occurred earlier, but the records were not filed until 1904). It was on these lots that his impressive house was constructed in 1897, according to Historical Society files. The large house was the subject of picture postcards sold to show Madison’s best face, and the house at 17 Front Street is now owned by Tony and Cindy Sensenberger, who extensively restored it. There was even a photo of the house in the December 17, 1913 issue of the Weekly Mercury newspaper special edition about the town’s history. That same issue of the paper described Harvey Anderson as a Director of the Bank of Madison, but the Alabama Mercantile book of 1905 shows that he was a partner in the general store of Anderson – Bronaugh & Co. It is additionally known that he was a partner with his brother-in-law Frank G. Hertzler in a hardware store on Main Street. His father’s carpetbaggery not withstanding, Harvey Anderson and his wife Annie Hertzler indelibly left their mark as prominent citizens of the town of Madison.