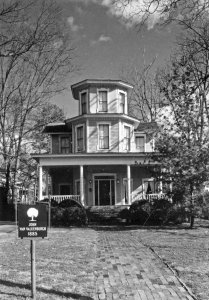 Lowe Avenue did not exist in 1972, but was built just after the Twickenham District was created. Of the portion in the District there is just one historic house, the 1885 Van Valkenburgh house, popularly known as the Steamboat Gothic house. The original location of the house was on the west side of Franklin Street about 100 feet north of Williams Avenue. In 1973 a bank bought the site and planned to demolish the empty house for a driveway to their proposed bank on Williams Avenue. Upon learning of this fate, the Federated Women's Clubs of Huntsville determined to save this unusual house. They obtained permission from the bank to move the house, purchased an empty lot beside the new Lowe Avenue and proceeded to move it. The mover, upon getting the house on wheels and out into the middle of Franklin Street, realized that it was much taller than he thought and that many fine shade trees on Franklin Street would have to be severely trimmed to transport the house down his planned route to Lowe Avenue. The prospect of this heavy tree-trimming was firmly rejected by the District residents and thus the house sat in the middle of Franklin Street for several tense days. Finally the mover realized he could more easily take the long way around and move the house west along Williams Avenue to the northwest end of Lowe Avenue and thence east again to the new site, avoiding nearly all shade trees.

The house was moved without further difficulty and restored for use by the Women's Clubs and for receptions, etc. In the early 1990s the house returned to use as a private residence, a happy ending to a precarious situation.

An 1886 photograph shows the VanValkenburgh house with elaborate crestings, brackets, multi-color trim, and a semi-octagonal verandah, all gone by the mid-20th century. The present rectangular verandah with Tuscan columns appears to date from the early 20th century.