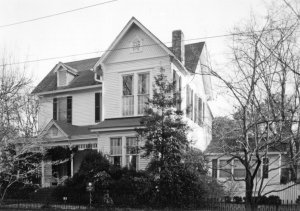 Locust Avenue is primarily a street of late 19th and early 20th century houses. The 1861 map shows just one house, No. 412, which still exists in remodeled and enlarged form. No. 414 is an attractive and intact late 19th century house that combines features of Eastlake (spindles) and Italianate (paired windows and bays). It has dormer windows at the attic, an unusual feature for Victorian houses.

No. 423 is an unusual late Victorian example with three large symmetrical gables across the entire front, with the center gable being the smallest. The absence of scrollsawn trim or spindles seems to indicate turn-of-the-century or early 20th century construction when such elaborations began to lose favor. It is also possible that it had such features which were later removed. In any case, the result is a simple and homey charm.

Another late Victorian example is No. 433, again lacking any elaborate trim and with what appears to be a 1920s bungalow verandah. In this rare case the later verandah is a positive rather than a clashing addition.

In 1972, No. 427 consisted of a late Victorian house with a clashing bungalow verandah and screened porch. In the 1980s the verandah was reconstructed in a harmonious Victorian fashion.

No. 413 is an early 20th century Colonial Revival house with the wide eaves of the Prairie Style. In the 1980s a comparison of the original architect's blueprints with the awkward entry shelter showed that the shelter had not been built per the architect's design. This was corrected.

No. 415 is a more literal rendering of the Colonial Revival style. Like most houses in the District, it has a sizeable late 20th century addition in the rear.

The newest house on Locust Avenue is No. 408, a low, wide steep-roofed Ranch Style Ranch-Colonial built in the 1960s.

Locust Avenue contains several examples of the 1920s bungalow and craftsman styles. No. 418 has a dramatic clear-span front porch of perhaps 40 feet without columns. No. 422's porch has four round and tapered Tuscan columns which are probably original. Some of the early "bungalow books" such as Gustav Stickley's Craftsman Homes periodical illustrated such houses as sometimes having Tuscan columns.

The tall "Colonial" dormers on the c. 1920s bungalow at No. 417 appeared without the required review of the Historic Commission.

In about 1990, No. 413 and No. 425 were requested to be demolished to make a street to a proposed subdivision in the several open acres in the center of the large block north of Locust Avenue. Concerted efforts by the neighborhood residents and the Historic Commission saved the houses. Such constant vigilance is necessary in any historic district.