Lawrence B. Goldsmith, Sr. and His Hollytree Camp Archive

Lawrence B. Goldsmith, Sr. and His Hollytree Camp Archive 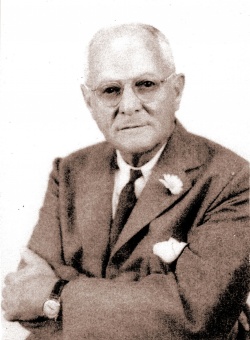 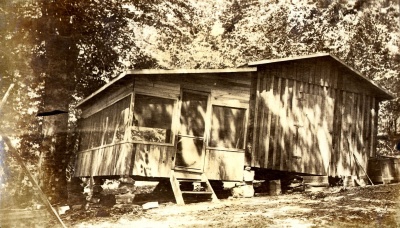 The idea for a fishing and gaming camp began during the years prior to 1923 when Hollytree Camp became a formal organization. During the early 1920’s several men from Huntsville including my grandfather, Lawrence B. Goldsmith, Sr. fished together on the Paint Rock river, a tributary of the Tennessee River. As time went by they decided to find some land to rent so they could extend their fishing trips to several days by camping on the banks of the river and playing poker during the evenings. Knowing my grandfather, I would assume that it was his idea. He along with the other men then organized a club with various legal forms that allowed for twelve members and included a number of rules for the camp. The organizational group numbered ten, made up of the fellows who had been fishing along the river and several of their closest friends who were willing to contribute to the organization. Lawrence volunteered to keep the records along with the start up funds and had the legal work done since he liked to do that sort of thing. Likely Lawrence also found the land and rented it from the Putman family. The Putmans had a suitable site that included a water source, a spring up the hill from the purposed camp. Being used to land records and how to research ownership of the land from his business interests, Lawrence would have been the one to find the location and deal with the land owners. If he could persuade a group to invest in a grand hotel in Huntsville (the Russel Erskine), during the 1920’s he would have had the ability to persuade a similar group to invest in a gentleman’s camp. He also had the ability to persuade a family of mountaineers to lease to the camp group. Lawrence would have been the one too to have made friends with the local sheriff making make sure “the boys” wouldn’t have any problems with their gambling and “occasional imbibing” from the authorities. Lawrence was persistent, tenacious you might say, in all his endeavors. The camp was called Hollytree after the town of Hollytree in northern Alabama where the camp was located.

Between 1923 and 1957 my grandfather ran Hollytree. He was secretary and treasurer by title. However, he did everything that had to do with the camp with some help from the other members. The fellows began meeting during the Fourth of July week. They set up tents, fished and played poker. The idea of taking money from the KITTY provided a way to pay for the expenses. Lawrence liked to build funds for whatever organization he was involved with and so he began to accumulate from the KITTY and eventually had enough to build structures. Through the years as many as forty men spent their July fourth vacation at Hollytree , fishing, playing poker and enjoying other forms of gambling. It became a much sought after place to be invited as a guest. People came not only from Huntsville but also from other towns and cities around the country. From 1923 until 1957, the last year the camp held its July 4th weekend party, my grandfather arranged for the supplies and the running of the camp, including bringing waiters from the Russel Erskine to cook, serve and take care of other household duties.

After examining some of my personal papers regarding Hollytree’s last years, I believe that some of the factors that led to the closing of Hollytree were the declining health of my grandmother in 1955 when she was diagnosed with cancer, and my grandfather’s prostrate surgery in 1957. He was seventy four years old in 1957 and camp just took too much energy for him to continue the duties he had assumed over the years. No one wanted to take over, the members were aging also, and so it would have been late in the game for any of the other members to learn how to plan the weeklong parties. An opportunity arose; Bill Henson wanted Hollytree for his family. This provided an opportunity to transfer the existing lease that would not terminate for a few years. Also it was an opportunity to sell all the equipment etc. LBG was wise enough not to pass up this opportunity. Lastly, I think that Hollytree had just run its course.

The Henson family kept the camp going for their personal use for around five years or so. Their children grew older and perhaps they found it difficult to deal with the Putmans. In any event, the Henson family did not continue to lease the land and so it reverted to the Putmans. It has been occupied through the years by different groups including some hippies, a religious group and others. Eventually the land passed from the Putmans and today (2014) is owned by Willard McLennan. Willard is a recluse and does not want trespassers. He has been known to be threatening and so it is recommended not to venture near the site.

My grandfather’s records including grocery lists, records of those who won a lost at all the games (including the “KITTY”S “ take) , letters and other correspondences from members and guests were given by our family to the Huntsville Madison County Public Library. They make up a sizable archive that has been reviewed and written about by local historian Paul Hays in 2014. Paul’s book, “Hollytree’ has been published and copies are available at the Library, UAH, and other museums and libraries around the country where our family has contributed its artifacts and archives.