At least two families from Ohio and Pennsylvania who arrived just after the Civil War became prominent citizens of Madison. Bank director Harvey Anderson came here with his family from Ohio around the age of 10. When he reached adulthood, he married Annie R. Hertzler, a daughter of John Hertzler. John and his wife Annie G. Hertzler came from Ohio in 1869-70, but they were both born in Pennsylvania around 1830. They had 7 children, all born in Ohio: Jacob (1853), Mary J. (1856), Frank G. (1858), Annie R. (1859), John Jr. (1863), Fannie (1866), and Daniel (1869). The Hertzler family purchased land in Sections 25, 26, 35, and 36 of Township 4, Range 2 West. Their land is now part of Redstone Arsenal, lying along both sides of Indian Creek and adjoining land owned by Jim Williams, another prominent early Madison citizen. The Hertzler land was located immediately south of today’s airfield on the arsenal, extending westward across Anderson Road to Zierdt Road. Some of this land had been owned by Eldred Rawlins, a Lanier son-in-law. Other portions of the land were in the Lipscomb plantation area, where Madison educator John Lipscomb was raised.

John Hertzler was recorded as being a doctor in several public records, but in each census he was always reported as being a farmer. He constructed a large farmhouse on his arsenal lands, as shown in photos from a 1908 publication of the Business Men’s League of Huntsville. Those photos, along with his unusual barn, are included in a book by Beverly Curry entitled “The People Who Lived on the Land that is Now Redstone Arsenal”. This book, written in December of 2006, is not yet available to the public, but it is expected to soon be printed and released. 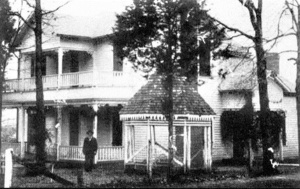 The impressive two-story house on the arsenal was rivaled by an equally elaborate house that Dr. John owned in the town of Madison on the southwest corner of the intersection of Church Street with College Street. Photos of that house are shown on page 98 of the Madison sesquicentennial book, “Memories of Madison: A Connected Community, 1857-2007”, which is available at various outlets along Madison’s Main Street. Dr. Hertzler and several of his children, along with other early Madison residents, are included in the photos. However, this was not the only Hertzler house in the town. Dr. John’s son Frank constructed another impressive structure at 25 Front Street, today owned by Dennis and Joyce Vaughn. Frank’s house was one of those photographed in the early 1900s and used on postcards to showcase the town. Frank married Henrietta Sullivan, a daughter of Dr. George R. Sullivan of Madison. Like his brother-in-law Harvey Anderson, Frank was a director of the Bank of Madison. Frank and Harvey were partners in a general store, and Frank was separately a partner with George Washington Wise in a dry goods store. Yet, it was Frank’s sister Annie who married Harvey Anderson that had one of the most elaborate houses in the town of their day. That house was located at 17 Front Street, today the residence of Tony and Cindy Sensenberger, the owner-operators of Madison’s Main Street Café.

In spite of having a successful farmer-doctor for a father, several of Dr. John’s children died young. The 1910 census showed that two of the seven children had died by then, and John Jr. died of tuberculosis on January 3, 1913, having married “Lula” in 1908. She had Ohio roots also. Daniel died before 1918, when the estate of Dr. John was probated. Daniel left a widow named Ida with a 2-year old child, per the 1918 probate papers. Later census records showed Ida remaining single and living on Deloney Street (became Arnett Street) in Madison, but today there are no Hertzlers listed in Madison or Huntsville telephone directories. Yet, the family’s legacy continues with two of their houses still standing proudly in Madison at 17 and 25 Front Street.