A Biography by James Randolph White

Huntsville Alabama, May 2018
Published in the Huntsville History Collection, Mat 2018

Note: You can download a PDF of this article. 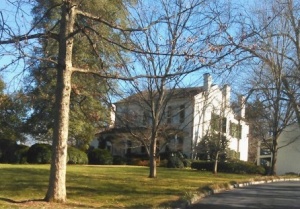 James Bradley White was born in Huntsville Alabama on a winter day in February 1845, the third of twelve children of Thomas Wilson White and Susan Bradley White. His paternal grandfather was James White of Abingdon, VA and his maternal great grandfather was Alabama’s 2ed Governor Thomas Bibb.

James’ father Thomas purchased his Eustis Avenue home circa 1844. This family home is located in Huntsville’s Twickenham Historic District on a hillside overlooking the southwest corner of Eustis Avenue and White Street. The house was built in 1836. Thomas added a side wing and detached slave buildings to the rear. He would need the extra room because a dozen children would arrive over the next 24 years.

James Bradley White was born a child of Alabama’s pre civil war antebellum aristocracy planter class. The family had 12 children, 6 boys and 6 girls. James and his 11 siblings were born and grew up in the Eustis Avenue home. James, Alexandria (Sandy) and William, the oldest sons, each fought in the Civil War. 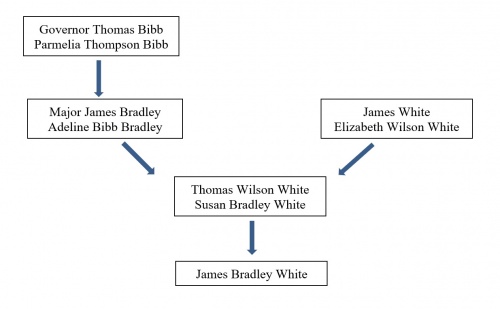 James certainly had a venerable and distinguished Southern pedigree. As a boy growing up in Huntsville he had many Bibb and White family members living near him in the small town. Both families had large operating cotton plantations in North Alabama. Like Huntsville boys his age James would have attended grade school in Huntsville at the Green Academy on Clinton Street only a few blocks from his home. This was the first institution of its character to be charted in the Alabama Territory. Green Academy was chartered in 1812 and was prominent in training leaders of North Alabama. James was part of a loving southern family who were members of the Episcopal Church of the Nativity.

From a young age he became an accomplished horseman. Like many families the Whites had a stable on the home property. Transportation was by carriage, horseback or on foot. The White boys grew up riding horses on the dusty streets of Huntsville and swimming Big Spring. They visited the three White plantations at Bellefonte, Whitesburg and Limestone County on horseback with their father. James’ experience as a horseman would serve him well in a few short years.

James’ childhood was cut short at age sixteen when war called. He and his two brothers left their Eustis Avenue home to fight for the South. During the Union occupation of Huntsville, when their mother Susan White was confronted by Union soldiers at her home who demanded to know where her three sons were, her reply was “they are in Virginia fighting for the South and I wish I had 37 more like them”. Mrs. White wrote a diary over many years, that provides interesting information about the White family and life in Huntsville during and after reconstruction. One can only imagine the tearful departure when these three boys left home for war, and their mother’s anguish not knowing from day to day if they were alive or dead.

James’ childhood experience on a horse served him well in General Humes’ Confederate Cavalry Brigade as part of Major General. Joseph Wheeler's elite Cavalry Corps. As a boy he found himself far from home and family, in the saddle, riding and fighting with the best.

James was with this regiment two years, participating in the first battle of Manassas (Bull Run) where Captain Lewis E. Lindsay and 37 enlisted men were killed, Colonel Jones was mortally wounded and Major Charles L. Scott and 206 other men were wounded out of 750 engaged.

From General Beauregard’s official report of this battle: “The 4th Alabama suffered severely from the deadly fire of the thousands of muskets which they so dauntlessly confronted under the immediate leadership of Bee himself. Its brave colonel (E. J. Jones) was dangerously wounded and many gallant officers fell, slain or hors de combat. It was now that General Johnston impressively and gallantly charged to the front with the colors of the Fourth Alabama by his side, all the field officers of the regiment having been previously disabled. The brave Bee was mortally wounded at the head of the Fourth Alabama”. James fought in the battles of Williamsburg, Yorktown, the entire peninsular campaign, Seven Pines, where he was slightly wounded, and the Seven Days Fight around Richmond. He was transferred after the second battle of Manassas to Mobile, and promoted to sergeant of artillery. 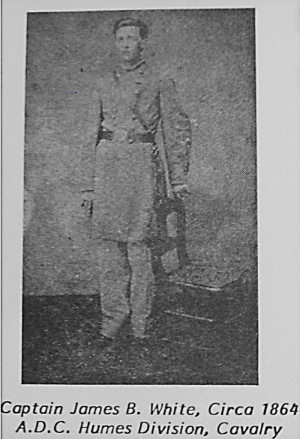 He was commissioned a lieutenant and was assigned to General Humes' Cavalry Brigade, serving upon his commander's staff until the end of the war. James was the first cousin of, and the aide-de-camp to General Humes. Humes was from Abingdon, VA. James’ grandfather,

James White (1770 – 1838), was the founder of the town of Whitesburg, AL and a resident of Abingdon, VA. James White was the maternal grandfather General Humes.

James Bradley White was in the battles of New Hope Church and Resacca. At Resacca 2,600 Southern men died and James was again wounded. He fought at Kenesaw Mountain, Peach Tree Creek and the Atlanta campaign. He was on the front line fighting against General Sherman to oppose Sherman's dreadful and destructive March to the Sea. He was part of Wheeler's raid through Tennessee,

He was taken prisoner near Macon, in 1864, but escaped after three week's confinement, and joined his command in South Carolina. In January, 1865, he was promoted to the rank of captain, in the provisional army. At the battle of Fayetteville, N. C., James’ commander and cousin General Humes, who was 14 years his senior, was severely wounded. James carried General Humes from the field of battle to Raleigh and remained with him until General Johnson surrendered, truly a gallant record for a young soldier only 20 years of age.

Four years of continuous fighting. Could any Confederate soldier have seen more war?

From General Joe Wheeler’s farewell address to his cavalry: "You are the sole victors of more than two hundred severely contested fields; you have participated in more than a thousand conflicts of arms; you are heroes, veterans, patriots; the bones of your comrades mark the battlefields upon the soil of Kentucky, Tennessee, Virginia, North Carolina, South Carolina, Georgia, Alabama and Mississippi; you have done all that human exertion could accomplish."

Alexander White, 19, was still recovering from wounds he received in Virginia. He was reported to be on crutches in October the year before. Both he and his younger brother, James, were in Co. F, 4th Alabama Infantry. Later James was wounded and as a prisoner in 1864 managed to escape. Their brother, W. Y. C. White, also served in the Confederate army. The youngest of the White boys at home, Addison, Frank, and Thomas, were paid by the Federals to transport bricks

Upon his return to Huntsville James found that the town of Whitesburg had been burned by Union forces. Whitesburg was never rebuilt. Likewise the town of Bellefonte in Jackson County, where the White family owned a plantation, was burned and destroyed by the Yankees, and never rebuilt.

The Green Academy had also been burned. Huntsville had changed but had survived better than most Southern towns because of the Union occupation. The Yankees did not burn Huntsville because they arrogated and occupied the town. Private homes were taken to quarter soldiers. Private property, livestock and foodstuffs were confiscated and crops were destroyed. Civil law had all but been eliminated during the war and the populace was at the mercy of whichever commanding Union officer controlled Huntsville at the time.

James wasted no time in starting a family. Home only a year, in 1866 James married Miss Susan (Susie) Clay Withers (1845 – 1893), of old and reputed ancestors. Over a 10 year period they became the proud parents of five children, and were members of the Episcopal Church. James was a member of the Masonic, K. of P. and K. of H. fraternities, and of the Order of Railroad Conductors.

James had a career with the Memphis Charleston Railroad. He rose from the position of brakeman, to that of a freight and subsequently passenger conductor, and in 1876 became the company's agent in the Law and Stock Department. He and his five brothers inherited property on both sides of the Tennessee River, upon their father’s death in 1890. James operated this farm until his death.

Madison County census records give us insight into James and his family over the years: 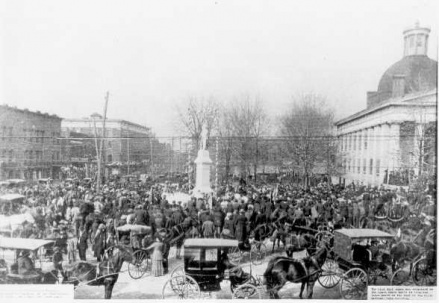 The United Daughters of the Confederacy (UDC) erected a statue to honor Confederate Soldiers at the Madison County Courthouse in Huntsville in November 1905. James, his brothers and family undoubtedly attended this event along with the majority of county residents. James and other veterans would have been recognized and honored. The inscription on this statue reads: 1861 – 1865, In memory of the heroes who fell in defense of the principles which gave birth to the Confederate Cause.

The handsome monument was dedicated to the Confederate dead by UDC and was unveiled with proper ceremonies in which many veterans of North Alabama participated. The unveiling of the Confederate monument attracted the largest gathering of veterans that had been seen here since the reunion of 1891.

The monument depicted a Confederate private with his musket at parade rest. The complete statue of Vermont marble stands over twenty-four feet high and cost $3,000. The statue was designed by Mr. Frederick Hummel, a local artist, and Mr. Jim Mott Robinson posed for the sculpture.

James Bradley White saw much death during his time. He had happiness from his friends, church and the blessing of an extended large family in Huntsville. He experienced sadness having buried 2 children and seeing his devoted wife Susie pass at the age of 48. James operated his Whitesburg farm for many years and owned and operated the Tennessee River ferry at Whitesburg with his siblings. This farm was one of the original plantations founded his grandfather James Whit in the early 19th century. James Bradley White lived his last years on this farm at Whitesburg.

A Confederate Veteran Laid to Rest 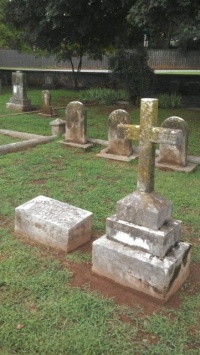 In 1911 James died at 66 years of age. His funeral and burial at Maple Hill Cemetery must have been well attended considering the large number of extended White family in Huntsville at the time (11 siblings and 6 first cousins along with their families). The Stars and Bars most certainly would have been flown at his large graveside service. And Masonic funeral rites would possibly have been conducted.

James died on a November day 50 years and 7 months after he answered the call to war. James, his wife Susie and their children are interred at Maple Hill Cemetery

You can visit Mr. James Bradley White and his family at Maple Hill Cemetery. His grave is approximately 150 feet south of the cemetery office. Look for his name on the west curb marking this family lot.

James Bradley White – A Huntsville Alabama boy who answered the call to war at age 16.

Authors Note: While James Bradley White went to war at a remarkable young age there were boys even younger who fought.

Huntsville claims the youngest Confederate veteran in the country. He was John W. Mayhall, who at the age of 14 years 4 months and 7 days enlisted in Company H. Captain Gales, Twelfth Alabama Infantry on March 18, 1861. On the same day he and the command two which he belonged left Decatur for Richmond,

Mayhall along with James Bradley White was at the first Battle of Manassas. Mayhall fought at the siege of Yorktown, Battle of Williamsburg, Seven Pines, Malvern Hill, the second battle of Manassas, South Mountain, and Sharpsburg. He was three times slightly wounded. Availing himself of all opportunity for a furlough. Mayhall got a leave of absence and after a few weeks re-enlisted in Wheeler's Twelfth Alabama Cavalry and followed Sherman in his march to the sea. After participating in several battles Mayhall surrendered with the Twelfth at Greensboro, April 1865.