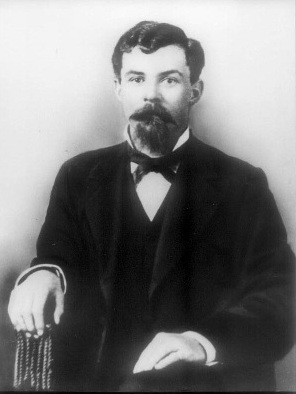 James Albert Watkins was a trustee of Madison high school when it was incorporated in 1895. He was initially a clerk in the store of his father-in-law, George Washington Wise. By his first wife, Emma Pride (daughter of James Harvey Pride and Amanda Butler), James Watkins had three children. Emma died after five years of marriage. She and her last-born child both died in 1886. Two years after the death of Emma, James married Mattie Caruthers Martin, who lived to age 96. Mattie is buried in the old section of the Madison City Cemetery beside her husband. Her father was George Washington Martin, the first lot and store owner in Madison. Her mother was Nancy Leeman from Yazoo City, Mississippi.

James Albert Watkins served as County Commissioner of District 5, Precinct 8 from 1900-1907. He would no doubt have served longer, but he died in office. His life, however, illustrates the changes that the Civil War made in the Southern society. In the census of 1860, he lived with his parents. After the war, the 1870 census revealed that he and his brother were living in a household headed by a blacksmith named Querlan Smith. In the census of 1880, however, James A. Watkins was listed as living in a household headed by a black man named Moses Moore. James' occupation was listed in that census as “Manages Farm.” Since the farm was owned by the black family, there was a reversal of traditional roles from before the war.

The Watkins line in America included another James Watkins who accompanied John Smith in 1608 on his travels through Virginia, when Captain Smith was rescued from death by Chickahominy Indian Princess Pocahontas. An ancestral relative of James Albert Watkins, Dr. John Watkins, was a member of first Alabama State Constitutional Convention in Huntsville in 1819. James was linked by marriage to William Bankhead, U.S. Congressman of Alabama and father of Tallulah Bankhead, a famous movie actress who was born in Huntsville. William Bankhead was a great-grandson of Thomas Jefferson, our nation’s third President.

James Watkins was also connected by marriage to the family of Susannah Claiborne Withers, who was the wife of Clement Comer Clay, eighth governor of the state. He was likewise connected to Joseph Watkins of Georgia, who at age 20 invented an operable cotton gin that got the attention of Eli Whitney. Eli came to inspect the machine and figured out some improvements. Eli Whitney thereafter became recognized as the inventor. Joseph was exhorted by his neighbors and family to take Eli to court, but he was content to just keep on farming. The Madison Watkins family links to other notables in north Alabama included the surnames of Bibb, Pope, Walker, Clay, Hundley, Hughes, Lanier, and Spencer. One the daughters of James A. Watkins by Martha Caruthers Martin married Joel Lee Brewer, who became Mayor of Madison. A grandson of the Brewers is Brian Hilson, current president and CEO of the Huntsville-Madison County Chamber of Commerce. It would seem that the Madison Watkins family had a wide range of influences in Alabama society, both past and present.