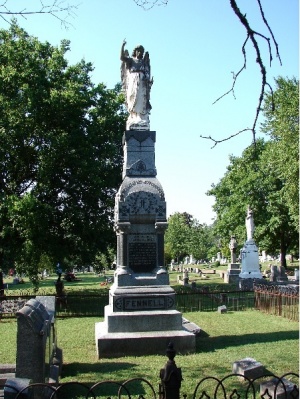 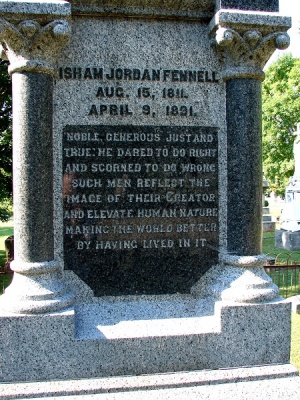 His monument in Huntsville’s Maple Hill Cemetery shows that Isham Jordan Fennell was born on August 15, 1811. It records that he died April 9, 1891. It implies, due to its enormous size and design plus the prominent location within the cemetery, that he was one of the area’s wealthiest men during his lifetime. Denoting high esteemed, the epitaph states “Noble, generous, just and true; he dared to do right and scorned to do wrong. Such men reflect the image of their creator and elevate human nature, making the world better by having lived in it.” A full-page photograph of the monument is in Madison’s sesquicentennial book Memories of Madison: A Connected Community, 1857-2007, available at Main Street Café and Hale Fire Glass on Main Street.

Fennell was son of a senior Isham Fennell of Madison County, who married Temperance Jordan, a daughter of American Revolutionary War soldier Bartholomew Jordan. The junior Isham Fennell married Martha Jordan, whose relationship to Bartholomew is unknown. It is known, however, that the Fennell family wealth involved successful operation of large cotton plantations during the days of slavery. The 1840 census showed that widow Temperance Jordan Fennell had 59 slaves. When she died in 1844, ownership of one quarter of these slaves passed to her son Isham, since she had four living children at the time her estate was probated. The 1850 census showed that her son Isham Fennell of Madison County had 64 slaves. Another Isham Fennell of Marshall County had 34 slaves in 1850. The Marshall County Isham was a first cousin of the younger of the two Madison County Ishams. They shared as a common grandfather yet another Isham Fennell, who married Charity Clark. In 1860 the Madison County Isham was enumerated in the Madison Station Post Office area (which included parts of today’s Research Park and northern portions of Redstone Arsenal), when he had 74 slaves. Of course, by the time of the 1870 census there were no longer any slaves in the southern states.

The ancestry of the Fennell families of this area has been documented through the Isham who married Charity Clark back to Jean (“John”) Victor Jules Fennell of France. The French ancestor was born around 1648 in Lyons and died about 1710 in New York. His son John Fennell was born about 1678 in France, married Annie Watkins, and died about 1717 in Virginia. He had a son named Nicholas who had a son named John, who died in South Carolina and was the father of the Isham that married Charity Clark. This first Isham had a son James Clark Fennell who married Elizabeth Hobbs in 1803 in Virginia. It was their son Isham Hobbs Fennell who lived near Warrenton in Marshall County, Alabama.

Another son of James Clark Fennell was James Watkins Fennell, who married Martha Matilda Allison. She was born in Ireland and connected to several Madison County pioneer families by marriages. James and Matilda had a son Cains (sometimes the handwriting is interpreted as “Caius”) G. Fennell, who was a prominent early citizen of the town of Madison. Cains was born in Marshall County in 1847 and married Martha Foster. He was one of the men who incorporated Madison High School in 1895, and he entered into land transactions with Madison pioneers George Washington Martin, J. C. Broyles, and Samuel Bailey.

Other connections of the Fennell family with area pioneers are seen in the marriage of William Fennell to Angelina Peete and of Kezia Fennell to John Hobbs. Both of these Fennells were children of Isham and Charity Clark Fennell. Additionally, George Fennell married Temperance Lanford, and Charlotte Fennell married William Lanford in Madison County. These last two Fennells were siblings of Isham Jordan Fennell, children of Temperance Jordan Fennell. About 1851 William Lanford built the Lanford-Slaughter House, just east of Indian Creek and north of Old Madison Pike. The Jordan, Lanford, and Fennell families were extensively involved in common church and land transactions, owning many acres between Huntsville and Madison along the northern boundary of today’s arsenal during pioneer times.