Note: You can also download a PDF of this article.

Before Alabama was a state, when the Tennessee River ran wild and free, frontier industrialist James White of Abingdon, VA pushed into the Tennessee Valley and established a successful chain of mercantile stores in river towns that may have been the first large retail store chain in America. He acquitted large tracks of land and operated plantations in Jackson, Madison, Morgan and Limestone counties. 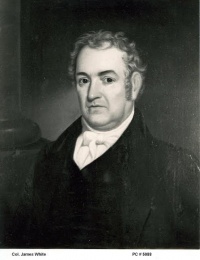 As a young 17 year old James White left his home in Carlisle, Pennsylvania and worked in Baltimore, America’s leading seaport. There he learned the business of mercantile, shipping, commerce and trade. America was moving west and White relocated to Abingdon, VA, the most western town in Virginia on the edge of the frontier, located on the “Great Road”. He married and started his family and business in Abingdon where his home stands today next to the Washington County, VA Courthouse. He built and operated a gristmill and sold necessities to pioneer families traveling west. White looked to the Tennessee Valley and saw tremendous business potential.

Salt was a commodity in great demand in the American frontier. Salt was required for the preservation of meat and leather tanning and therefore was a vital and indispensable to all frontier families. Circa 1802 James White began producing salt near the present town of Saltville, VA. White’s salt production operations were in proximity to the Holston River in Virginia. At that time America’s rivers were the main route for commerce. The Holston River provided White a gateway to the Tennessee River which was the natural highway for commerce into the Tennessee Valley. Not only did White master the transportation, distribution and retail sale of salt, he also controlled salt production, thereby giving him a total monopoly on salt across a large geographic area. In 1812 White opened one of his first of many mercantile retail stores in Huntsville adjacent to today’s Madison County Courthouse.

Huntsville became White’s second home. His business success in Huntsville and the Tennessee Valley made him one of the wealthiest men in America. At that time, circa 1810, Alabama frontier towns were located almost exclusively along the rivers and included the Alabama towns of Bellefonte, Gunter’s Landing (now Guntersville), Whitesburg at present day Dittos landing, Triana, Decatur, Florence, Town Creek and many others, along the 652 miles of the Tennessee River. James White personally owned and operated 55 mercantile retail stores mostly along the Tennessee River in these and other river towns. His business enterprise was the “Walmart” of the early 1800s.

The Cotton Port Plantation in Limestone County: Acquired by James White circa 1815 this property has an unusual family story. It was located near the river town of Cotton Port. Cotton Port, near Mooresville, was abandoned in the as a town because of frequent flooding by the Tennessee River. This plantation was west of the town of Mooresville and was bounded on the south by the Tennessee River. It was located in one of the most productive cotton producing areas of the south.

James White traded salt for this valuable land in the Tennessee River Valley. Madison County Records show that J.W. Lane traded a large tract of Limestone County land near Mooresville to James White for 30,000 bushels of salt. Part of this tract was Section 11, Township 5, Range 4 West, which juts out into the Tennessee River. Milton White, son of James, sold this section to Luke Matthews. Matthews later willed the land and that adjoining it to his daughter, Lucy Spottswood Matthews.

After Lucy's marriage in 1876 to Huntsville attorney David Irvine White (1853 – 1935 and grandson of James White), the property was again in the White family. It is believed that Lucy, who lived her life in Huntsville, never visited this idyllic spot, called The Cave Place after a cave was discovered on the property. A log cabin, evidently built as a caretaker's cottage, formed the nucleus of the Cave Plane home structure, but its date of construction is not now known.

David and Lucy’s youngest son Gilbert G. White Sr. (1890 – 1971) took possession of the property years later and continued to produce cotton. This property left the White family circa 1940 when Gilbert purchased the Bibb family Woodside plantation in Belle Mina. Earlier, Woodside had been the property of John Witt, the father of Gilbert’s wife Adie. John Witt was recognized by the state as one of Alabama’s “Master Farmers”. Woodside was originally one of two Bibb family plantation and antebellum homes in Belle Mina.

White’s domination of the salt market lead to him being called the “Salt King of Abingdon, VA”. To survive in frontier Alabama families had to buy large quantities of salt each year. If you bought salt in North Alabama in the early 1800s you bought it from James White. He accumulated great wealth and acquired vast land holdings along the Tennessee River in both Tennessee and North Alabama that later became profitable family plantations in Jackson, Madison and Limestone counties. White founded the town of Whitesburg in 1824, just south of Huntsville. Whitesburg was on burned July 28, 1862 by Union forces leaving many families homeless.

Over his life James White made many extended visits to Madison and Limestone County from his home in Abingdon, VA. With his slaves, employees and sons he traveled into the Tennessee Valley by flat barge river boat transporting salt and other goods to his chain of retail stores. His return trips back to Abingdon were on horseback. His land holding were so extensive that during the 337 mile trip from Huntsville to Abingdon he could always overnight on property he owned. It was said he lived in the saddle and was a driven enterprising entrepreneur with boundless energy. He spent much time in Huntsville away from his Abingdon home. James White and his wife Eliza had 7 sons and 3 daughters. Three of his sons, Addison, Thomas and Francis graduated with law degrees from Princeton University and other Ivy League colleges. They later managed his retail businesses and plantations in the Tennessee Valley and beyond as far as Marvell Arkansas.

James White was a Colonel in the War of 1812. His ancestors and decedents fought in all major American wars and they were officers in the Continental Army - brave men and women who shaped our nation and state. James White’s descendants include many notable people who are accomplished in their own right.

When James White died in 1838 at age 68 his estate was valued at over $700,000. He was born into a modest Pennsylvania farming family and departed this world as one of the wealthiest men in America. His life’s accumulated business and personal activities are well documented in his family papers that are maintained for historical research in the Special Collections Department at the University of Virginia library in Charlottesville, VA. 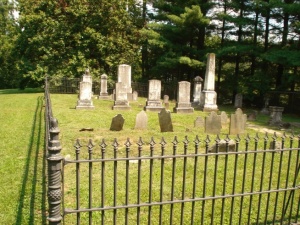 Today it has been 206 years since James White arrived in Huntsville on his first visit to the Tennessee Valley aboard a flat bottom riverboat. He and other family members are buried in the small private White Family Cemetery atop a beautiful hill in the heart of Abingdon, VA. Many of his descendants are interred at Maple Hill Cemetery in Huntsville, the oldest continuously operated municipal cemetery in the southeast United States. Maple Hill Cemetery connects all generations and brings focus to Huntsville’s rich heritage and our people who are gone but not forgotten. James White is one of many notable Huntsville citizens that are characterized and portrayed at the annual Huntsville Maple Hill Cemetery Stroll in October of each year.

From their Scottish ancestral roots, and their beginning as forced indentured servants who were sold to work on plantations in colonial America, James White’s family produced many remarkable and successful Alabama citizens. Huntsville carries James White’s footprint today with Whitesburg Drive, White Street and the community of Whitesburg, all named after him - Huntsville’s first entrepreneur, an Alabama frontier industrialist and the Salt King of Abingdon, VA.