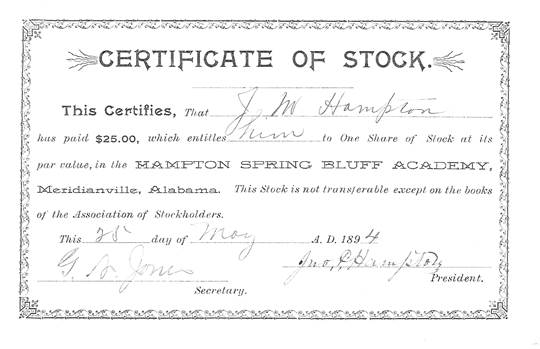 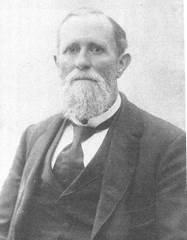 •  Deed copied from Record Book XXX, page 225-230 found in the Madison County Courthouse Records Room, Huntsville, Alabama.
•  Stock Certificate given to author by Betty Wikle Ratchford Merchant, great-granddaughter of John M. Hampton.
•  Pictures of “The College” copied from the originals found in the Huntsville-Madison County Public Library. Thanks to William Sibley for informing the author of their existence and the following news article, also.
•  Newspaper Article copied from The Weekly Mercury, February 9, 1910, page 4 found in the Huntsville-Madison County Public Library.
•  Diploma was copied and given by Joe Oliver, Redlands, California, grandson of Fleming White.
•  Picture of the Bluff Picnic Area was in possession of the author probably made by her mother who was a principal at the Meridianville School in the early 1940’s.
•  Picture of Fleming White was in the possession of the author. It is about 2 x 4 inches printed on card stock with the following on the back: “So-Kute Photos. Only 25¢ A Dozen. How to Get Them. Send any ordinary photograph WELL WRAPPED, with 25¢ and a 2-cent stamp. I will promptly return the original photo with 12 “So Kute” Photo copies, same size as this, Post Paid to any part of the world. Groups same price. No TIN-TYPES copied. J. M. House, Photo Studio, Gadsden, Ala., U. S. A.”
•  The unfinished and unpublished draft copy of, The History of the Schools of Madison County was found in the Huntsville-Madison County Public Library. This was a project begun to collect pictures, records, etc. and record for posterity The History of the Schools of Madison County by a group of teachers. Thanks to William Sibley for informing the author of this source and its location.
•  Grimwood Sketches, 1562-1982, The Lineage of William H., Isaac O., & Joseph C. Grimwood, page 126 by James Maurice Grimwood, Houston, Texas, 1982, published by McDowell Publications, Utica, Ky 42376.