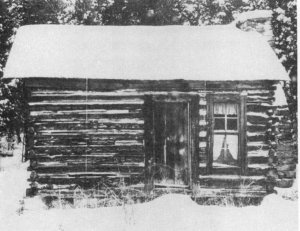 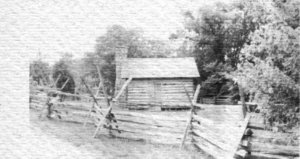 From The Historic Huntsville Quarterly of Local Architecture & Preservation, Spring, 1994, Volume XX, No. 1.

Among the guidebooks available to the public, this Quarterly is most obliged to the "Burritt's Historic Park Guide Book" written by Charles Pautler, Curator of History. Charles has generously shared his considerable knowledge of these log structures. Newspaper clippings in The Heritage Room of the Huntsville Library also bear witness.

Madison Baptist Church - Removed from the City of Madison in 1977, this 1884 church occupies a prominent place on the museum grounds. Its double front doors welcome one and all. Century-old poplar siding was retacked on the frame after the Burritt staff had meticulously disassembled the building for removal. This process of disassembly, removal and reassembly consumed three years. It is fitting that the church looks out on the Samuel Balch Log House, as Balch was Deacon of the church when it stood at the corner of College and Sullivan Streets in Madison.

Balch Log House - A simple dog-trot constructed in 1887, the Balch House grew along with the family as needs and means dictated. Originally built by Samuel William Balch, a Madison county resident from 1852 until 1934, the house was located at what became the intersection of Wall- Triana and Capshaw Road.

By 1899, Balch and his wife, Martha Parsons Balch, had parented 12 children. Their dog-trot grew to accommodate. It was covered with clapboard, the trot enclosed by a front door with transom and sidelight. At that time, Sam Balch added a second half-story for two bedrooms. The girls' room was located over the parent's bedroom and joined to it by a stairway. The boy's bedroom was directly accessed by a stairway from the dog-trot below.

Balch added two porches also. The front porch shaded the two ground windows and gave dignified symmetry to the enlarged structure. The back porch stretched the width of the house. It was enclosed to house the Nebo, Alabama post office on one end and a dinning room at the other end. To this he added an "L" extension for the kitchen and pantry.

The original hand-split shingle roof was replaced by a metal roof.

No doubt because of these early preservation measures, the house was still in good enough shape to be saved for future generations. It is the pride of the park's folk structures.

Smith-Williams Log House - This dog-trot was originally located at the eastern base of Monte Sano in McKay's Hollow. It was built in 1867- 1868, by James Bascomb Williams for his new wife Victoria Ann Smith. The second pen came from Victoria's family who lived nearby. It was added at about the same time. Both structures dated back to the 1840's and joined together upon marriage became a dog-trot with a romantic future. The master bedroom occupied one pen with parlor and sleeping loft for the children. Good smells emanating from the other pen would easily identify it as the kitchen. The Delbert Williams descendants gave the dog-trot to the Burritt.

Single Pen Cabin, Tenant Farmer. Circa 1830 - Originally located off Hobb's Island Road for over 100 years, this share cropper's cabin was donated by Leland Gardiner. It made the trip up the mountain in February 1988, arriving in one piece.

This most basic of all log structures features a single "pen" enclosed by partially hewn logs joined by crude saddle notches. This particular cabin was taken apart twice before arrival at Burritt. The space between the logs consisted of "chinking," composed of wood splints or stones, combined with a mixture of "clay, animal hair, straw, or lime mortar" used for "daubing."

Pautler provides insight into this particular cabin's past:

"According to Gardiner family history, the cabin was thought to have been built circa 1830, on the crest of Wallace Mountain, in South Madison Country overlooking the Tennessee River. It was then tom down and reassembled on the William Gardiner plantation for use as a slave quarter sometime around 1850. During the 1870's, Daniel Sibley, a former slave and Union Army veteran, moved the cabin to a different location on the plantation grounds where he was able to earn a meager living as a sharecropper with his wife and two sons."