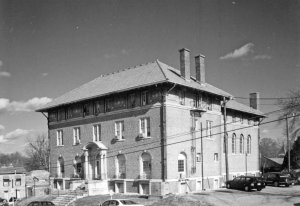 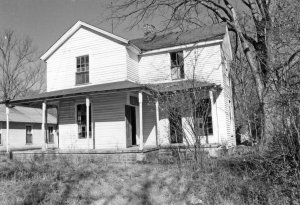 Greene Street is properly spelled with a final "e" per its namesake, the Revolutionary War General Nathanael Greene. An error in legal papers has apparently changed it to "Green" Street.

This 3-1/2 block stretch contains only four buildings whose addresses are on Greene Street. No. 213 is a modest modem rectangular tan brick two-story office building of about 1966. The YMCA at No. 203 is a fine 1910 work by the Huntsville architect Edgar Love, and is in a Mediterranean style of Italian influence. The third floor dormitory windows are contained within a broad decorative frieze with diamond-tile inserts in brick panels. The green glazed ceramic clay-tile roof with exposed rafter-tails has wide eaves of about four feet. The stone entry portico with Tuscan columns and arched roof is of Renaissance classical influence. The only significant exterior change is the c. 1970 covering of the first floor fanlights with plywood and the removal of the French windows at the 8 balconies in favor of characterless and awkward square sashes. The French windows are stored in the basement. The internal lobby, less some makeshift modem partitions, is almost completely intact, including an attractive "arts and crafts" fireplace. The fixture of the building is in question, as the YMCA intends (in 1997) to move out to gain land for outdoor activities. An adaptive-use of the building for offices would be logical and suitable.

The early 20th century neo-classical 1910 McCalley house at 310 is a well-designed and well-built residence. Ironically in the early 1960s Urban Renewal Program it was slated to be demolished for a parking deck. As is true of most early 20th century neoclassical, the design is a free play on classical motifs with no attempt to adhere in detail to any particular historical examples.

The 1980s Joffrion Hall of the Church of the Nativity fronts on Greene Street and is designed to harmonize with the earlier Gothic Revival buildings.

South Greene Street is separated from Greene Street by the block between Williams and Cruse. It was not opened until after 1871, per the 1871 View. In 1972 it contained a small Federal Period frame house that had been moved there (703) and expanded in a late-Victorian manner. By a lapse in communication, this early house was mistakenly demolished in 1974 by the City Minimum Housing Office at the request of its owner—a sad loss of a very rare type, now non-existent in Huntsville, with attendant loss of the little Federal Period house at 306 Banister Alley, the only other such example.

In the early 20th century South Greene Street was a housing area for servants for the adjacent large houses on Adams and Franklin Streets. Three tiny frame duplex houses of c. 1900-1925 appearance and one converted carriage house of the same period together with the moved early 19th century house were the only buildings on the little back street. The carriage house, No. 606, has been nicely remodeled, but the three small duplexes are gone. The street now has six Colonial Revival houses of the 1972-86 period and a modem house (No. 707) built in 1974 in materials (clapboards) and forms (wide-eaved bungalow type roofs) that harmonize with the neighborhood without copying its predecessors.

South Greene Street contains, in effect, all late-20th century houses and can, if preserved, best illustrate that time period in the future.