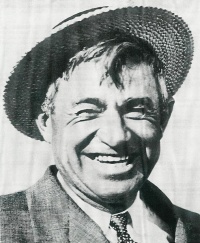 Will Roger’s more remote maternal ancestry for many years has been a mystery. His mother and her parent’s were well known but then it all became more uncertain and largely unknown. This paper will present new and conclusive evidence as to the identity of Will's maternal grandfather's father. It will be arranged in three parts. The first is a review of the known information from official sources, two from the Will Rogers's Memorial in Claremore, Oklahoma and one from the Cherokee Heritage Center at Tahlequah, Oklahoma. In the second the new evidence is presented. The third section presents some additional circumstantial evidence concerning this new great-grandfather's life and relatives and provides a direction for future research.

The three official sources are all well documented and reliably establish Will Roger's ancestry and largely agree with each other but are somewhat abbreviated on his maternal side.

The first, Will Rogers Official Genealogy and Bibliography, was researched, assembled, and written by Pat Lowe, archivist-librarian for the Will Rogers Memorial Commission.[1] It states the following:

Pat Lowe does not list parents for Martin Matthew Schrimsher but suggests on page 15 that his father might be Jonathan Schrimsher, an unsubstantiated conjecture that has made the rounds among Schrimsher genealogists. Yet, on page 22, she does not list Jonathan but does refer to a letter from a descendant of Larritt, a sister of Martin M. Schrimsher, which lists the following as his siblings. 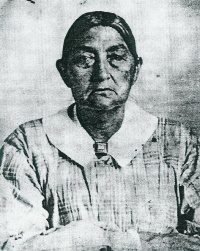 The second official source, Climbing Will Rogers Family Tree, was written by Dr. Reba Neighbors Collins, past Director of the Will Rogers Memorial.[2] She had access to the materials collected over the years by Paula McSpadden Love, Will Roger’s niece, who was Curator of the Memorial from 1938 to 1973. Dr. Collins' material differs only slightly from that of Lowe's. Collins shows Ann E., child of Martin’s first marriage, birth year as 183-. The second difference is the birth year for John Gunter, the first child of the second marriage, as 1835. This date is the same as on his tombstone in Woodlawn Cemetery in Claremore, Oklahoma. Two other differences, Dr. Collins has no birth date for Elizabeth Alabama. Dr. Collins lists the same siblings for Martin, but not in the same order as Lowe and states that they may not be listed by birth order. Importantly, Dr. Collins writes, “The family seems to have left Blount Co., Tennessee sometime after the birth of Martin M. in 1806, moving to Blount Co., Al where they were living when Martin married Elizabeth Hunt Gunter of nearby Creek Path, Alabama.” This traces Martin and his parents to specific locations in Tennessee and Alabama where more information has been found, which will be presented later.

The third source, a paper entitled “Descendants of Martin Matthew Schrimsher”, published by the Family Research Center of the Cherokee Heritage Center in Tahlequah, Oklahoma, varies only slightly from the other two. This source adds Sarah Catherine to the list of children of Martin and Elizabeth. This addition is reliable having been found in census record # 374 of the Drennen Roll of 1852 and listed in Dr. Emmett Starr's History of the Cherokee Indians as pointed out by Gene Norris, Senior Genealogist of the Cherokee Family Research Center.[3] There is no reference to parents or siblings for Martin in this paper.

A recent discovery in the National Archives in Washington D. C. disproves the belief that Jonathan Schrimsher was the father of Martin M. Schrimsher.[4]

During the Indian Removal to the West, the United States Government ordered evaluations of the vacated land including improvements of the Indian families to allow compensation. Martin Matthew Schrimsher, although a white man, had a wife and children of Indian descent and moved to Indian Territory. Hence, his property in Alabama was part of the evaluation, contained in a three page document in the Archives.

The first sentence of page one reads: “Residence one mile west from Creek Path Missionary." Amos J. Wright Jr. in Historic Indian Towns in Alabama, 1540-1838 states that Creek Path was located in Brown’s Valley on the east side of Brown’s Creek east of present day Guntersville, Marshall County, Alabama.[5] The site is now inundated by Guntersville Lake. In 1822 the Methodists established a school and mission at Creek Path.

The remaining part of this first page and the next two are a listing and evaluation for each of Martin’s properties and their improvements, i.e. dwelling house, cabins, corn cribs, barns, smoke houses, stables, pastures, gardens, potato lots, cotton and corn fields, and extensive orchards. Total property evaluation was $2,350.

The identity of Martin Matthew Schrimsher's father is clearly stated in the first sentence at the top of the last page. It reads, “Improvement occupied by his father, James Schrimshear_" This reliably adds a great-grandfather to Will Roger's Maternal Ancestry.

This section will present additional bits of information and circumstantial evidence concerning the life of James Schrimsher: his children, potentially his wife (hence another great-grandmother of Will Rogers), and, almost certainly, a brother.

The official sources, reviewed in the first section, list the names of the siblings of Martin Schrimsher, i.e. the children of James Schrimsher. This information was from a letter received from a descendent of one of these children, Larritt, and hence is reliable but nothing further about them was given: where they lived, where they were born, etc. The following is information about them and their connection to James Schrimsher.

The 1850 Census for Muddy Bayou, Conway County, Arkansas lists three of the siblings of Martin: David, John and Larritt were living on adjacent properties with their families.[6] Listed with David's family is a Jane Schrimshear, age 70, born in Tennessee. Although far from proof, it is consistent with early census records that this woman was the mother of these siblings and the widow of James Schrimsher. In the East Tennessee Census of 1830 for Monroe County, James Schrimpshire was 50-60 years old with a wife 40-50.[7] In the 1840 Census for Marshall County, Alabama, James Schrimshaw was 60-70 with a wife 50-60.[8] Schrimshear, Schrimpshire and Schrimshaw are a few of the many spelling variation found for this family.

James must have died shortly after the 1840 census. Papers for the administration of his estate were filed in December of 1840 in Marshall County, Alabama, continuing into 1841. Unfortunately he must not have had enough property to divide as there was no estate settlement or a listing of heirs or mention of a wife.[9] This lack of property is consistent with the new information that James was living on holdings owned by his son, Martin.

Not only was evidence found of Martin being in Marshall County, Alabama but also some of his siblings. Larritt Schrimsher and David Anderson Fowler were issued a marriage license on 20 Mar 1844 in Marshall County.[10] Robert C. Schrimsher, listed as an early settler of Marshall County in 1844, was issued a Land Grant #7996 on 01 Jul 1845.[11] James M. Gee, assignee of David Schrimsher, was issued a Land Grant # 8148, 01 Oct 1845.[12] These two grants were for adjoining properties and were sold on 07 Mar 1845 to John Brooks.[13] (This seems to be a case of “after acquired title”, in which a deed was executed for land before taking out the grant. When the grant was issued, title to the land immediately passed to the grantee in the deed.)[14] Perhaps Robert and David entered into these transactions to gain enough money to take their families to Arkansas by 1850. No census record has been found for Robert, but two of his children, Sam and Ad, were found later in Arkansas and Sam owned land in Faulkner County.[15] This suggests that the Schrimsher families moved to Arkansas between 1845 and 1850.

Recently in a personal communication from Shirley Carr, Jacksonville, Arkansas, a descendent of Larritt, wrote that she had found a piece of paper listing some of her ancestors that was tucked in her grandparents' bible. She was uncertain but believed its origin was from one of Larritt's sons, David Baxter Fowler, Shirley's great-grandfather. The paper included a list of Martin Schrimsher's siblings that are the same as the official sources except for the order and Tilda was omitted.

All three of the official sources state that Martin Schrimsher was born in Blount County, Tennessee in 1806. Consistent with this, a long series of Court Cases between 1807 and 1819 are found in this county, to which James Schrimsher was either a party or a witness.[16]

Further, during this period, James obtained two Land Grants, No. 865 and No. 1004.[17] These land grants were on Nine Mile Creek in the French Broad-Holston area of Blount County, Tennessee. They were dated the 4th and 10th day of May, 1810. Land Grant No. 1004 was granted to James Schrimshire, assignee of Elizabeth Steel, Executrix of Joseph Steel. Making James an assignee implies a close relationship between James and the Steels. Perhaps Jane Schrimsher, born in Tennessee, mentioned in the 1850 Census in Arkansas, and who seems to be the wife of James, was the daughter of Joseph and Elizabeth Steel.

Also evidence presented in the following paragraphs was found implying that James Schrimsher had a brother named William. The property description within Land Grant No. 865 states, "…49 and ¾ west eight chains then with William Schrimshire south sixty four west four chains north…" Many other Schrimsher researchers believe James and William to be brothers. William came to Madison County, Alabama, the county just north of Marshall about 1820. He and his wife Elizabeth raised their children and died in Madison County in the 1850s.[18]

One additional piece of evidence indicating James and William were brothers is an application for lands and funds due individuals of Indian descent dated 22 Sep 1896, several petitioners are listed. On the coversheet are the signatures of R. J. [Russell James] Schrimsher, Green Schrimsher and one illegible one, believed to be Wiley, [Jr.]. All three are grandsons of William, children of his son, Wiley, [Sr.] The application stated, "The petitioners claimed to be a mixture of white and Indian blood from their father, the late Wiley Schrimsher, who claimed to be and also his characteristics showed him to be about one fourth Cherokee Indian Blood: that the same Wiley Schrimsher was the son of Wm. Schrimsher and your petitioners had been informed by their father and others who knew the said Wm. Schrimsher [two words illegible] complexion and appearance was that of an Indian; and, your petitioners had been informed [illegible] when [illegible] Schrimsher who was petitioners cousin, married in the 'old Gunter family' who lived in the old Cherokee nation now known as Madison and Marshall County, Alabama."[21] As stated in the official sources in the first section of this paper, Martin married Elizabeth Hunt Gunter. The last illegible name in this application is, therefore, very likely Martin.

The important discovery that Martin Matthew Schrimsher’s father was James Schrimsher has the further significance of linking them to a whole body of research done on the Schrimshers that includes William, James’ brother. Although beyond the scope of this paper, this research, with varying degrees of reliability, identifies other relatives of James and William, including their father and paternal grandparents.