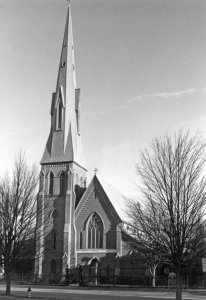 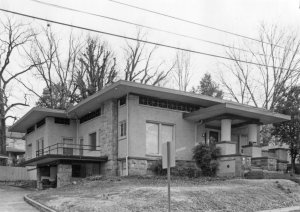 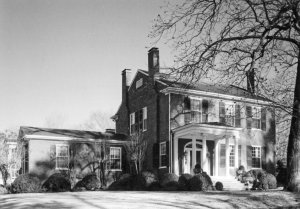 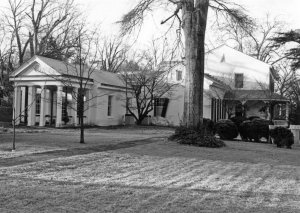 Eustis Avenue is a one-half mile long street containing over 50 buildings that are within the historic district, ranging in age from 1830 to 1978, representing almost every style except Greek Revival, and even that is present in the 1844 east and south wing additions and renovations to the 1836 White house at No. 612.

Eustis Avenue begins at the southeast comer of the historic 1805 Courthouse Square and runs east to California Street. The first building at the Courthouse end is the 1833 Bierne Building (as designated on its rain-leader head) which, except for window modifications, appears much as it did in a photograph made between 1866 and 1872. The next building, No. 206, was built in 1866 for Peter J. Kaufman, per the extant construction contract. It is most unusual to have a building built so soon after the Civil War. Its lower facade was carefully restored in c. 1986 per the detailed contract and a c. 1870 photograph. The next building, No. 208, was built between 1866 and 1872. (It is not present in the c. 1870 photograph, and its east second-floor windows were blocked in 1872 by the construction of the adjacent Dentler building.) Its facade was restored in 1997 by clear site evidences, the late 19th century Sanborn maps (showing the balcony size) and a c. 1950 photograph showing one edge of the facade. These three buildings and the 1840s Mercury Building on Franklin Street are the most intact commercial buildings in the District.

At the comer of Eustis and Greene Streets is Huntsville's only historic building that is designated a National Historic Landmark, the highest rating for historic buildings. (Several early rocket test stands at Marshall Space Flight Center also have this designation, but these are not "buildings" for human use.) The 1859 Church of the Nativity (Episcopal) was designed by the internationally prominent architects Frank Wills and Henry Dudley, originally of England and later of New York City, who were prominent in the English (and subsequent American) Ecclesiological Movement wherein an effort was made to turn away from the Renaissance influence (Italian) and return to the Gothic style, felt by the Ecclesiologists to be the true English style. The Church of the Nativity is a quite literal representation of a small English parish church of the medieval period. Records and evidence indicate that its pews and stained glass are 1859 originals, a rare survival for historic church buildings. Except for the mid-20th century installation of an organ chamber and a deepening of the chancel platform, the interior of the building is almost completely intact. The beautiful cast iron main gate and north fence are also apparently of the 1859 period. Reflecting that 1859 was a period of industrialization, the gate and fence are catalogue items. Their 1850s twins are in a Mobile cemetery, and probably at other locations.

Next along Eustis Avenue (No. 304) is another unique example for the District, an early modern (c. 1940) institutional building, the Madison County Health Department. Its asymmetrical assemblage of blocky, flat-roofed forms, strip windows, steel sashes and thin cantilevered concrete entry-canopy are characteristic of the "International" style and period.

At 406 Eustis is the District's only example of the Prairie Style, the 1921 Jeremiah Murphy house. Its rare "umbrella roof is described in the chapter on Architecture.

The mid-section of this long street was called "Maiden Lane" on the late 19th century Sanborn Maps, probably because the Gothic Reviva Huntsville Female Seminary was once at 515 Eustis. The south edge of the street was part of the large grounds of the 1814 Leroy Pope house until about 1920, and thus all the houses in that area date from post-1920 until one comes to the 1850s Fearn house at 504. No. 504 combines the Italianate influence with a Tudor-arched Gothic Revival verandah. The verandah was carefully reconstructed in 1978 per a historic photograph and traces at the site, and replaced a 1920s Bungalow Style verandah. The inappropriate "X” railings on the reconstructed verandah were added after 1978 and are not per the historic photograph.

At 512 is the beautiful Gothic Revival c.1843 Mayhew house with large, lacy scroll-sawn barge-board eaves and verandah brackets. The 1830 Lewis-Clay house at 513 is an almost completely intact staid and dignified Federal Period example (with a 1940s west wing). Its small Ionic order portico appears to be original.

At 502 is an "infill" house built on a vacant lot in about 1976. Its double-tier portico with paired boxed tapered Tuscan columns is influenced by Italianate examples.

The 1836 White house at 612 Eustis Avenue retains an original service building, the south part of which is a two-level smokehouse. The original small classical Federal Period Tuscan-order entry portico was moved to the back of the house in 1893 and the present ell-plan Victorian verandah took its place on the front.

The old granite curbs are still present along Eustis Avenue, and the brick paving, which can be seen at the gutters, extends completely beneath the modem asphalt topping. These features appear to date from the 1920s.

A walk along Eustis Avenue will give a wide and interesting sampling of one and one-half centuries of American architecture of commercial, religious, institutional and domestic buildings. 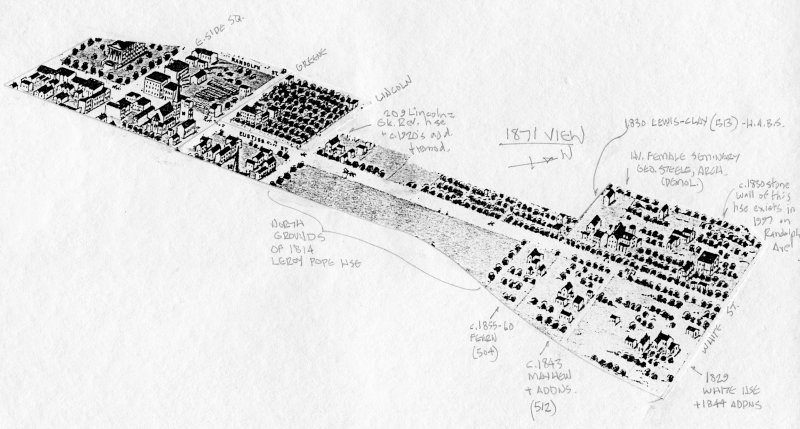