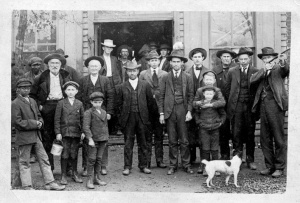 E. T. Martin at right, holding cane as if a rifle 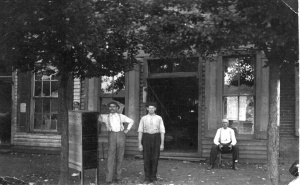 Elijah Thomas Martin was a younger brother of Madison’s first merchant and initial lot owner, George Washington Martin. Both were children (along with 9 other siblings) of Richard Martin and his wife Lydia East Pass Fitts Martin. Lydia was a daughter of Walker Fitts, who married Susannah Pass. Susannah died in 1849 while living in Richard Martin’s household, so Elijah Thomas Martin (who was born in 1833) grew up with his maternal grandmother until he was 16.

The Martin family came to the area in 1805 per old letters when Richard’s father Frank Ephraim Martin won a tract of the Indian lands in the Georgia Land Lottery. Georgia claimed the land and sold or otherwise allocated much of it before the United States government declared the Georgia deeds as null and void in order to settle numerous disputes and court cases arising from multiple sales of the same lands to different settlers. Frank, Elijah’s grandfather, fought in the Revolutionary War, and there are indications that he came to the area from Virginia with brothers Andrew and Jesse. The wagon train included the families of William East, Jesse Fitts, William J. Canterbury, and Elisha Rainboll (or Rainbolt, according to some spellings) -- all of whom settled on the east face of Rainbow Mountain. In fact, it is likely that Rainbow Mountain drew its name from Elisha Rainboll, as settlers inquired about who owned the north face of the mountain while they passed along the old settlement trail between Huntsville and Athens, now called Highway 72. The connection of the Martin and Fitts families with William East is not yet known, but since Lydia’s second name was East, there almost certainly is one.

Elijah Thomas Martin inherited a large tract of land from his grandfather, according to family records. He was also remembered as raising a lot of corn that got converted to whiskey in his hidden still, in order to support a quart per day habit that he had – as well as treating his friends and business acquaintances. In spite of his love of the spirits, nobody ever reported seeing E. T. (also known as “Uncle Lige”) under the influence. In fact, E. T. was so well liked that he became a Justice of the Peace in Madison for over 50 years. When he held court on his porch, he often made up his mind about the verdict long before the opposing attorneys finished their arguments. He would simply jot down his decision on a small piece of paper and leave it with the lawyers, advising them to consult it after they finished debating the finer points of their cases. At such times, E. T. would depart to join his friends in a game of Rook that always began at a store along the tracks at 4 p.m.

E. T. was well educated for his day, and he had begun to study law with an attorney in Huntsville when the Civil War started. He immediately left the practice and joined the Confederate forces. Family sources say that he rode with General Nathan Bedford Forrest’s cavalry as a sharpshooter. In his later years, he was the subject of an article in a Birmingham newspaper that reported his claim to have killed more turkeys than any other man in Madison County. He stated that he had many times stood in front of his brother George’s store and shot turkeys from trees behind the railroad depot. E. T. also was an accomplished horseman, having imported special breeds and performed riding tricks at town celebrations and picnics. He was at least 6 feet 4 inches tall, and often sat in front of the Main Street stores to tell stories of the old days, as he had lived in the area before Madison was founded, and he saw its growth throughout the 1800s.

E. T. died in 1925, having outlived 6 wives. His wives are buried in the old section of the Madison City Cemetery, with last wife Rosa Hill beside him. She was the daughter of Judge William W. Hill, who also served in the Confederate military and is buried beside Rosa. Perhaps one of E. T.’s finest legacies derived from his love of Greek mythology and legends. When local families asked him to suggest sophisticated names for their newborns, E. T. was fond of using names from early Greek literature. Thereby he introduced into the Madison area unusual given names for generations to come -- names such as Agamemnon, Menon, Antigone, Socrates, Plato, Homer, and others. Madison’s “E. T.” was truly a uniquely intriguing citizen of the early days.