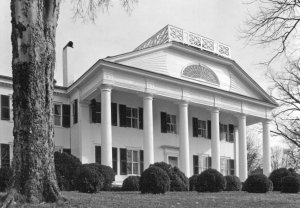 Echols Avenue is a street of twentieth century houses (with the exceptions of the 1814 Leroy Pope House and the 1833 Dickson House, moved here in about 1980 from North Lincoln Street to save it from demolition). This land was part of the large estate of the 1814 Leroy Pope House and remained open until Echols Avenue was built in the early twentieth century.

The Leroy Pope House (403) is thought to be the oldest documented house in Alabama, its date being established by an 1814 newspaper item about a reception at Mr. Pope's "newly constructed residence". The house originally had no portico, per the ample site evidences, and many Federal Period houses had none. Records indicate that the large portico was added by the architect George Steele in the mid-1840's. The portico is a fine example of an architect designing a later element of a different order of scale than the original delicate and porchless Federal Period house and doing it in a complementary rather than a clashing way (the usual result of adding a large portico to a Federal Period house). The portico uses Federal style elements such as sunbursts, Tuscan columns and a fanlight with delicate tracery, but these elements are magnified to giant scale to fit the proportions of the two-story high portico. This inspired approach works. A visiting architectural historian who once viewed the house was uncertain if the portico was added or original.