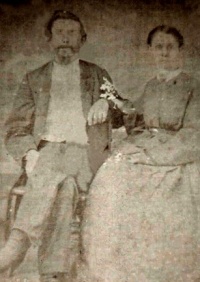 Doctor George Richard Sullivan was born in January of 1838 and raised in the Berkley community, an area near New Hope. His father, Isaac, was a physician from North Carolina, and his mother Mary was from Virginia. By the age of 21, George was listed as a physician in the 1860 census, still living in his father’s household. However, in 1869 he purchased Lot 10 along the railroad tracks on Main Street, and he was serving as a City Councilman when Madison Station was incorporated as simply “Madison”. He later lived at 4336 Sullivan Street, when it was called the Huntsville – Decatur Road. Madison’s Sullivan Street is of course named in honor of the doctor, who treated patients in Limestone and Morgan Counties, as well as in Madison County, during his long medical career. In 1862 George married Sallie Polk Walls, whose family is believed to connect to President James Knox Polk and the local Wall family for whom the Wall-Triana Highway is named. They had a son named Oscar Washington who was struck by lightning and killed at the age of 20 while plowing a field at Nubbin Ridge, the area around the junction of Burgreen Road and Brown’s Ferry Road. They also had a daughter named Nellie who died at age 8 and has a unique tombstone with shoes on the top of it in the old section of the Madison City Cemetery along Mill Road near Hughes Road. The Sullivans had 12 children in total, with 9 of them reaching maturity. A child Jessie was born and died on the same day in 1871. Sallie died in 1917, but George survived until Valentine’s Day of 1935. In his latter years, Dr. Sullivan moved his practice to Decatur, where he lived with daughter Inez S. Harvey and her family, while continuing to treat patients into his early 90s, but he is buried in Madison beside his wife, Oscar, Jessie, and Nellie.