Did You Know? The Million Dollar Band

Reprinted from the Merrimack Mill Village Newsletter – April, 2010
Did You Know? articles provided by Jim Marek.

Did you know that our Merrimack Mill Village had a band at one time? Although officially named the “Joseph J. Bradley, Jr. Band”, they became known in the area as “The Million Dollar Band” thanks to J. Emory Pierce, editor of “The Huntsville Daily Times”, who after hearing them play referred to the band by that name.

The band was the idea of a group of musicians in the Village and organized in the summer of 1925. Upon hearing about the band, the Merrimack Manufacturing Co. took an active interest and purchased the instruments which were expensive and hard to come by in those days. As such, the band was officially named after Joseph J. Bradley, Jr., the agent of the Mill at that time.

The band’s first concert was in the auditorium of the Joe Bradley School in the fall of 1925. Soon after, the band became very popular. They played a number of years at the Madison County Fair and the Lincoln County Fair and were called to play at several local dedication ceremonies – including the dedication ceremonies for the Decatur Bridge, Whitesburg Bridge, and the Scottsboro Bridge. The band didn’t just play locally. They travelled with many organizations to engagements in Montgomery, Mobile, and Dothan and played over radio station WSM in Nashville. They even played for United States Senator Almon who was guest speaker at a celebration in honor of the Confederate Veterans held at the estate of Miss Virginia McCormick here in Huntsville. The group disbanded after nine years in 1934. 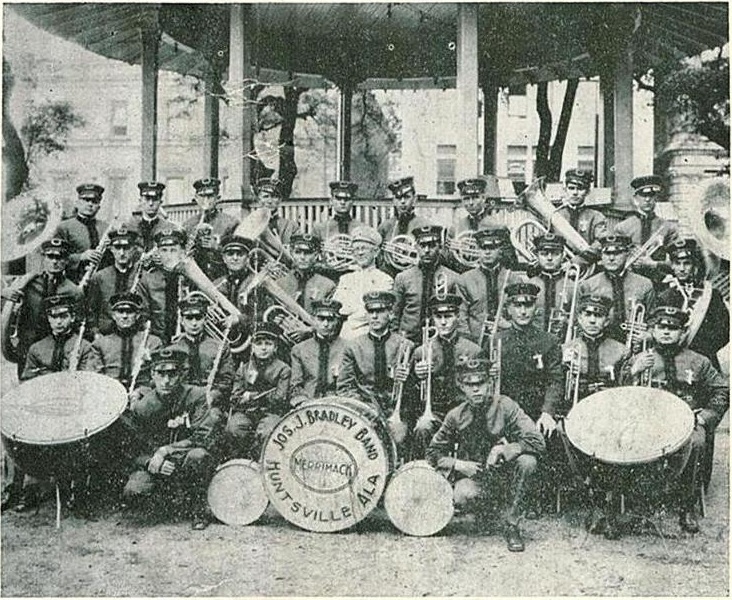