Did You Know? Hard Times at Merrimack

by Jacquelyn Procter Gray
Did You Know? articles provided by Jim Marek. 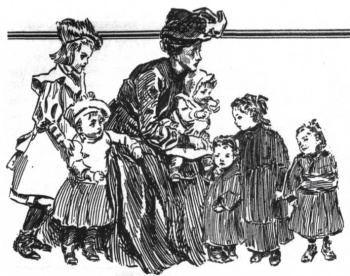 Thelma Guthrie was the youngest of eight children. She was seven years old when her family packed up their belongings in Tracy City, Tennessee to move to Huntsville, Alabama. An able-bodied person could find work in the mill villages, and families were moving to Huntsville as fast as they could for steady work. Thelma's father was a coal miner, and by 1925, he was ready to make a change.

The Guthries moved into a duplex in the Merrimack Mill community. The sparse home had three rooms, and a single naked light bulb hung from a chain in the center of each room. The company furnished coal for their heat. The mill children went to the community school and the families shopped at the mill store.

For the Guthries, it looked like the promise of steady employment and company benefits was a dream-come-true. Unfortunately, it was short-lived. Within a month, Mr. Guthrie had disappeared.

Without the family breadwinner, Thelma’s mother was desperate to take care of herself and the children. Mrs. Guthrie knew her husband had to be dead—he would never leave his family in such a desperate situation. But all she could do was wait for someone to find his body and bring him home.

Mrs. Guthrie went to the manager of Merrimack and explained the situation. He explained to her that the family would have to move out, since no one in the household was employed at the mill. She was devastated.

Fortunately, the manager was an understanding and sympathetic man. He agreed to let the family stay on if Mrs. Guthrie would promise that her eldest son would begin work at the mill in three months when he turned 16. Mrs. Guthrie took in washing and sewing and, as promised, her son went to work at Merrimack after his 16th birthday. He clocked in at 6 a.m. and clocked out at 6 p.m., all for the princely sum of $7 per week.

Everyone at the mill raised chickens in their yards, and the chickens ensured that no blade of grass would ever grow high enough to see the light of too many mornings. Many families had one milk cow, and the company pasture was located where Milton Frank Stadium now stands. At the end of the day, someone would retrieve the family cow and bring her home for the evening milking. The cow stayed overnight in a company-provided “cow house" behind the home. After the cow had been milked again the next morning, the children would lead her back to the pasture on their way to school.

One mile from the Guthrie home, the company provided acreage for each of the mill families to have a garden plot. Eventually, the company even provided pig pens so each family could raise their own pig. Today, that property encompasses a subdivision known as Holiday Homes.

As they got older, four of the five Guthrie children went to work at Merrimack. Thelma dropped out of school in the 11th grade. Her mother had cancer and died when Thelma was 16.

For all of those years, Mrs. Guthrie believed that her husband had died soon after they arrived in Huntsville. She always hoped he would be found. The sad day came when her children learned that their father had left Huntsville with another woman and gone back to Tennessee.

With their mother gone, Thelma’s older brother and sister became surrogate parents of their younger siblings. Her brothers left home to fight in World War II, and Thelma went to take a Civil Service test for a job at Redstone Arsenal. She was the seventh female to be hired at Redstone Arsenal.

Thelma married her GI boyfriend when the war was over. She went to work at Whitaker Clinic and then Huntsville Hospital. After 35 years, Thelma Guthrie Pendergraft retired from her job.

Much has changed in the 75-plus years since Thelma first came to Huntsville. She is the last of her family left. The mills are gone and the mill houses were sold off. Huntsville has become a high-tech bustling city, growing steadily farther away from the cotton fields, as one-by-one they succumb to the progress of pavement. Now the mills are closed or gone, and one day, all too soon, the memories will disappear, too.