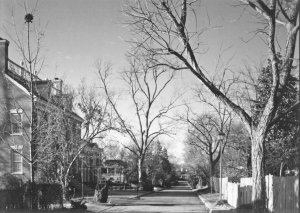 The 1861 map and 1871 view shows only two outbuildings on Cruse Alley, both long-gone. The oldest house (No. 7) on Cruse Alley was once a simple concrete block small house of perhaps 1940-50 origin, later upgraded to its present attractive Colonial Cottage design. The oldest building on Cruse Alley is probably the small board-and-batten bam (now apartment) at No. 3, that was an outbuilding for the 1836 Govemor Bibb House on Williams Avenue. Its date is unknown but is probably twentieth century.